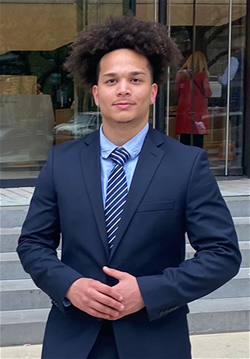 St. Bonaventure University senior Deandre "Dre" Allen is determined to push beyond all barriers to reach his definition of success.

Challenges are nothing new to this strategic communication major from Queens, New York, who was raised in a single-parent household. From a young age Allen has helped care for his younger brother while also pitching in to help their mom make ends meet.

“I was blocked off from a lot of opportunity while growing up,” Allen said.

He often wondered if college would even be a possibility. But the potential he showed in high school and his drive to succeed has made all the difference.

Admitted to St. Bonaventure through the Arthur O. Eve Higher Education Opportunity Program, Allen is the first of his family to venture from home and attend a four-year, private institution.

While he is flourishing in the final year of his undergraduate career, his path hasn’t always been smooth. During the start of his sophomore spring semester, Allen remembers repeatedly arriving late to JMC 202 taught by Dr. Denny Wilkins, a longtime professor in the Jandoli School of Communication.

“I remember not giving 100 percent effort,” Allen said. “Dr. Wilkins told me my lateness was disrespectful not only to him but to the whole class. He also told me there are people who never learn from their mistakes — and others who do.”

Allen spent that night thinking about Wilkins’ words. Wanting to be in the latter category, he apologized the next day.

“I told him I was sorry for everything and happy he had not given up on me. Dr. Wilkins looked at me and asked, ‘Why would I ever do that?’”

That kind of caring and commitment has been the hallmark of Allen’s time at St. Bonaventure.

He credits teachers like Wilkins, Professor Michael Jones-Kelley and Jandoli School Dean Aaron Chimbel for causing a seismic shift in how he views the world and the possibilities for his place in it.

“Each one of them has been a big part of my experience here. I’ve met a lot of great people because of them,” he said.

An introduction through Dean Chimbel lead to a marketing internship this semester with Vetted Solutions, an executive search firm in Washington, D.C. “I feel like I’m part of the team with them,” Allen said.

He also spent this past summer in the six-week study aboard Francis E. Kelley Oxford Program, which he called life changing. “I would do Oxford 10 times over again.”

Allen not only enjoyed England, he also traveled with five friends to Belgium and the Netherlands for a four-day weekend during the program’s midpoint.

“It was a crash course in making me realize I can do this sort of thing,” Allen said. “It made me realize I don’t have to be rich or older to travel the world. And it made me see that the world is bigger than what is around me and is filled with other cultures. It expanded my views in so many ways.”

Another huge opportunity for him has been serving as president of Kwerkworks, St. Bonaventure’s student ad agency affiliated with the American Advertising Federation (AAF).

Accompanied by academic adviser Jones-Kelley, Allen and his classmates traveled to New York City to compete in the National Student Advertising Competition. There he was able to meet Bona alumni who share similar interests and backgrounds.

“Seeing those people in positions that put them ahead in life inspired me to keep on doing what I am doing,” said Allen. “I want to carry on in their footsteps.”

Jones-Kelley truly believes he can.

“Dre can command a room by his sheer physical presence. He’s a big guy, tall guy. He has a big voice. He’s just not a guy you can ignore or overlook,” said Jones-Kelley. “I expect great things of him in the future. Fortunately, he does, too.”

Allen’s goals include earning a master’s degree in business, working for a major advertising agency and ultimately moving his mom out of his childhood home.

He still holds close to his heart the interaction with Wilkins during his sophomore year. Whenever he sees underclassmen struggling, he reminds them of when he used to be in their shoes.

“It’s about the choices you make from now on and how you correct them. You can fall down, but it’s all about how you get back up.”

Learn how you can help ignite and inspire students like Deandre Allen.