There are numerous opportunities for our students to put their classroom instruction to work without leaving campus. 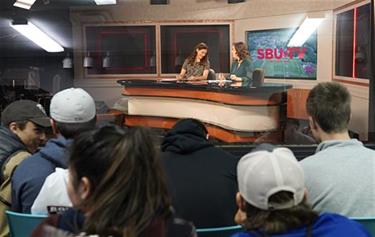 SBU-TV Sports offers students the chance to present journalism on the fly, directing and producing live sporting events for ESPN+. 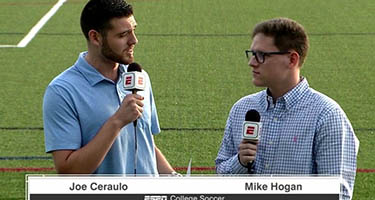 Imagine yourself doing play-by-play of Division I college sporting events on live television for hundreds of thousands of viewers on ESPN+.

Maybe you'd like to direct or produce a tournament basketball game, providing replays, doing courtside interviews, running a camera, or providing audio or graphics for telecasts.

Learn to do journalism on the fly by presenting live telecasts of Bonnies men's and women's basketball games in the famed Reilly Center Arena, or working on a telecast of baseball, soccer, lacrosse, or another of SBU's many Division I teams.

Our students work as part of the ESPN family, in front of and behind the camera, directing and producing live sporting events with the latest HD equipment.

A group of St. Bonaventure students even went to Atlanta to cover Super Bowl LIII, and others covered NCAA men’s basketball tournament games in Dayton and Dallas. 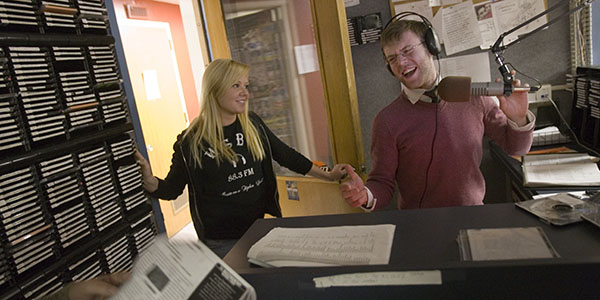 Our student-run campus radio station, 88.3 FM "The Buzz," has been ranked by The Princeton Review as one of the top 10 college radio stations in the country for more than 20 years. It held the top spot in the land several times and in 2019 was ranked No. 2.

WSBU features news, music and campus events. School of Communication students work at the station for on-campus internship hours but anyone, even first-year students, can join. The station features a professional production studio, where students create promos and news stories with state-of-the-art effects and sound. Learn more and listen at www.wsbufm.com.

This monthly music and entertainment magazine is published by students involved in campus radio station WSBU-FM — The Buzz. It features reviews of albums, concerts, movies and books.The staff welcomes students from all majors and class years. Their studio is located in the Reilly Center. Follow The Buzzworthy online. 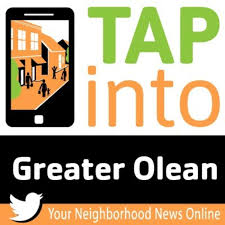 TAPinto Greater Olean is a hyper-local news outlet staffed by students in the Jandoli School's Journalists' Workshop courses. It features reporting by St. Bonaventure students on news that happens in Olean, Allegany, Hinsdale, Franklinville, Cuba and other nearby municipalities.

TAPinto is a network of 80 locally owned and operated news sites in New Jersey, New York and Florida with more than 9 million readers. TAPinto members are provided with ongoing technical support, as well as editorial and advertising tutorials and training.

St. Bonaventure was the first university to buy a TAPinto website franchise, and launched TAPinto Greater Olean in 2016. All franchisees have access to the entire TAPinto network, and SBU students have had stories posted on other TAPinto sites. 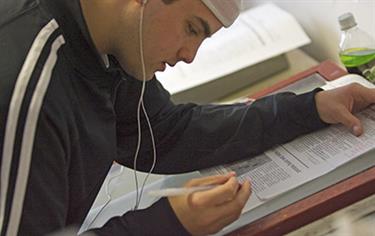 Grab a page one byline writing about an issue everybody's talking about. Cover a Division I sporting event

The Bona Venture, the university's award-winning student newspaper, has been the go-to source of information presented by talented writers, editors and photographers since 1926. It's earned rankings among the very best college newspapers in the country by The Princeton Review.

The BV publishes print and online editions, and welcomes students of all majors and class years. There are a number of available positions:
No journalism experience? That's OK. We'll teach you.

The BV is published weekly. Funded by the university, it is student-run, operating independently of any of any academic school or department. Learn more at the BV website: www.thebvnewspaper.com; visit us on Facebook and Twitter; or email us at bonavent@sbu.edu.

The Intrepid is a student-created online newspaper established in 2011 to cover Bonaventure campus news and sports. Its mission has since expanded to cover entertainment, music and fashion.

The Intrepid defines itself as a news source run by students, for students. Open to students of all majors,  The Intrepid encourages students to write about whatever interests them.

Learn more about The Intrepid.

Published twice a year, with issues in the fall and spring, The Laurel welcomes all contributors: current and former students, faculty, staff and administrators, as well as members of surrounding communities.