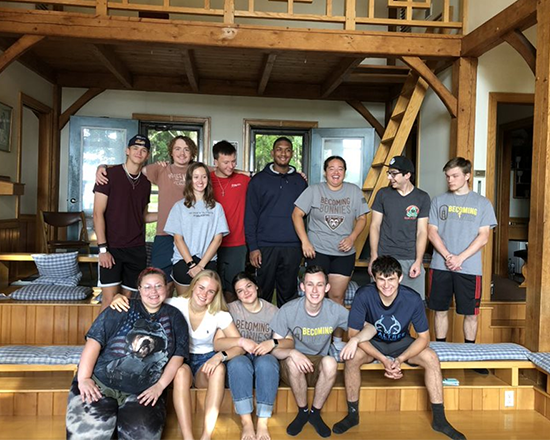 Serving meals at a soup kitchen in Philadelphia’s Kensington area or building wheelchair ramps for residents in the local community are just a couple examples of how St. Bonaventure University students break away from their familiar surroundings and help others.

Bona’s Break the Bubble program, offered through the Franciscan Center for Social Concern (FCSC), is an opportunity for students to venture beyond the borders of campus and assist disadvantaged and under-represented populations.

Valentina Cossio, a senior accounting major from Florida, journeyed as a freshman with eight other students to the St. Francis Inn in Philadelphia. The restaurant-style soup kitchen has been serving the poor and homeless since 1979.

“Helping at the inn was a highlight of my freshman year,” Cossio said.

During the seven-day service trip, Cossio formed a daily routine. She arrived in the kitchen early in the morning to help make homemade breakfast sandwiches, doughnuts, coffee and juice.

“The inn really makes sure to give people options,” Cossio said. “It is important for people to get to feel like they have at least some say in what they are eating every day.”

Guests would come in and Cossio would serve on an assembly line. People could eat inside or take their food out to a courtyard.

After breakfast, Cossio and the other volunteers would help clean and do a little organizational work in the kitchen. Then it was time to get ready for lunch where as many as 200 people might arrive for a sit-down meal in the dining room. To compare, a busy day for St. Bonaventure’s soup kitchen, the Warming House, might be closer to 70 guests.

After they finished working for the day, the group engaged in mission talks with the friars who operate the soup kitchen.

“During these talks we learned about the humanity behind a soup kitchen,” Cossio said.

Cossio took these lessons back to St. Bonaventure with her as she currently works as a coordinator at the Warming House.

Students also have the opportunity to make a difference closer to campus.

This year, the FCSC invited freshmen to campus a week early to get involved with the community before beginning their first semester.

Activities included preparing and serving meals at the Warming House, helping with maintenance at Mt. Irenaeus and building wheelchair ramps with BonaResponds in the Olean area.

“I think we did a lot for the community during that week,” Murphy said. “We helped people get into their homes easier, we helped feed people and overall we strengthened the Bonnies community in coming to campus early and creating a group of people who are willing to help others.”

“Freshman service week allowed us to not only experience the community early on, but to step into a leadership role in the FCSC,” Amendola said.

In the past, Break the Bubble has participated in a wide range of service projects, including trips to Nazareth Farm, a Catholic community in rural West Virginia that transforms lives through a service-retreat experience; Saint’s Place in Rochester, New York, which provides assistance to refugees; and the Valley of the Angels orphanage in Guatemala City, Guatemala.

To help raise money and awareness for the Break the Bubble program and other outreach ministries, the FCSC will host its annual #GivingTuesdayatBonas campaign on Nov. 29. More information on how you can support students in service to the local and global community will be available through November.