Civil War monuments, particularly Confederate monuments, have been lightning rods for controversy in recent years. A new collection of essays co-edited by Dr. Chris Mackowski, professor of journalism and mass communication at St. Bonaventure University, tackles some of the tough questions that stem from those controversies. 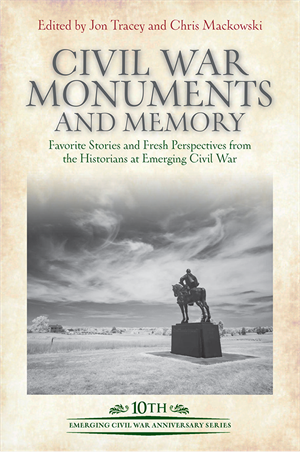 “Civil War Monuments and Memory: Favorite Stories and Fresh Perspectives from the Historians at Emerging Civil War,” is co-edited with historian Jonathan Tracey and published by Savas Beatie. It is the fourth hardcover in the Emerging Civil War Tenth Anniversary Series, featuring nearly 35 essays by 28 historians.

The book begins with a basic primer that defines monuments, memorials, and other sorts of markers, Mackowski said.

“Their placement also makes a difference. In a public square versus on a battlefield versus in a cemetery — those contexts make a difference,” Mackowski explains. “Whether a monument is publicly or privately funded makes a difference, too. Our essays try to explore many of these specific issues that have put monuments into the news today. Our book doesn’t have all the answers, but we do hope we offer a lot of food for thought.”

Mackowski said monuments have become the subject of controversy lately because there’s more to them than meets the eye.

“Monuments can be useful learning tools in some situations,” he says, “but they can also have multiple layers of meaning that can be celebratory to one group of people and quite hurtful to another group, all at the same time. And those groups might not understand each other’s perspectives.”

Any monument captures a particular version of history because of the story it tries to tell and commemorate.

“This is what we call ‘historical memory,’ which is different than ‘history,’” said Mackowski. “People like to remember history in specific ways. For instance, we might see statues of Abraham Lincoln that show him being inspirational or noble or even humanized. He was all those things, but he could also look awkward on a horse and he suffered from bouts of depression — yet we don’t see statues that depict those sides of him. Every statue or monument represents a deliberate choice to show things a certain way.”

The book includes a number of essays that show how historical memory works.

“We take a few familiar stories from the Civil War and show how they’ve been misremembered and twisted a bit over time and what the implications of that are,” he said.

Mackowski’s co-editor, Jon Tracey, works as a historian in Virginia’s Shenandoah Valley. He also chairs the editorial board for Emerging Civil War (ECW), an organization of more than 30 historians dedicated to sharing the story of the American Civil War. Mackowski serves as ECW’s editor in chief.

Mackowski is the author, co-author, or editor of more than 25 books on the Civil War. He teaches writing in St. Bonaventure’s Jandoli School of Communication, where he also serves as associate dean for undergraduate programs. He has taught at St. Bonaventure since the fall of 2000.