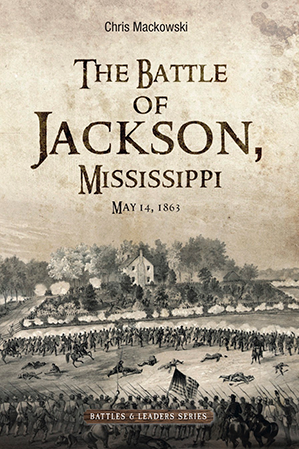 Chris Mackowski, Ph.D., professor of journalism and mass communication at St. Bonaventure University, has published a new book, “The Battle of Jackson, Mississippi, May 14, 1863,” that now serves as the most comprehensive account ever written of the fight for the state capital.

“After months of futile attempts at capturing Vicksburg, Grant crossed the Mississippi River on April 29 and struck into the interior of the state,” Mackowski said. “He fought battles on May 2, 12, 14, 16, 17, 19, and 22, and then besieged Vicksburg until its surrender on July 4 – that’s a lot of action! In the midst of those 67 days, the battle of Jackson on May 14 has usually been glossed over.”

Other aspects of the campaign have received ample attention from historians, but Jackson has remained largely unexplored.

“Grant didn’t plan to fight the battle. It was a spur-of-the-moment decision,” Mackowski said. “The battle is usually treated as a setup for a battle two days later at a place called Champion Hill, which proved to be the decisive fight of the campaign. However, I wanted to look at the battle of Jackson on its own merits because it had important consequences.”

Another reason the battle gets forgotten is because the battlefield has disappeared. “It doesn’t help that pretty much the entire battlefield has been swallowed by the city as it has grown over the years, so there aren’t physical reminders of the battle,” he says.

“The Battle of Jackson, Mississippi, May 14, 1863,” is the second book from publisher Savas Beatie LLC in its new Battles and Leaders Series.

“We created the series to help provide a place where writers can focus on battles, characters or events that are not traditionally big sellers like Gettysburg, Vicksburg or Antietam,” said publisher Theodore P. Savas.

Terry Winschel, former chief historian at Vicksburg National Military Park, wrote the foreword for the book. Winschel said it “fills a significant void in the literature on the campaign.

“Mackowski ... focuses his talented pen and marvelous storytelling ability to detail the battle for control of Mississippi’s capital city,” he added.

Mackowski says writing about a battle in Mississippi was “a new adventure.” His usual rule is to write only about stories that relate to the battlefields where he lives in Central Virginia: Fredericksburg, Chancellorsville, Mine Run, the Wilderness, and Spotsylvania Court House.

“I’m a firm believer that you can’t really write about a battle unless you really know the battlefield,” he said.

But in May 2018, for the 155th anniversary of Grant’s Vicksburg campaign, Mackowski was invited by the American Battlefield Trust to co-host a video series about the campaign in Mississippi.

“We had a stellar lineup of guest stars on that trip, so I had to do a lot of in-depth study to get myself up to speed,” Mackowski said. “I took a particular interest in the battle of Jackson because my oldest son happens to be named Jackson – so that became my connection!”

To situate events from the battle on the city’s modern landscape, Mackowski collaborated with historian Jim Woodrick, formerly with the Mississippi Department of Archives and History and a resident of the Jackson area. For the book’s final chapter, Mackowski took a trip to Jackson so Woodrick could show him around, and the chapter recounts the trip.

“I can’t really call it a tour because there’s not much to see,” Mackowski admits. “But at least people can connect the story with the geography in some way.”

Only one other book on the battle has been published, a slim volume from 1981, but otherwise, the battle usually receives a few pages at most in larger studies of the Vicksburg campaign.

“I had access to a lot of sources previous historians did not, so I was able to pull together what stands as the most exhaustive account of events in Jackson,” Mackowski said. “I admit, the bar was kind of low,” he laughs, “but hopefully I’ve raised that. I really wanted to give this battle its due.”

Mackowski, who also serves as the associate dean for undergraduate programs in the Jandoli School of Communication, has taught at St. Bonaventure since the fall of 2000. “The Battle of Jackson, Mississippi,” is the 26th book he has authored, co-authored, or co-edited.