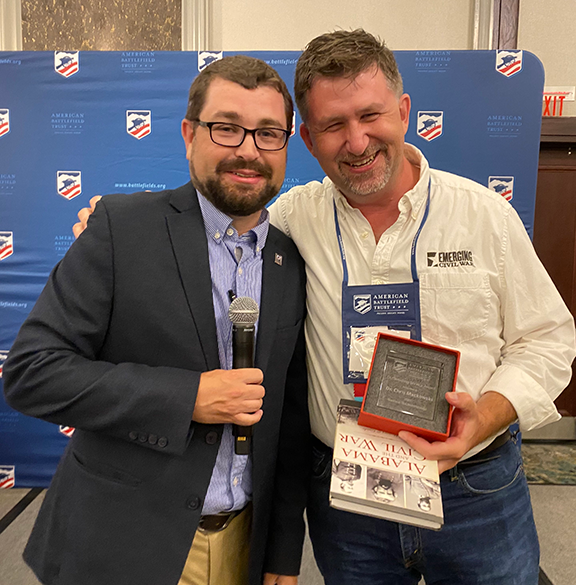 The American Battlefield Trust is the largest nonprofit organization devoted to the preservation of America’s hallowed battlegrounds. Although primarily focused on the protection of Civil War battlefields, the trust works to save the battlefields connected to the Revolutionary War and War of 1812, as well. Through educational programs and heritage tourism initiatives, the trust also informs the public about the vital role battlefields played in determining the course of our nation’s history.

The trust recognized Mackowski with an Award for Outstanding Service at its Teacher Institute held July 21-24, 2022, in Mobile, Alabama.

“Chris has been a great partner for us for years,” said the trust’s Deputy Director of Education Kristopher D. White, a long-time collaborator with Mackowski, in presenting the award. “He goes above and beyond, and we appreciate everything he brings to the table for us — from his teacher workshops to his tours to his appearances in on our videos. If you’ve ever watched him, his passion shows through. You know he loves what he does, and we love what he does for us.”

“The trust is lucky to work with a tremendous number of talented historians,” Duncan said. “Some we consider family, Chris Mackowski among them. He embodies our mission and priorities in all that he does, and our work is richer and more vibrant for his contributions.”

Mackowski has worked closely with the trust for a number of years, especially with its Education Department, hosting video content on the trust’s YouTube and Facebook pages, conducting tours, and writing articles for the organization’s print and online publications. He has also been involved with a number of preservation initiatives for endangered Civil War battlefields.

“This award was an incredible and unexpected honor for me,” Mackowski said. “The trust has given me some amazing opportunities over the years, and I am deeply grateful to everyone there for those opportunities. It’s my privilege to serve a cause and an organization I’m so passionate about.”

The Teachers Institute, which celebrated its 20th year this year, annually attracts hundreds of K-12 teachers from all over the country. While in attendance, teachers share in three and a half days of workshops, battlefield and museum tours, and guest lectures designed to give educators the tools to more creatively and engagingly teach about the pivotal conflicts of America’s first century.

In addition, during the two years COVID necessitated a suspension of the in-person Teacher Institute, the trust spearheaded the creation of a Virtual Teacher Institute (VTI), which has serviced more than a thousand teachers since its inception.

At this year’s in-person Teacher Institute, Mackowski offered presentations titled “Abraham Lincoln as a Writer” and “What’s in a Name: Names as Frames for Understanding Historical Events.” During this year’s Virtual Teacher Institute, he presented a workshop on the intersection between technology, ethics, and journalism as the first draft of history. Past workshops he has presented have looked at teaching Civil War controversy in the classroom and the Civil War in pop culture. Mackowski has also moderated a number of sessions for the VTI each year it’s been held.

Mackowski has taught at St. Bonaventure as a writing professor in the Jandoli School of Communication since the fall of 2000. He is also the editor-in-chief and co-founder of Emerging Civil War and the series editor of the award-winning Emerging Civil War Series, published by Savas Beatie. He has authored, co-authored, or edited nearly two dozen books on the Civil War, and his articles have appeared in all the major Civil War magazines. Mackowski serves as vice president on the board of directors for the Central Virginia Battlefields Trust, a regional battlefield preservation organization based in Fredericksburg, Virginia, and he serves on the advisory board of the Civil War Roundtable Congress and the Brunswick (NC) Civil War Roundtable — the largest in the country. His is also historian-in-residence at Stevenson Ridge, a historic property on the Spotsylvania battlefield in central Virginia.