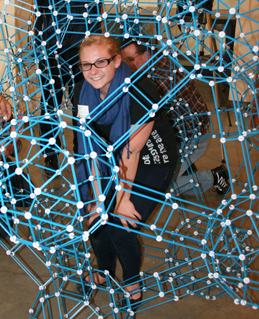 Wondering what exactly is happening in the curious photo to the left? It all began with St. Bonaventure's first Zometool Workshop, organized by Dr. Chris Hill, Assistant Professor of Mathematics, and Evelyn Sabina, then Curator of Education at The Regina A. Quick Center for the Arts.

The purpose of the two-hour workshop, held November 9, 2011, was to allow high school students to explore geometry using a construction kit called Zometool. The workshop culminated with a "geometric barn-raising": students and teachers worked together to build a large impressive structure called a meta-icosahedron.

Sabina also provided the perfect venue: a large student-oriented space on the third floor of The Quick Center called The Loft. Read further for the story of the workshop (and of the photo).

To familiarize the participants with Zometool, they were given challenge sheets with projects such as the-cube-in-the-dodecahedron, the elevated icosahedron, and the rhombic triacontahedron. However, participants were free to modify the projects or work on their own projects. 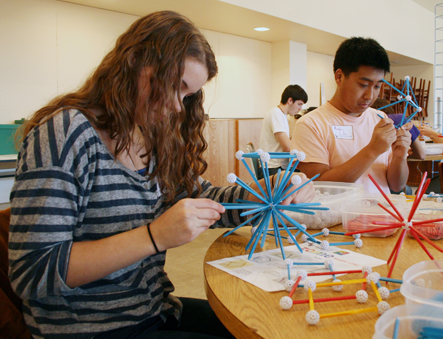 Nicole discovered the "scaffolding" method for building certain polyhedra. She put medium blue struts in all rectangular holes in a connector ball to create a blue "pin cushion". By putting connector balls on the ends of the blue struts and then connecting those balls with more blue struts, Nicole created a truncated icosahedron.

Andy built a regular icosahedron, on the way to an "elevated" icosahedron, which is a kind of three-dimensional star. The completed model appears in some of the photos below. 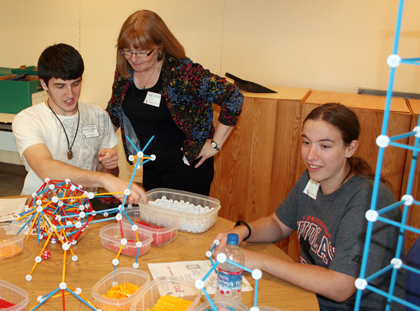 In the photo to the right, Brandon discusses one of his projects with Evelyn Sabina. Prior to the Round I challenges, Brandon built a model that, remarkably, included two of the challenges: a regular dodecahedron and a rhombic triacontahedron.

To the right, Colleen constructs a regular dodecahedron on the way to the cube-in-the-dodecahedron. An avid equestrienne, Colleen also built a horse, which stands alertly in the middle of the table. 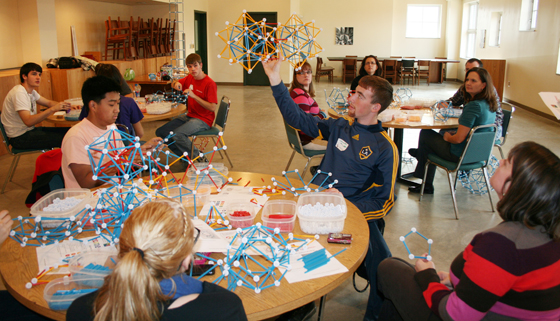 The first round of challenges culminated with a discussion in which each participant presented their project to the group. 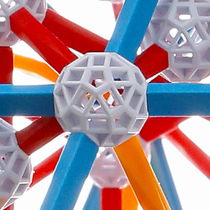 A Zometool connector ball, also called a node, has the shape of a polyhedron called an extended rhombicosidodecahedron (see the close-up to the left). This polyhedron can be built with Zometool.

In preparation for the barn-raising, each participant was challenged to build a "meta-node": a beachball-sized model of the Zometool node.

The participants built twelve giant versions of the Zometool node. 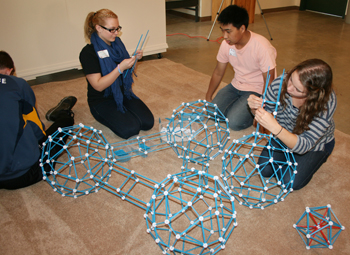 With the meta-nodes complete, their purpose was revealed: students were to connect them with "meta-struts" to build a huge meta-icosahedron. The completed structure would have the shape of a regular icosahedron, which is a three-dimensional figure with 12 nodes, 30 edges, and 20 faces, where each face is an equilateral triangle.

At left: the triangular base has been built. Just 19 more triangular faces to go! Notice the small icosahedron at the lower right corner of the photo. The students used the small model to guide the construction of its much larger cousin. As meta-nodes were attached to the base with meta-struts, the structure began to take shape. 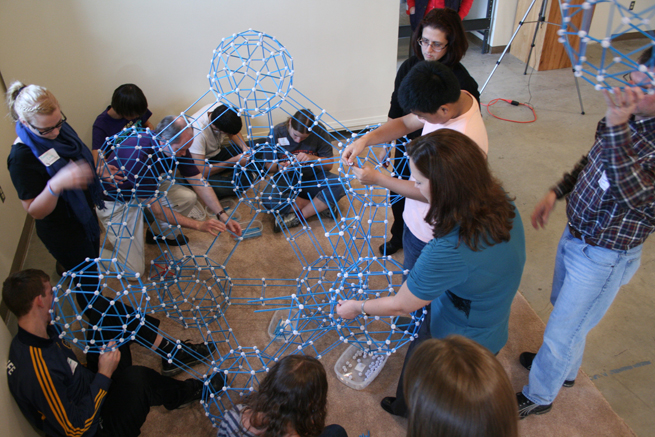 It takes a lot of people to raise a barn! 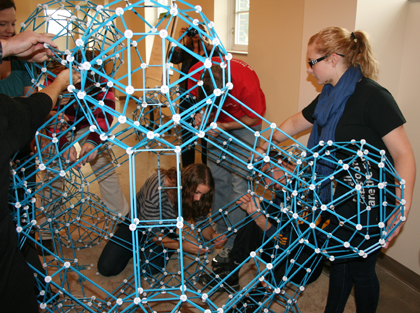 As the meta-icosahedron neared completion, it became free-standing. Until then, the "sides" had to be held to prevent the structure from collapsing while more meta-nodes and meta-struts were added.

Meanwhile, near the bottom of the structure...

...the stresses caused by the vigorous activity above repeatedly disconnected some of the struts.

But soon the structure was complete and all broken connections repaired. 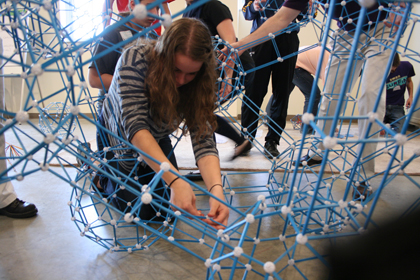 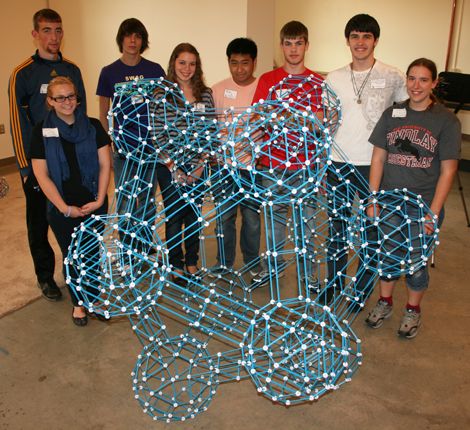 Congratulations—it's a meta-icosahedron!
From left: Becca (front), Matt, Chris, Nicole, Andy, Pete, Brandon, and Colleen.
The towering structure contained over 2500 parts and was large enough that... 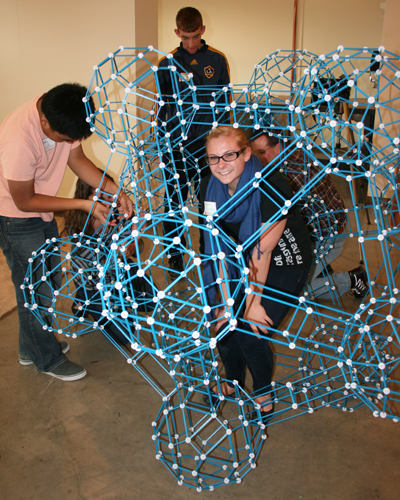 ...Becca was able to gingerly enter and stand up inside of it.