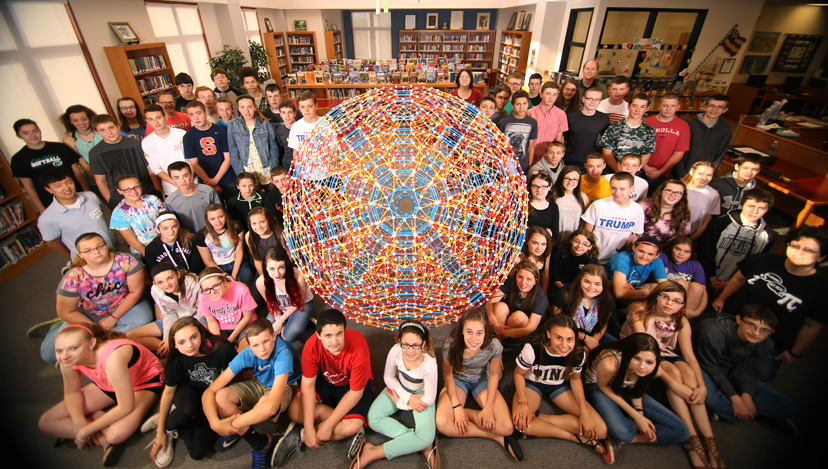 On May 20 and 24, 2016, Linda Dodd-Nagel’s awesome 8th-grade math students at Allegany-Limestone Central School built a remarkable geometric structure using a construction system called Zometool. The structure, standing six and a half feet tall and containing 12,540 pieces, represents a three-dimensional “shadow" of a four-dimensional figure called a runcitruncated hypericosahedron. The construction was directed by Dr. Chris Hill.

The project was made possible by a generous donation by SBU alum Robert Crowley, Class of '71.

Each module was a polyhedron called a rhombicosidodecahedron. The modules came in five varieties, according to how "squashed" they were by the projection from four to three dimensions. The first variety was not squashed at all, the second was slightly squashed, the third was more squashed, the fourth was even more squashed, and the fifth was completely flat. 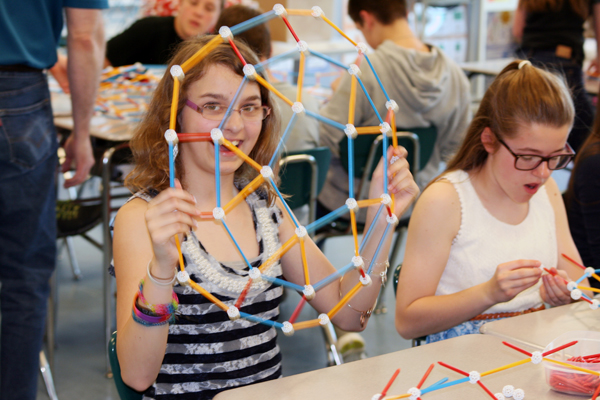 A good strategy for building a module is to build the top and bottom halves,
which are identical, and then... 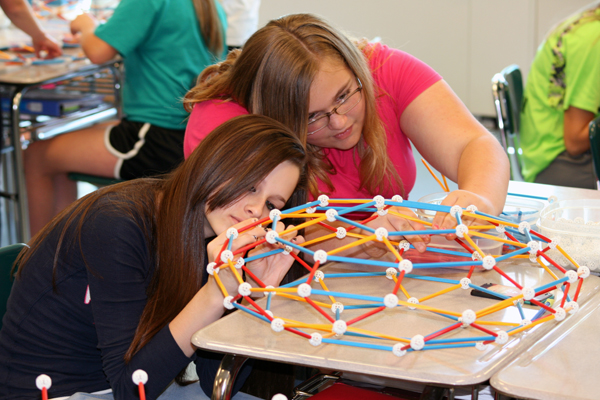 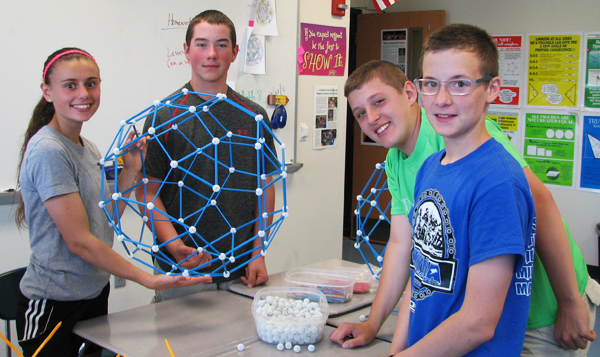 Exactly one of the 75 rhombicosidodecahedra is not compressed by the
projection from four to three dimensions. It forms the center of the final structure. 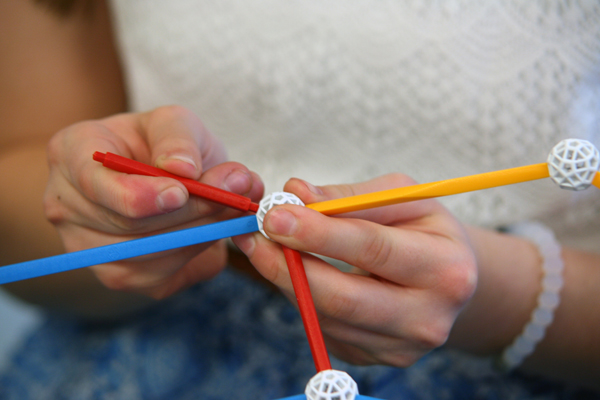 By a wonderful coincidence, the shape of the white Zometool nodes is
the same kind of polyhedron as the modules the students were building:
a rhombicosidodecahedron. 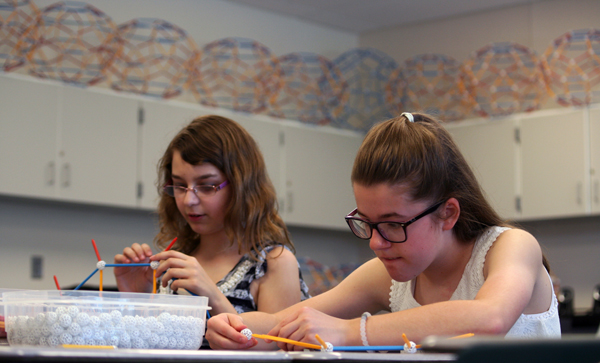 Four of Mrs. Dodd-Nagel's classes contributed to the construction. Later
classes were surrounded by the fruits of the labors of the earlier classes. 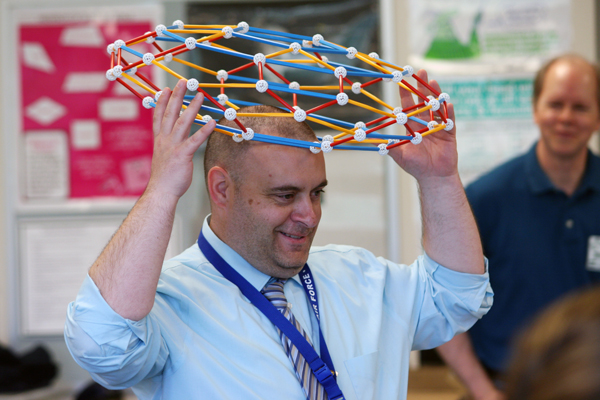 Principal Pecorella has a head for geometry.

On May 24, about ten of Mrs. Dodd-Nagel's students assembled the 75 modules in the library to complete the project. 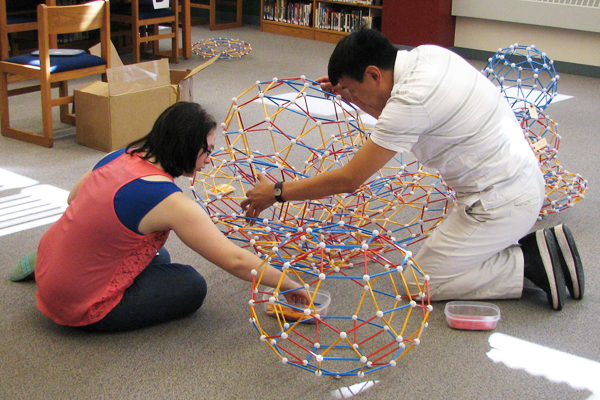 The bottom was assembled first, so that a base could be added to strengthen the structure. Tae Cooke (from the SBU Department of Physics) designed the base. Mr. Cooke and Cassandra built the base using white struts so that the base could be distinguished from the structure itself. Without a base to buttress it, the completed structure would collapse under its own weight. 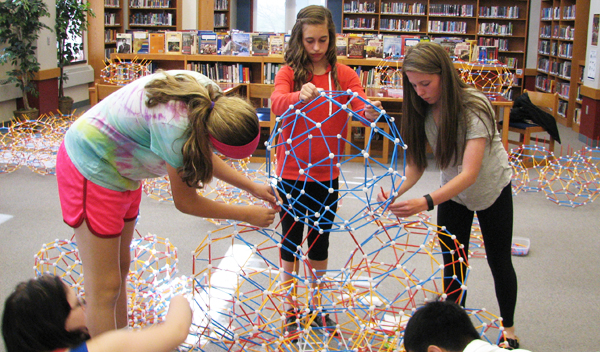 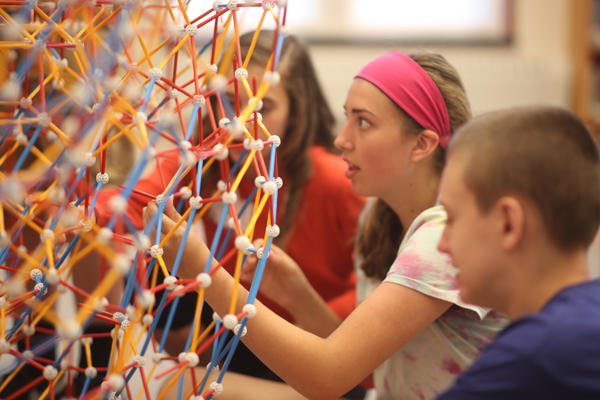 As the structure grew, many people could work on it at the same time. 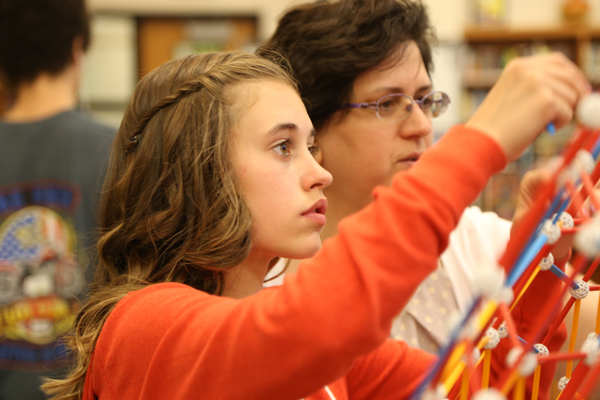 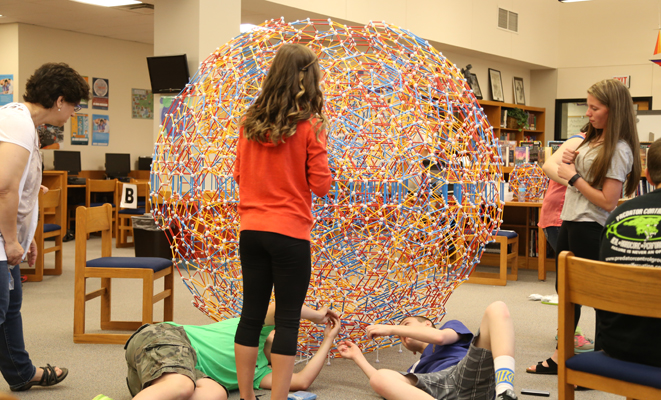 When it neared completion, the structure was taller than everyone working on it. 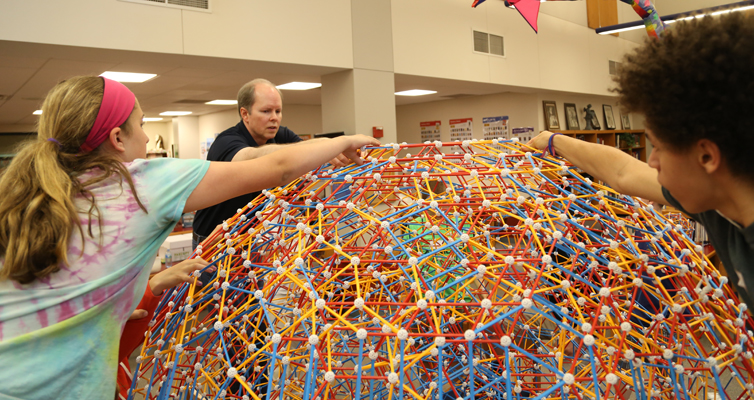 Standing on chairs, Taylor, Dr. Hill, and Brandon work together to complete the top. 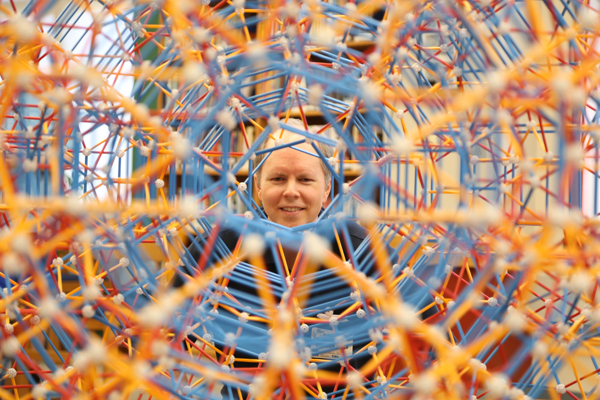 Greetings from across the fourth dimension! The Zometool model of a runcitruncated hypericosahedron has numerous tunnels, including six pentagonal tunnels such as this this one. The group photo at the top of this page was taken by aiming a camera equipped with an ultra-wide-angle lens down one of the pentagonal tunnels.

Mrs. Dodd-Nagel displayed the structure at the ALCS Arts Festival. Subsequently, the Olean Mall kindly permitted us to display it at the mall's center court for a few weeks to allow the public to enjoy the students' incredible accomplishment.