The world premier of a stage-6 Sierpinski tetrahedron made from Zometool at the Quick Center for the Arts on May 7, 2015. From left to right: the Allegany-Limestone group, the Hinsdale group, the Olean group, & the Portville group.

The towering structure in the above photo is the result of a remarkable collaboration between the Allegany-Limestone, Hinsdale, Olean, and Portville school districts called The Connect 4 Project. The 13-foot tall, 32,770-piece structure was built by 87 middle school students using a construction system called Zometool. Mathematically, the structure represents a beautiful geometric figure called a stage-6 Sierpinski tetrahedron (or stage-6 tetrix). The Connect 4 Project was organized by Dr. Chris Hill. The project was generously supported by Cattaraugus-Allegany BOCES.


How was the structure made?

In each of the four districts, a group of students was guided by their teachers to build a stage-5 Sierpinski tetrahedron, which stands over six feet tall and contains 8,194 Zometool pieces. Each teacher or group of teachers devised a schedule for building their stage-5 structure that worked best for their students, with some groups completing their portion in the fall of 2014 and others completing theirs in the spring of 2015. Linda Dodd-Nagel worked with 19 eighth-graders at Allegany-Limestone Central School; Holly Edwards and Matthew Taub worked with 36 fifth-graders at Hinsdale Central School; Jake Palo, Christine Armstrong-Gabler, Maureen Ullman, and Katie Ralston worked with 18 students at Olean Intermediate Middle School; and Bill Torrey and Matt Burlingame worked with 14 seventh- and eighth-graders at Portville Central School. 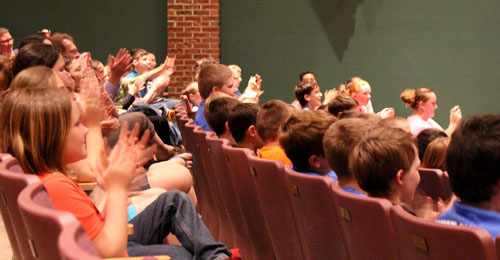 Many of the students, teachers, and administrators involved in the project were present at the grand finale, which was held on May 7, 2015 in the Quick Center for the Arts' Rigas Family Theater. At the finale, the four stage-5 structures were connected to make a stage-6 Sierpinski tetrahedron. With the theme music to "2001: A Space Odyssey" playing over the stage, a group of teachers gently placed one stage-5 on top of the other three to complete the final structure. And... the structure held! The following video captures the completion of the Connect 4 Project.


Is this some kind of record?

We believe so! In a congratulatory letter to the students and teachers, the Chief Visionary Officer of Zometool, Paul Hildebrandt, stated that, to his knowledge, this was the first time a stage-6 Sierpinski tetrahedron had ever been built using Zometool. Zometool President Carlos Neumann featured the project on the company’s main website and facebook page.

This endeavor, which spanned two years from conception to completion, was called The Connect 4 Project for two reasons. First, the four school districts involved are those in the Connect 4 Program, which facilitates the sharing of resources among the four districts. Second, the four stage-5 structures were literally connected to form the stage-6 structure.


Here are the students! 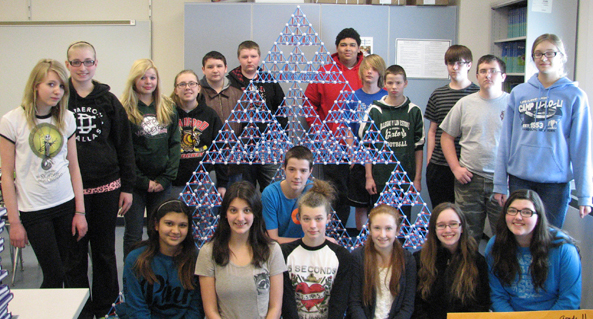 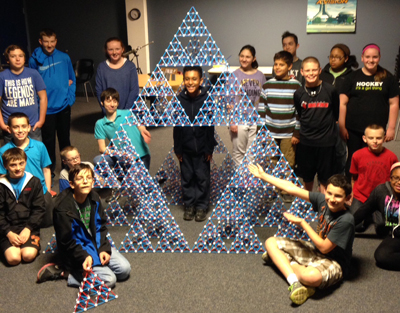 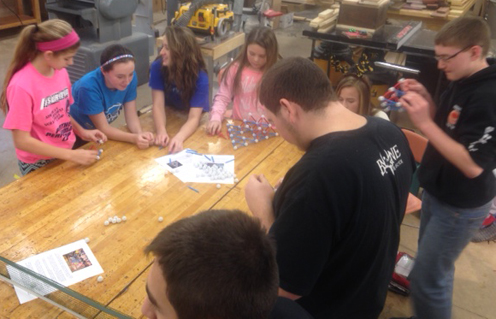 The Portville group, guided by Bill Torrey and Matt Burlingame.

More photos from the finale 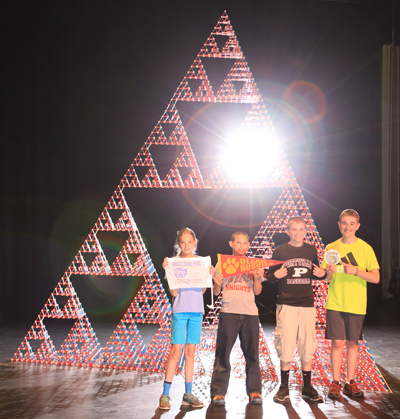 One student from each school was selected to represent their group in a
special photographic memento of the occasion, as seen above and in the
close-up below. Go Bobcats, Huskies, Panthers, and Gators! 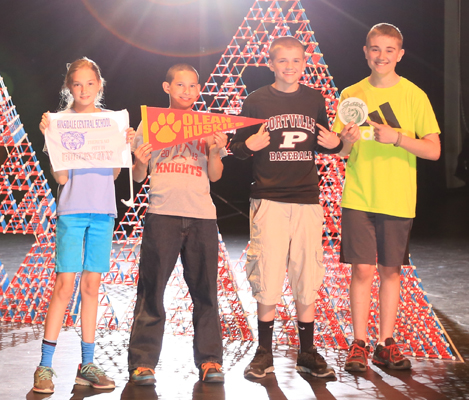 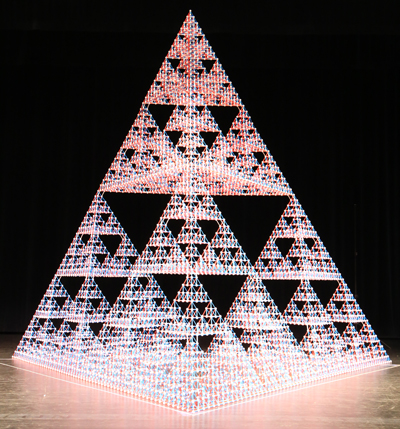 With powerful theater spotlights illuminating the structure from
above, the Sierpinski tetrahedron practically glows. 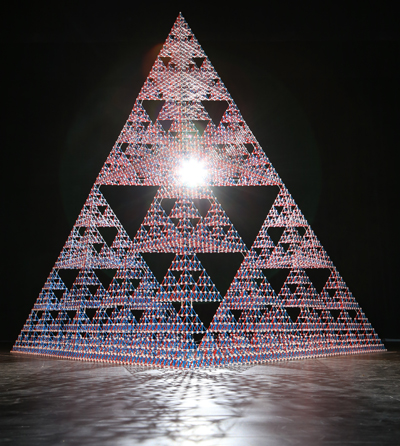 In the image above, the theater lights were off and a flash, placed
behind the structure, was triggered at the instant the photo was
taken. Check out the cool shadow on the floor. 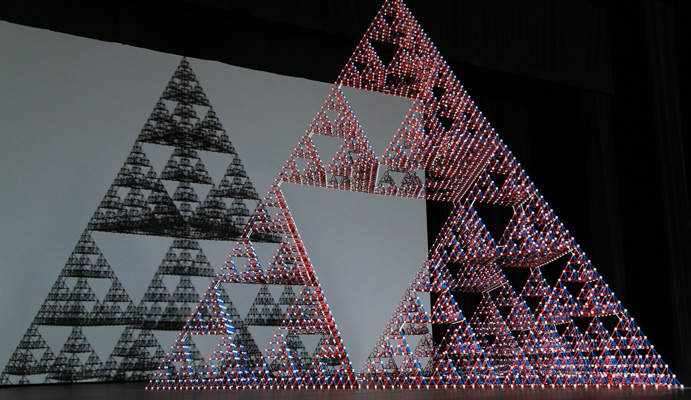 With the flash in front of the structure and a white screen behind,
we got another awesome shadow. 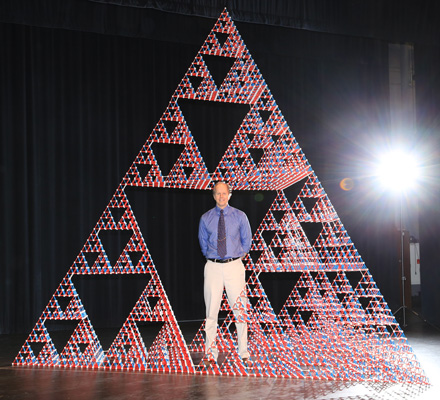 Dr. Chris Hill hangs out within a stage-6 Sierpinski tetrahedron.
The weather inside is really nice.

What is a stage-6 Sierpinski tetrahedron & what is Zometool? 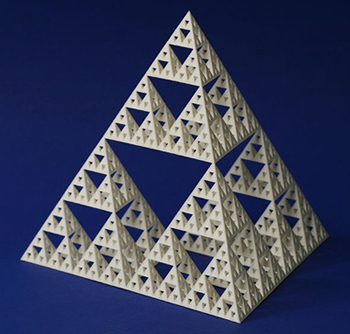 Zometool is a mathematically-precise plastic construction system for building geometric structures, from simple polygons to “shadows” of four-dimensional figures, from models of DNA molecules to works of art.


Technical details, including the parts count 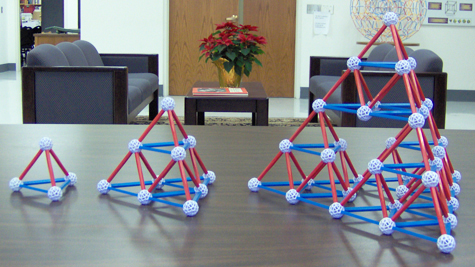 The Connect 4 Project was generously supported by Cattaraugus-Allegany BOCES.

Clara Wilder of the Olean School District's Central Receiving transported the structure for every leg of its tour, which made the tour possible.