Sep 13, 2021, 10:43 AM by Beth Eberth
The Franciscan Institute at St. Bonaventure University has announced the appointment of Dr. Aaron Gies as associate editor of its academic journal, Franciscan Studies.

The Franciscan Institute at St. Bonaventure University has announced the appointment of Dr. Aaron Gies as associate editor of its academic journal, Franciscan Studies. 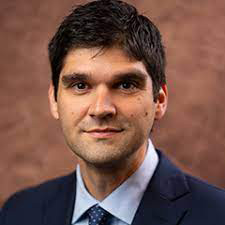 Dr. Gies, assistant professor of theology and Franciscan studies at St. Bonaventure, received his doctorate in historical and systematic theology from The Catholic University of America in 2018.

In announcing the awarding of this prestigious associate editorial appointment, Fr. David B. Couturier, O.F.M. Cap., executive director of the Franciscan Institute, reflected on Dr. Gies’ scholarship and enthusiasm for promoting Franciscan research.

“For the past two years, Dr. Gies has served as a research fellow in the Franciscan Institute. His exceptional skills as a researcher and his talent for proofreading and assessing medieval texts for other journals made him a natural choice,” said Fr. David. “We are honored to have this young and talented scholar on our editorial team.”

Gies is grateful for the opportunity to work for the Franciscan Institute.

“Franciscan Studies is such an important journal in the English-speaking world, not just for those of us who study Francis and early Franciscans but more broadly in the fields of medieval and modern history, theology, philosophy, spirituality, literature, etc. I am honored to have the opportunity to serve this community of scholars,” he said.

“Dr. Gies’ disciplinary expertise and links with national and international scholars alike assures that Franciscan Studies will remain a preeminent academic journal for those interested in the wide ranging worldview of those inspired by Francis of Assisi down through the centuries,” he said.

Gies will be working with Dr. Jean-François Godet-Calogeras, general and managing editor of Franciscan Studies.

“Dr. Gies is part of a young generation of talented scholars that will continue to carry on valuable and diversified Franciscan research,” said Godet-Calogeras.

About the University: The nation’s first Franciscan university, St. Bonaventure University is a community committed to transforming the lives of our students inside and outside the classroom, inspiring in them a lifelong commitment to service and citizenship. In 2019, St. Bonaventure was named the #1 regional university value in New York and #2 in the North by U.S. News and World Report.