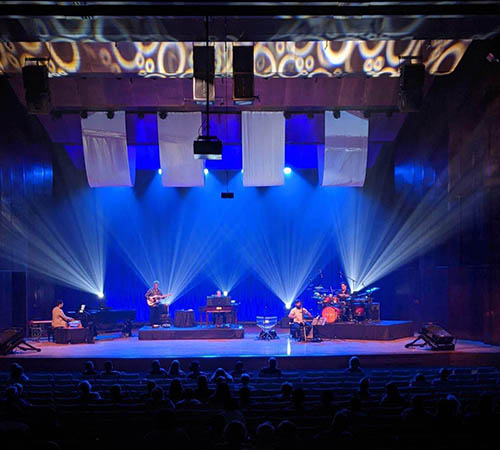 Cordis Ensemble will present its innovative multimedia program “Condition Blue – The Acoustics of Aquatics” at 7:30 p.m. Friday, Nov. 4, at St. Bonaventure University’s Regina A. Quick Center for the Arts.
This is the third presentation in the 2022-2023 Friends of Good Music performance season hosted by the Quick Center.
The program features the dramatic live music of Cordis, creatively affected and enhanced by the boundless properties of water. The music comes to life amidst breathtaking aquatic imagery curated by the National Geographic Society.
“Condition Blue” is part of a multifaceted project the ensemble has embarked on in an effort to raise awareness of Earth and its precious resources.
Cordis is an American progressive chamber music group featuring cimbalom, percussion, cello, guitar, and keyboards. Formed in Boston, Massachusetts, in 2010 by Richard Grimes, Andrew Beall, and Jeremy Harman, the group initially served as a performance vehicle for Grimes’ compositions. The ensemble’s first album, “Here On Out,” was hailed as a critical success.
The group refined its focus, exploring more experimental timbres, with Grimes directing his role in the ensemble solely on the electric cimbalom.
Cordis’s second album, “Seams,” released in September 2016, featured pieces ranging in duration from under 30 seconds to more than 10 minutes. Grimes described his writing on the album as “a contest of patience versus efficiency.”

In fall 2020, Cordis premiered “Condition Blue,” the first in a three-part series of performance themes incorporating elemental environments (water, fire and earth) with sound. “Condition Blue: The Acoustics of Aquatics” offers an evocative journey into Earth’s diverse water habitats, where life thrives in the most extraordinary conditions. The show features Cordis performing on traditional and nontraditional water-based instrumentation.

“I’m so glad we were able to book this innovative ensemble while they’re on their national tour,” said Ludwig Brunner, executive director of the Quick Center. “This is our first multimedia show in our performance series and it promises to be an exciting event for all friends of music and of the environment.”

Single ticket prices for this performance are $20 at full price, $16 for senior citizens and St. Bonaventure employees, and $5 for students. For tickets and information, call The Quick Center at (716) 375-2494.

For each Friends of Good Music performance, The Quick Center will open its galleries one hour before the performance and keep them open throughout the intermission. Regular gallery hours are noon to 5 p.m. Monday through Friday, and noon to 4 p.m. Saturday and Sunday.

Museum admission is free and open to the public year-round. For more information, visit www.sbu.edu/quickcenter.

______________
About the University: The nation’s first Franciscan university, St. Bonaventure University is a community committed to transforming the lives of our students inside and outside the classroom, inspiring in them a lifelong commitment to service and citizenship. St. Bonaventure was named the #5 regional university value in the North in U.S. News and World Report’s 2022 college rankings edition.
Share on Facebook
Share on Twitter
Share by E-Mail
All Rights Reserved © 2023