Whether you're drawn to works by European and American masters or contemporary artists, Quick Center galleries offer something to please every art lover.

Among works exhibited in Quick Center galleries are (from left) “Goethe, 1982” by Andy Warhol, “The Sunflower’s Quilting Bee at Arles” by Faith Ringgold, and “Picnic on a Ledge” by Michael Lenson. 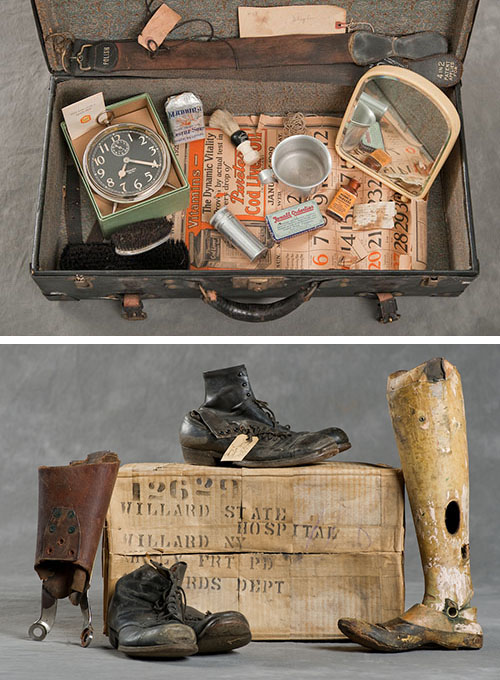 This exhibition came about after the closing of the Willard Psychiatric Hospital in the Finger Lakes region of New York state in 1995. At that time, employees tasked with cleaning out the building found hundreds of suitcases in an attic of an abandoned building. Many of them appeared untouched since their owners, patients at Willard, brought them to the institution several decades earlier.

Organized by photographer Jon Crispin, the exhibition contains 30 framed photographs and text panels. Karen L. Miller, M.D., a psychiatrist, conducted research at the New York State Archives in connection with this project and has written text panels about 10 of the patients whose suitcases have survived.

In conjunction with the exhibition, the Quick Center hosted a panel discussion about the advancement of mental health services from institutions (like Willard) to more person-centered, community-based services. The program, “Unpacking the Willard Suitcases: From Institution to Community,” was held Oct. 13 in the Quick Center’s Rigas Family Theater. A reception followed.

The exhibition and panel discussion are made possible by a $4,360 Humanities New York Vision Grant.

Exhibition Extended: This exhibition has been extended to run through Dec. 4, 2022.

Imagery and Icons: The Herrlein Series of Franciscan Saints and Icons by Br. Robert Lentz, OFM

This exhibition features paintings of the 13 Franciscan saints by Johann Andreas Herrlein (German, 1723-1796). It is on loan from the Franciscan friars of the Holy Name Province.

These 250-year-old paintings are contrasted by the icons of Br. Robert Lentz, O.F.M. Br. Robert is creating modern day icons while stationed at St. Bonaventure. Besides painting many hours each day, he teaches apprentices, writes, and conducts workshops on art and spirituality throughout the United States. Br. Robert is active in promoting dialog between Muslims and Christians and also is committed to the indigenization of Byzantine iconography in the various cultures embraced by the Church.

Lentz’s icons reflect his experiences among the poor in this country and in the Third World, as well as his Franciscan and Russian roots. They are filled with bright colors and often depict contemporary subjects. While always striving to remain true to the essence of Byzantine iconography, he adapts traditional conventions in order to minister better to the emerging church. His icons remain transcendent expressions of the ancient Christian tradition, and they invite us into communion with God and the saints.

Both talks will be held in the Kenney Gallery.

Women Artists: Part One: The Poetics of Reverie

This exhibition is guest curated by St. Bonaventure alumnus Gary Keem, Class of 1969. This exhibition features nonrepresentational art by women artists over the last 30 years. Nationally recognized artists such as Pat Steir and Kathy Muhlemann and regional artists like Jane Foley Ferraro are featured.

Exhibition dates: Sept. 1 through Dec. 15
(Part Two of this exhibition will be hung in spring 2023)

This gallery gallery features works by European and American masters from the University Art Collection. Works by Dürer, Victors, School of Rembrant, Rothermel, Robinson and Homer grace the walls of this gallery.

New to this gallery is a 20 foot Chinese scroll, a replica of an ancient work, as well as contemporary works by Chinese and Japanese artists..

This gallery is hung with contemporary works from the university art collection, most of which have been gifted to the university in the last 25 years and represent many artists who have had exhibitions at the Quick Center and have gifted the collection a work.