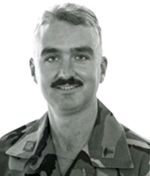 The late Maj. Michael A. Giovino was born in Belleville, N.J. After graduating from Williamsville North High School in 1975, he enrolled at St. Bonaventure, where he was an Army ROTC cadet and member of the men’s swim team.

He graduated with a bachelor’s degree in business administration in 1979, and was commissioned as a Medical Service Corps second lieutenant.

After graduating from the Army Medical Department Officer Basic Course, his first assignment was as a medical platoon leader in the 3rd Battalion, 47th Infantry at Fort Lewis, Wash. Maj. Giovino was selected for service as an Army aviator and graduated from the U.S. Army Rotary Wing Aviator Course in 1982. He reported to Gablingen, Germany, where he was a section leader in the 236th Medical Detachment (Air Ambulance).

In 1986, he graduated from the Aviation Officer Advanced Course, the Army Aviation Safety Course and the Rotary Wing Aviator Refresher Course before being assigned as detachment commander and flight operations officer, 229th Medical Detachment (Air Ambulance) at Ft. Drum, N.Y.

He subsequently served as company commander of the U.S. Army Medical Department at Fort Drum before attending the Combined Arms Services Staff School in 1988.

He returned to Fort Rucker, Ala, and became the chief and then commander of the Air Ambulance Division, U.S. Army Aeromedical Center. In 1992, he graduated from the Fixed Wing Multi-Engine Qualification Course and was selected as special assistant to the commander, F Company of 1st Battalion, 145th Aviation Regiment, before assuming command of the International Medical Student Company.

His final military assignment was as chief of the Clinical Support Division at Eisenhower Army Medical Center, Fort Gordon, Ga., where he helped to reorganize the hospital and prepare it for implementation of Tricare, the Department of Defense’s managed health care system. He was medically retired from active service on Nov. 2, 1996, and passed away on Jan. 3, 1997.

Maj. Giovino’s wife, the former Sue Ann Herger, who also graduated in 1979 from St. Bonaventure, accepted the award on his behalf. The couple have four children Jacqueline, Nicholas, Michael T., and Samuel.

On Sept. 9 1997, the Dwight D. Eisenhower Army Medical Center at Fort Gordon dedicated its helipad to Maj. Giovino as “a tribute to a soldier who contributed so much to the Army medical department both as an aviator and as an administrator.” 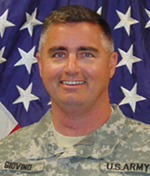 In January of 1990, Col. Giovino assumed command of the 513th Transportation Company, deploying the unit to Saudi Arabia and Kuwait in support of Operations Desert Shield/Desert Storm. Upon return from the war, he was selected to serve in the U.S. Army’s Training with Industry Program in January 1992 and worked with Trans World Airlines as the deputy director for commuter operations.

In 2001, Col. Giovino was selected for assignment with the U.S. Army Training and Doctrine Command. As a training and evaluations officer, Col. Giovino assisted USAR units with Command and General Staff College education training throughout the North Eastern United States.

In 2002, Col. Giovino assumed command of the 832nd Transportation Battalion in San Juan, Puerto Rico. While in command he was responsible for all Department of Defense surface transportation throughout the Caribbean and South America.

During this tour, he was also selected to command all military operations at the Port of Jacksonville, Fla. Col. Giovino was responsible for all military forces moving through the southeast of the United States in support of Operations Iraqi Freedom and Enduring Freedom.

Following this command, he was assigned as the command operations center director for the Surface Deployment and Distribution Command at Fort Eustis, Va.

In 2006, Col. Giovino was selected to attend residency at the Army War College, where he received his master’s degree in strategic studies. In 2007, he was assigned as the director of Operations/G3 for the Surface Deployment and Distribution Command at Ft. Eustis, Va. In this role Col Giovino managed global surface transportation for the Department of Defense in support of the United States Transportation Command.

Col. Giovino retired from active duty in 2011. He is now the director of contract management and compliance for U.S. Flag Liner Services of Maersk Line, Limited based in Norfolk, Va. He and his wife, Kim, have two children, Christopher and Anthony. 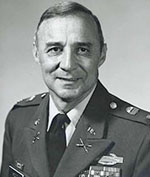 Giac P. Modica enrolled as a student at St. Bonaventure College after graduating from Southside High School in Elmira, N.Y. An Army ROTC cadet, he graduated in 1956 with a bachelor’s degree and a commission as an artillery second lieutenant.

After completing the Field Artillery Officer Basic Course, he reported to Fort Bragg, N.C., where he served as a battery XO in a 155mm artillery battalion and battery XO of a 155mm self-propelled howitzer battalion.

Modica was transferred to Baumholder, Germany, and became the reconnaissance and survey officer, and later gun platoon commander and weapons assembly officer of a 280mm artillery battalion. He later was as the assistant S2 of the all-nuclear 52nd Artillery Group (Corporal and Honest John missile battalions).

In 1959, he was selected as the aide-de-camp to the commanding general of the 8th Infantry Division Artillery, which required him to attend the U.S. Army Airborne School. After one year, he was selected to command a 105mm howitzer battery in the 2nd Artillery Battalion (ABN).

In 1962, he returned to the United States to attend the Field Artillery Advanced Course, after which he was assigned as assistant S3 of the 214th Artillery Group in 1963 and as the S3 of the 17th Artillery Battalion.

In 1964, Modica received orders for Vietnam, where he was the district advisor of Thu Thuy District, Long An Province for six months before being recruited to work with an unnamed agency to train local forces in combat operations.

Selected for below the zone promotion to lieutenant colonel, he returned to Germany as the S3 of the 210th Artillery Group, and later commanded the 2nd Battalion, 28th Artillery. In 1971, Modica was selected for the Vietnam Province Senior Program, which required him to complete a 24-week language and culture course before being placed in a two-year assignment in Vietnam.

In 1972, he was assigned to Phouc Tuy Province as the province senior advisor. He earned the Soldier’s Medal for pulling a Vietnamese soldier out of a burning armored car and the Air Medal with Valor device for providing suppressing fire from a helicopter during a fire fight.

In 1974, Modica was assigned to U.S. Army Staff as Chief of the Missile Branch of the Assistant Chief of Staff for Research, Development, and Acquisition, and in 1976, he was selected to attend the Army War College.

Upon graduation, he became the Director of Tactics and Combined Arms at the U.S. Army Field Artillery School. He was promoted to colonel in 1977 and selected to command the 9th Missile Brigade (Pershing and Lance) and Field Artillery Missile Evaluation Group.

From 1979 until 1982, Modica was the J3 of USSOUTHCOM and also served as the senior U.S. military representative on the Combined Board, a joint U.S. and Panamanian organization responsible for the defense of the Panama Canal.

In 1982, he was assigned as the installation commander, Fort Meade Maryland and during his tenure there, Fort Meade was selected by FORSCOM as a model installation. Colonel Modica retired in March 1984. 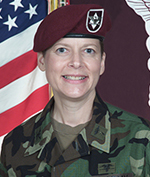 A graduate of Immaculata Academy in Hamburg, N.Y., Pritchett enrolled as a psychology and biology student at St. Bonaventure University and accepted a U.S. Army ROTC Scholarship.

Pritchett served as administrative assistant to the commander of the U.S. military hospital at Nuremburg before returning to the United States to command the medical company at Weed Army Hospital, Fort Irwin, Calif.

She served as Administrative Assistant for the Department of Medicine at Fitzsimons Army Medical Center in Aurora, Colo., from 1987 to 1990. She subsequently served as Executive Officer at the Dental Activity (DENTAC) at Fort Bragg, N.C. In 1992, she became executive officer of the 5th Mobile Army Surgical Hospital (MASH) in the 44th Medical Brigade at Fort Bragg.

In 1994, she served in Korea as the 2nd Infantry Division’s Medical Operations Officer. She subsequently commanded the 61st Area Support Medical Battalion, Fort Hood, Texas, and a medical task force in Bosnia in 1998.

She assumed command of the 28th Combat Support Hospital at Fort Bragg and in 2003 deployed to Southwest Asia and led her unit to Baghdad, where it subsequently was redesignated Task Force 28. She was responsible for the establishment of two hospitals in Iraq and, for 11 months, commanded a force of more than 700 military personnel who manned six mobile surgical units and a mental health and health promotion unit.

Her final military assignment required her to coordinate all medical aspects of Homeland Defense across all military services, in conjunction with federal and state medical agencies working in the Capital Region of Washington, D.C.  She retired in 2006 as a colonel after 27 years on active duty.

Pritchett became senior deputy director in the District of Columbia Department of Health and planned the District’s response to acts of bio-terrorism and other public health emergencies, including medical support of the 56th presidential inauguration in January 2009 and the response to the H1N1 Influenza outbreak in May 2009.

In November 2011, she became president and CEO of Pritchett and Associates LLC, to provide professional consultation to governmental, non-governmental and private agencies. In November 2013, Pritchett became the Deputy Assistant Commissioner for Regional and Local Health Services and Director, Office of Public Health at the Department of State Health Services for the state of Texas.

She received a master’s degree from Baylor University in Healthcare Administration and was awarded a fellowship with Department of Health and Human Services. She is a graduate of the Naval Postgraduate School, a Fellow in the American College of Healthcare Executives and a Certified Emergency Manager.