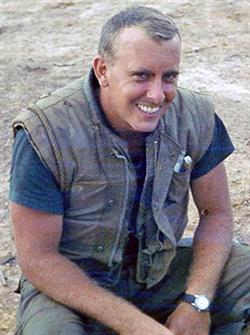 He was assigned as a platoon commander to Company M, 3rd Battalion, 4th Marines, reinforcing the 3rd Marine Division on October 4, 1967. The battalion had been deployed to the Republic of Vietnam for more than a year and he was engaged in combat almost immediately.

As part of Operation Kentucky, on 18 January 1968, Burns’ platoon was in a blocking position supporting another unit that was attacking a well-entrenched NVA force northeast of Con Thien. When his platoon came under fire, Burns unhesitatingly led a counterattack against the enemy emplacements.

“Undaunted by the enemy fire impacting around him, he moved about the fire-swept terrain directing his men and personally killed five North Vietnamese soldiers,” the account of his heroism read. Overrunning the enemy positions, Burns quickly consolidated his Marines and although still under fire, moved from position to position and encouraged his men.

Burns saw that an adjacent unit that was maneuvering toward the enemy was pinned down by fire from an NVA position on a ridge to his front. The narrative continues, “Reacting instantly, he enveloped the enemy force and launched an assault which took the enemy soldiers by surprise, causing them to abandon their positions and flee in panic and confusion into the deadly fire of the other unit.”

For his actions that day, Burns was awarded the Silver Star Medal, the citation concluding, “By his courage, aggressive fighting spirit and unwavering devotion to duty in the face of great personal danger, Second Lieutenant Burns upheld the highest traditions of the United States Naval Service.”

Less than a week later, on 24 January, the commanding general of the 3rd Marine Division ordered the 3rd Battalion to clear an ambush site where the 64th NVA Regiment had struck an American convoy moving from Dong Ha toward Camp Carroll on Route 9.

Burns, with Mike Company, was among the first Americans to arrive near the objective and with darkness falling, he organized his platoon into a defensive position. At dawn on 25 January, Mike Company swept through the ambush site and into the valley, meeting the enemy as other elements of the battalion arrived by helicopter.

By the end of the day, Burns was among 800 of his brother Marines, and his company’s position atop a hill anchored the battalion’s position. The NVA fired mortars into the position throughout the night, wounding 17 Marines, but did not attack and the clearing operation continued on 26 January with limited contact.

The violent assault quickly evolved into a desperate free-for-all with warriors grappling in hand-to-hand combat.” Two supporting companies fought their way to Mike Company’s position as the fight continued through the day. By 1700, the enemy battalion was forced off the position, having lost 130 killed in action, but the fight for control of Route 9 cost Third Battalion, 4th Marines 21 men killed and 62 more wounded.

John R. Burns was among the dead, having fallen alongside five men from his company, including a private first class from Buffalo, New York, near the college where Bob had been a popular student.

He was awarded posthumously the Silver Star Medal for his actions in the 18 January fight near Con Thien, and his name appears on the monument in front of the Reilly Center that honors the members of the St. Bonaventure family who sacrificed their lives for our freedom.

His name is also on Panel 35E, Line 44 of the Vietnam Veterans Memorial Wall in Washington, DC, and the memory of Bob Burns remains with his classmates and friends who knew him at St. Bonaventure University.

A Distinguished Military Graduate of the University’s Army ROTC program, he received a Regular Army commission as a Field Artillery second lieutenant and was assigned as a mortar battery forward observer at Fort Devens, Massachusetts.

In October 1959, he became a launcher platoon leader in a Nike Hercules/Ajax Air Defense battery at Grand Island, New York.

Karl completed the Artillery Basic Officer’s Courses at Fort Sill, Oklahoma and Fort Bliss, Texas in September 1960 and was assigned to the 82nd Airborne Division at Fort Bragg, North Carolina. After completing the Division’s Airborne course, he served as a forward observer in a 105mm howitzer battery before he was branch transferred to the Ordnance Corps.

As a lieutenant, he commanded Company B, 782nd Maintenance Battalion in the 82nd Airborne Division until June 1962. He was selected to pursue graduate studies and earned a Master of Science in Mathematics from the University of Delaware in June 1964..

He was assigned for one year as a member of the general staff, 9th Logistical Command, Korat, Thailand and returned to the United States to attend the Ordnance Officer’s Advanced Course. In June 1966 he was assigned as an assistant professor of Mathematics at the U.S. Military Academy. He returned to Southeast Asia in June 1969 as Materiel Officer and Executive Officer, 27th Maintenance Battalion, 1st Cavalry Division (Airmobile) in Vietnam.

After completion of his one-year tour, he attended and graduated from the Army Command & General Staff College and in June 1971was assigned as Research and Development Staff Officer, Benet Weapons Laboratory and then as Executive Officer, Watervliet Arsenal, New York..

In July 1978 he assumed command of the Detroit Arsenal Tank Plant in Warren, Michigan. After three years, he was selected to attend the Industrial College of the Armed Forces, and upon graduation, returned to the Pentagon as Director, Industrial Base Programming, Under Secretary of Defense for Research and Engineering.

He returned to Watervliet Arsenal and served as that installation’s commander from July 1983 until January 1986, when he was assigned as Assistant Chief of Staff for Operations, U.S. Army Strategic Defense Command. Karl retired at the grade of colonel in September 1987.

Karl is a graduate of numerous military schools, including the U.S. Army Command and General Staff College and the Industrial College of the Armed Forces.