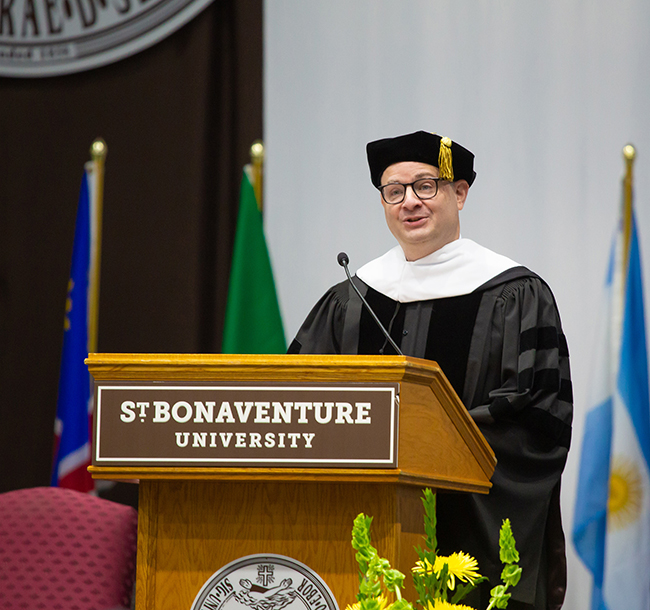 Also honored were Tom Marra, ’80, retired president and CEO of Symetra Financial Corp., and Brigadier Gen. Maureen Keenan LeBoeuf (ret.), ’76, the first woman to chair a department at the U.S. Military Academy at West Point. LeBoeuf is part of the nine-sibling Keenan clan of Olean, whose father, Leo, taught English at SBU for 52 years and who also received an honorary degree, in 2000. All nine Keenans attended St. Bonaventure. 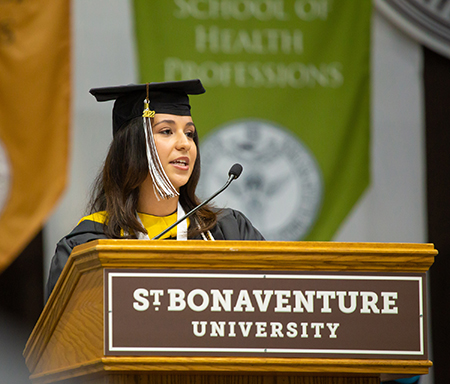 “But people here have a tendency to take tremendous leaps out of their comfort zones and trust that things will work out. And somehow, they always do.”

John Sheehan, chair of the university’s Board of Trustees, stressed the common bond of all Bonaventure graduates.

“Never forget that Bonnies are family, and that this special place will always be your second home. Thank you for the impact you’ve made here – for your scholarship in the classroom and your service in the community,” he said.

Before the ceremony began, a tribute video was played on the arena scoreboard to honor the memory of basketball legend Bob Lanier, ’70, who died Tuesday. 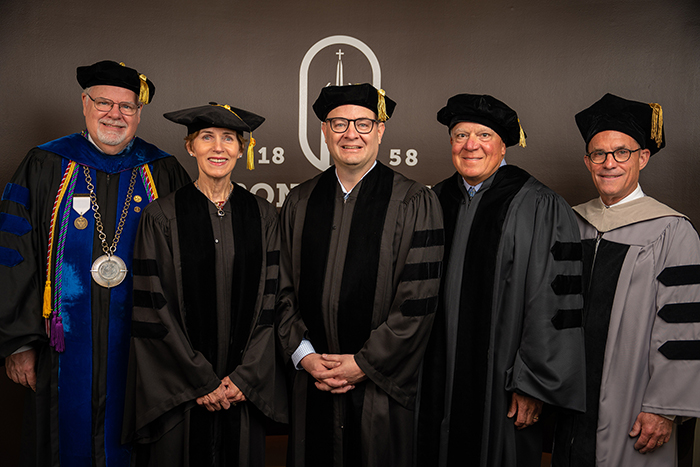 Wojnarowski also took the opportunity to reflect on the passing of the university’s most famous and beloved alum, and the mass shooting Saturday in Lanier’s hometown of Buffalo.

The class was seated on the Reilly Arena basketball court that bears Lanier’s name. In 1968, Lanier, in teammate Jimmy Satalin’s dorm room, opened up to teammates about what it felt like to be a young black man on an almost entirely white campus in that era.

One of Bob’s teammates described it as a seminal moment in his entire Bonaventure experience. For all of them, it was the beginning of learning how it might feel to walk in another man’s shoes.

“Remember Bob Lanier for electrifying millions as one of the great players in the history of the game, but remember him, too, as a sophomore opening up his heart and opening up young minds in a second floor Devereux dorm room,” Wojnarowski said. “All of us need to remember that someone else’s experience may not remotely resemble what we imagine it to be. Listen and love.”

Also recognized at Sunday’s ceremony were: