Bonnies Athletics set for a bold future thanks to campaign vision

In recent years, Bonnies fans have turned heads nationwide as they traveled across the country in support of their school.

To Brooklyn and Washington, D.C., for the Atlantic 10 Tournament.

To Dayton, Ohio, and Dallas, Texas – on 48 hours’ notice – for the NCAA Tournament.

While the locales have changed, one thing remains the same: the unwavering support of Bona Nation, an amazing display of St. Bonaventure pride that has captured the attention of the nation on multiple occasions.

Now, through visions for “A Bolder Bonaventure,” plans are in place to help translate that passionate following into investments that not only benefit each of St. Bonaventure’s nearly 400 student-athletes, but also allow the Athletic Department’s 19 NCAA Division I teams to think bolder than ever before.

On Sept. 12, St. Bonaventure publicly launched the largest fundraising campaign in its history — “A Bolder Bonaventure: Ignite. Inspire. Invest.” — seeking to raise $125 million by May 31, 2025. Part of the overall campaign is a focus on improving our athletics facilities.

“Every piece of the athletics pillar of the campaign has our student-athletes as the focus. Our goal is to ensure a strongly competitive Division I experience for them,” said Bob Van Wicklin, vice president for University Advancement. “This is an ambitious plan. The first step to making it happen is the support of our alumni and friends.”

Through A Bolder Bonaventure, the goal of modernizing campus to attract the students of today and also tomorrow has been imagined with bold ambitions. Included in the plans are a commitment to Division I athletics requiring improvements to the athletic campus as well as the Reilly Center, which is over 55 years old, to attract top prospective student-athletes with facilities that beat the competition.

“The most important aspect of this campaign is that it will touch every one of our student-athletes,” St. Bonaventure Director of Athletics Joe Manhertz said. “It’s not something that will better one or two teams; every single Bonnies student-athlete will be positively impacted. The landscape of college athletics is always changing, and it is an uneven playing field. This investment in our student-athletes and teams is a chance to make Bonaventure a sustainable Division I institution and allow our teams to compete at a higher level.”

At the forefront of the campaign are designs for a new nearly 10,000-square-foot Athletics Performance Center.

In the past five years, Bona’s student-athlete population has increased by more than 100 and has greatly outgrown the department’s current weight room. Currently, several teams with large rosters are forced to divide into smaller groups at different times, creating potential academic conflicts, or use hallways or the Reilly Center side courts for training.

The new Athletics Performance Center will include space that is five times the size of the current weight room facility, allowing space for several teams to train at the same time using state-of-the-art equipment. The new facility would have an immediate impact on every Bonnies student-athlete from its first day of operation.

“A facility of this nature will rival any Power 5 or professional sports performance facility,” said Darryn Fiske, St. Bonaventure’s longtime director of strength and conditioning. “It will give our coaching staffs the ability to attract that next-level athlete to help compete for conference and NCAA titles. Every student-athlete dreams about competing on the ‘big stage.’ A facility of this nature will give us the opportunity to take our training to even higher levels than ever seen in St. Bonaventure history and help all of our current and future student-athletes achieve those dreams.”

The Athletics Performance Center will be the centerpiece of a 25,000-square-foot addition to the Reilly Center, including a new basketball practice facility accessible to both the men’s and women’s basketball programs.

The practice facility will allow Bona’s continued competitive success in the always challenging Atlantic 10, which continues to position itself as one of the nation’s top basketball conferences. Including direct access to the Athletics Performance Center, the facility will house coaches’ offices and locker room areas adjacent to the new practice court.

While the basketball teams will move their locker room areas to the new building, additional Reilly Center renovations will impact each Division I team with dedicated locker room space created for each squad. The days of teams sharing locker rooms will become a thing of the past.

“At the Division I level, every team should have its own space, something to call their own,” Manhertz stressed. “As we looked at the renovation plans and put the puzzle pieces together, that was extremely important to us. Division I teams should not be sharing locker rooms, and this plan takes care of that.”

In addition, student-athlete support areas including sports medicine, academic support and nutrition will be renovated and expanded. Coaching staffs will also have their offices together, making them more accessible to their athletes.

“We put a focus on nutrition, the training room and our sports medicine areas to make sure the student-athletes have space to stay healthy,” Manhertz added.

Other plans for the Bolder Bonaventure Athletics Pillar include a turf field with air-supported structure, more commonly known as a “bubble.” With a field large enough to accommodate Bona’s Division I sports, as well as rugby, the planned facility will bring Bonnies teams out of the harsh Western New York winter elements and allow for year-round training.

Further, multi-purpose field additions will bring increased seating and facility upgrades to the Marra Athletics Complex. Along with a better fan experience, a press box and broadcast booth will be constructed to allow proper setup for TV crews, which will greatly improve existing ESPN+ broadcasts as well as open the door for Bonnies lacrosse and soccer teams to host conference and NCAA tournaments, including national TV productions.

Over at McGraw-Jennings Field, Fred Handler Park is set to get a much-needed facelift as well.

Home to Bonnies baseball, renovations will bring the field up to the level of Atlantic 10 counterparts with the replacement of the turf field, the addition of spectator seating and a new press box.

Back in the Reilly Center, the rich tradition of Bonnies swimming and diving will be enhanced with a vision to renovate the Reilly Center pool with the replacement of ventilation, lighting and sound systems, new timing system and record boards and upgrades to locker rooms and coaches’ offices.

All in all, the plans represent a truly bold vision, including big dreams.

The most ambitious fundraising campaign in St. Bonaventure’s history will ensure a future that enriches the experience of our Bonnies long into the future.

“The passion of Bona Nation and our alumni is really second to none. Now it’s time to connect with that and use that devotion to help invest in our student-athletes,” Manhertz said. “As we think about what we do here and why we do it, it is about bettering the student-athlete experience. That’s why we’re here. A Bolder Bonaventure shows that we value Division I athletics. Athletics mean so much to the St. Bonaventure experience and the ways it can help the university are really immeasurable. These plans ensure that we not only continue to compete on a regional and national level, but provide more opportunities for our student-athletes than ever before.”

Manhertz will be a guest on the student-run radio, WSBU 88.3 FM “The Buzz,” on Oct. 24, beginning at 12:30 p.m. ET to talk about Bonnies Athletics as a pillar in the Bolder Bonaventure campaign. The interview will be live streamed at https://www.youtube.com/watch?v=rh2qsPx9xbM.

Questions may be submitted in advance by email to The Buzz at wsbuthebuzz@gmail.com or during the program via The Buzz’s Twitter account (@wsbu). Tag the account and use #ABolderBonaventure hashtag when posting a question.

To learn more about the athletics pillar of the Bolder Bonaventure campaign, please visit GoBonnies.com/BolderBonaventure. 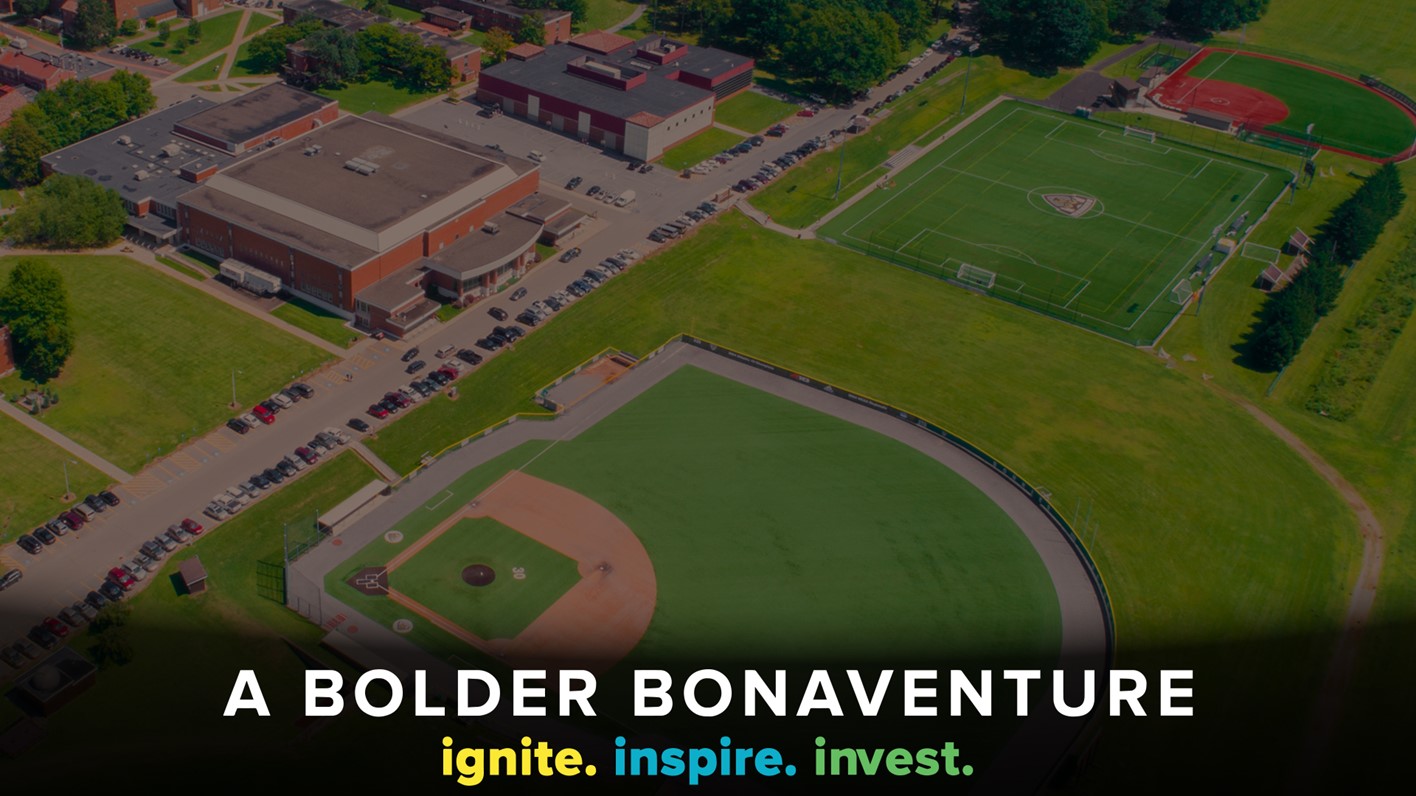