The university community is mourning the passing of Professor Emeritus of English Dr. James Martine, who passed away Wednesday, Oct. 13, 2021. 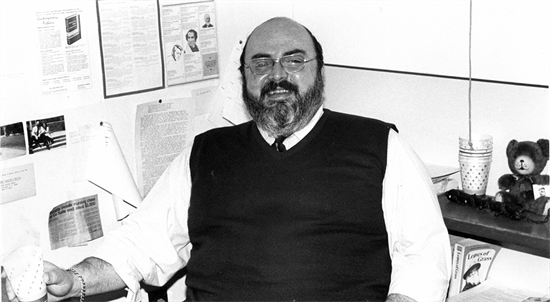 Beloved by students and respected by colleagues, Martine was the recipient of three university awards: Award for Professional Excellence (1984), Award for Teaching Excellence (1993), and Award for Special Services (1998).

In 1999, a $1 million gift from alumnus Leslie C. Quick III, past chair of St. Bonaventure’s Board of Trustees, and his wife, Eileen, established a faculty development endowment in Martine’s name to provide for funding of activities associated with the general education curriculum.

Martine retired from teaching in December 2001, but would stay connected to the university for the next five years as a statistician at men’s basketball games.

“Although he retired before I began at St. Bonaventure, over the last few years Jim took to phoning me to ask about the English department and to chat about American literature,” said Dr. Megan Walsh, acting dean of the School of Arts & Sciences and professor of English. “He had a tremendous impact on our department, his students, and the university as a whole.”

Arrangements are incomplete and will be announced when they become available.

The university flag will be lowered to half staff in honor of Martine.