Damian McElrath, the 16th president of St. Bonaventure University, passed away Sunday, April 25, in Minnesota. He was 92. 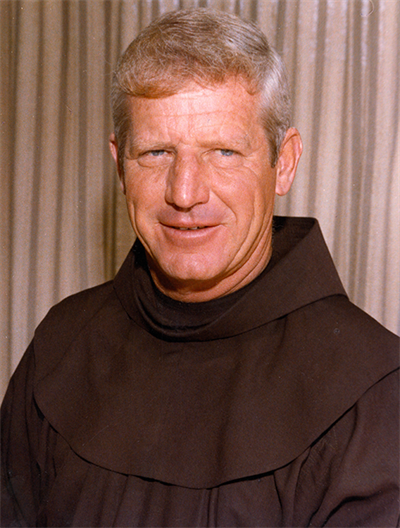 The university flag will be lowered to half-staff through Friday in honor of him.

Highly regarded for his engagement with students and for guiding the university through significant administrative changes, McElrath is remembered as well for the rich, full life he led after leaving St. Bonaventure, as a cherished addiction treatment specialist at the Hazelden Betty Ford Foundation in Center City, Minnesota.

A native of Brooklyn, New York, McElrath was named Edmund at birth. He took on the name Damian when ordained a Franciscan priest in 1954 and kept it after leaving the Franciscan order in 1980. He earned a doctorate in ecclesiastical history at Gregorian University in Rome, completed a post-doctorate fellowship at Cambridge and Oxford universities, and taught at St. Francis College in New Hampshire, Holy Name College in Washington, D.C., and the Washington Theological Seminary in Virginia. He was named president of St. Bonaventure in 1973 and served through 1975.

During his tenure as president, McElrath initiated a controversial residence hall visitation policy. He also guided the university through Middle States evaluation in 1973, helping to usher in bylaw revisions to qualify the university for state Bundy Aid. He was also inducted as a member of the Seneca Nation of Indians.

Fr. Xavier Seubert, O.F.M., guardian of the St. Bonaventure Friary, and Fr. Dominic Monti, O.F.M., vicar of the Friary, were graduate assistants under McElrath in the late 1960s at Catholic University. Fr. Xavier kept in touch with him ever since.

He describes McElrath as a brilliant scholar with a charismatic personality and a tremendous athlete who could often be found playing basketball with students.

Upon completion of his three-year term as president of St. Bonaventure, McElrath told the Board of Trustees that he did not want to be considered for reappointment.

In 1976 he entered a one-year immersive program for clergy on helping people with addiction at the Hazelden Betty Ford Foundation’s Center City, Minnesota, campus. It began what has been described as “a remarkable second act” to an already accomplished life.

McElrath fell in love with seeing patients heal and transform physically, emotionally and spiritually. He stayed for nearly four decades, serving in many capacities, including executive vice president of recovery services, while also writing several notable books about spirituality and the history of Hazelden.

“His contributions to our organization, to the people we serve and to the field of addiction treatment will live on for generations,” said Mark G. Mishek, president and CEO of Hazelden Betty Ford, which is the nation’s largest nonprofit provider of addiction and mental health care, recovery resources, and related education, prevention, research and advocacy. “No one embodied, or captured, the spirit and culture of Hazelden and Twelve Step recovery more than Damian.” 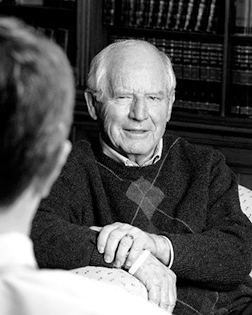 McElrath directed a Hazelden task force that developed the organization’s first youth-specific programming and would become the first leader of what today is known as Hazelden Betty Ford in Plymouth, Minnesota, the nation’s leading addition treatment center for adolescents and young adults.

He retired from Hazelden in the mid-1990s, continued to consult and write books, then returned to the facility in 2001 to work as a spiritual care professional, a role he would serve for another 10 years.

Fr. Xavier is grateful to have known McElrath through “both acts” of his life – as a friar and through his career with Hazelden.

“He was extraordinary in both,” Fr. Xavier said.

McElrath is survived by his wife of 40 years, Sandy; a stepson, Steven Grandstrand, and his wife, Amy; a stepdaughter, Amy Hansen, and her husband, Erik; six grandchildren; and many nieces and nephews.

A memorial visitation will be held May 8 from 2 to 4:30 p.m. at Washburn McReavy Glen Haven Chapel (5125 West Broadway) in Crystal, Minnesota. Masks will be required.

(Our thanks to Jeremiah Gardner, director of communications and public affairs at the Hazelden Betty Ford Foundation, for significant contributions to this article.)