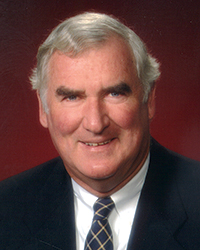 Raymond Dee, class of ’64, former chair of St. Bonaventure University’s Board of Trustees, passed away Tuesday (Jan. 26, 2021) from complications from Myelodysplastic Syndrome. He was 78.

“Our hearts go out to Maureen and the entire Dee family,” said Dr. Joseph Zimmer, provost and vice president for Academic Affairs and acting president of St. Bonaventure. “Ray was a true Bonaventure man. His loss will be deeply felt in the Bonaventure family.”

Ray and his wife, Maureen, were awarded honorary doctorates by the university in 2016. Ray was named a trustee emeritus upon his departure from the Board of Trustees, which he served on from 2000 to 2015, the last three years as chair.

“I know few people who loved St. Bonaventure as much as Ray Dee,” said Fr. Dan Riley, O.F.M., who has known Ray since 1960 when they were freshmen at SBU. “He was like a brother to me.”

Ray and Bonaventure were a perfect match, Fr. Dan said.

Whether as president of his class at Bonaventure or as co-chair of the university’s 150th Anniversary Campaign more than 40 years later, Ray Dee spent much of his life contributing in countless ways to St. Bonaventure, including sending three children to Bona’s.

“Ray was a dear friend, a most trusted colleague and a committed university leader,” said John “Jack” McGinley, ’65, who preceded Ray as Board chair. “Ray bled Brown and White and was so proud to be a Bonnie.”

The 150th anniversary campaign raised more than $95 million for scholarships, faculty and staff development, research and programming, and he was honorary co-chair of the School of Business Campaign that resulted in construction of the William E. and Ann L. Swan Business Center.

“Ray Dee was among the most generous sons of this university,” said Sr. Margaret Carney, O.S.F., who was president during Ray’s tenure as Board chair. “His generosity was matched by his belief that everyone who served SBU needed to give that service with energy and devotion. He had no patience for anyone who was not giving 100% and was quick to support and mentor those in administrative leadership.

“Ray could discern whether or not a leader was exercising integrity and good faith and his commitment to those values brought direct and dramatic changes to Bona’s,” she added. “We should pray in gratitude for all he was to us.”

The Dees’ philanthropy has included major gifts in support of campus initiatives and numerous less heralded projects, such as helping students attend service trips. In 2011, the Dees established the Dee Family Endowment for the School of Business, providing funding in perpetuity for such things as curriculum development, technological upgrades and more.

“Ray loved working with the students,” Palmer said. “He believed not so much in issuing advice but rather in listening and communicating. Ray talked with the students, not to the students. He wanted to know about them and their lives. He really wanted to help. And he would remember them – for years. That was the way of Ray.”

Ray would literally go the extra mile for Bona students – more than a thousand miles, in fact.

“One day he called me up and told me that he would love to teach a class. I told him that would be great, but he was living in Florida – and this was before Zoom,” Palmer recalled. “He said, ‘Don’t worry. I’ll figure it out.’ So every two weeks, for a semester, he would fly to Buffalo and rent a car, drive to campus and teach two classes. He would walk into the class shouting out the kids’ names. He would light up that classroom.”

The Dees also established an endowment fund for Mt. Irenaeus, the Franciscan mountain retreat in Allegany County founded by Fr. Dan more than 30 years ago.

“Ray and Maureen have been wonderful benefactors for the Mountain,” Fr. Dan said. “Ray was always full of questions about our Franciscan heritage and made several trips to Assisi. He felt the university had something important to bring to the world.”

After earning his degree in economics in 1964, Ray, an active member of ROTC at SBU and a newly commissioned second lieutenant, served in the Army in Europe for almost five years before joining Alcoa International in Chicago. He held several positions with Alcoa before he and a small group bought a closed Alcoa plant in Cressona, Pa., and founded Cressona Aluminum Co. in 1979.

The following year, the Dees were off to the United Kingdom, where Ray became managing director of British Aluminium. He ran the company’s extrusion operations for three years before returning to the states to join another start-up company, Service Center Metals, an extrusion company in Prince George, Virginia. Ray served as chair of the company’s board of directors, and was past chair of another aluminum company, Alexin, of Fort Wayne, Indiana.

In addition to his bachelor’s degree in economics from St. Bonaventure, Ray earned his MBA from Loyola University in Chicago in 1972.

Ray was also active in his community. He served as council president at St. John the Baptist Church in Pottsville; was a member of the board at Good Samaritan Regional Medical Center; was board chair at Seton Manor, a senior living facility associated with the Diocese of Allentown, Pa.; and was a board member and former chair of the Foundation for Free Enterprise Education, an organization that teaches high school students about the free enterprise system.

He also served on the board of Alvernia University in Reading and was honored for his service there.

“Having officiated so many marriages in the Dee family, and seeing how the honorary degree was, to Ray, so much more about Maureen than himself, I know that the most important thing in Ray Dee’s life was his family,” Fr. Dan said.

Funeral arrangements are being handled by Yardley & Pino Funeral Home, Sag Harbor, N.Y.  A funeral Mass will be held on Saturday, Jan. 30, 2021, at St. Andrew’s Church, Sag Harbor. Due to circumstances surrounding COVID-19, church capacity is limited to 110 attendees. Knowing that Ray was loved by so many, a celebration of his life will be held at a later date.