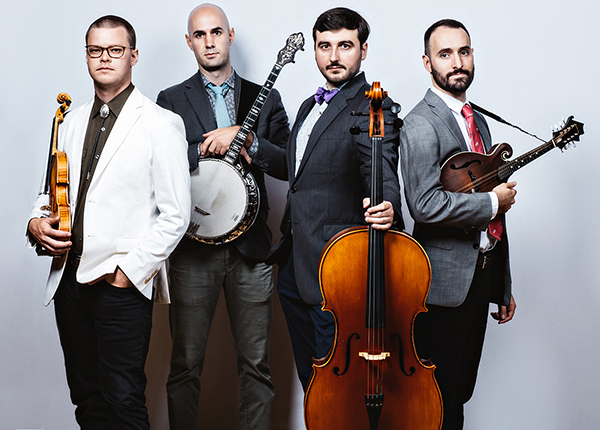 The dynamic multi-string quartet Invoke, winner of the 2018 Concert Artists Guild International Competition, will perform at St. Bonaventure University’s Regina A. Quick Center for the Arts at 7:30 p.m. Friday, Oct 15.

It is the second concert of the 2021-2022 Friends of Good Music performance season.

Described by SiriusXM Classical Producer David Srebnik as “not classical ... but not not classical,” Invoke dodges even the most valiant attempts at genre classification. The multi-instrumental band’s other “not-nots” encompass traditions from across America, including bluegrass, Appalachian fiddle tunes, jazz, and minimalism. Invoke weaves all of these styles together to create truly individual music written by and for the group.

Invoke has shared the stage with some of the most acclaimed ensembles in the country, ranging from the Ensō Quartet to the U.S. Army Field Band, and has also appeared with musicians in greatly varying genres, from chamber rock powerhouse San Fermin to Washington, D.C.’s beatboxer/rapper/spoons virtuoso Christylez Bacon.

Invoke’s debut release “Souls in the Mud” and their follow-up “Furious Creek” feature original works composed by and for the group. The quartet has also performed and recorded numerous world premieres.

Invoke believes in championing diverse American voices, such as their ongoing commissioning project American Postcards, which asks composers to pick a time and place in American history and tell their story through Invoke’s unique artistry.

Given the fluid nature of COVID-19 protocols, please check SBU’s COVID-19 website for the university’s latest policy for campus visitors, including ticketholders for Quick Center performances, or call the Quick Center at (716) 375-2494.

For each Friends of Good Music performance, the Quick Center will open its galleries one hour before the performance and keep them open throughout the intermission. Regular gallery hours are noon to 5 p.m. Monday through Friday, and noon to 4 p.m. on Saturday and Sunday.

Museum admission is free and open to the public year round. For more information, visit www.sbu.edu/quickcenter.

______________
About the University: The nation’s first Franciscan university, St. Bonaventure University is a community committed to transforming the lives of our students inside and outside the classroom, inspiring in them a lifelong commitment to service and citizenship. In 2020, St. Bonaventure was named the #2 regional university value in New York and #3 in the North by U.S. News and World Report.
Leave a comment Newest on top Oldest on top
Load more comments