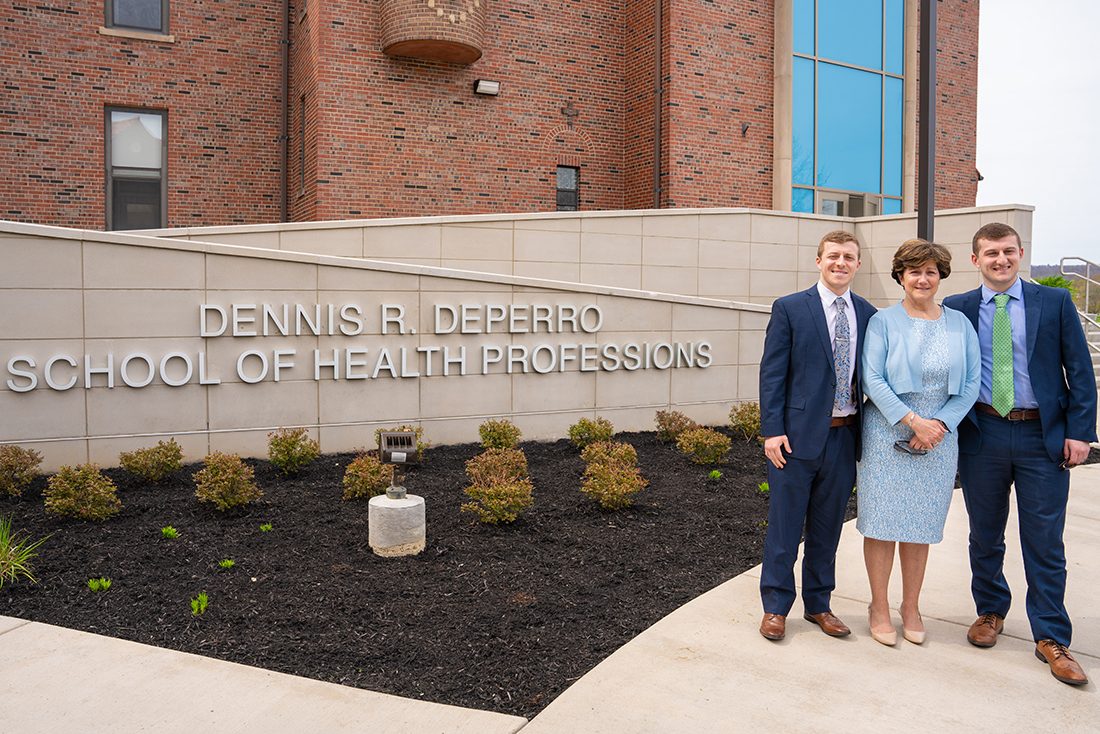 It’s official: The School of Health Professions at St. Bonaventure University has a new name.

More than 150 people — family, friends, faculty, students and staff — turned out Thursday afternoon in the San Damiano Room of Francis Hall to celebrate the dedication of the Dennis R. DePerro School of Health Professions.

Les Quick III, ’75, said he struggled for two weeks trying to come up with the words he’d say at the dedication ceremony, even admitting he was reluctant to attend.

But then, Quick realized, “This is really a celebration of Dennis’s passion and humility and intensity that he brought to us. … For a college president, there weren’t too many people who didn’t like Dennis and that’s unusual. This is the most fitting tribute.”

Les Quick and Jim Meyer, both university trustees at the time, co-chaired the search committee that ultimately led to trustees hiring DePerro in November 2016.

The Health Professions initiative was championed by DePerro from the moment he officially became president in June 2017 until his passing March 1, 2021, due to complications from COVID-19.

“Without his vision, we wouldn’t be here today,” Meyer said. “What we should remember about the kids who are going to graduate from this school is that they are so needed, particularly in the communities around St. Bonaventure and in Western New York.” 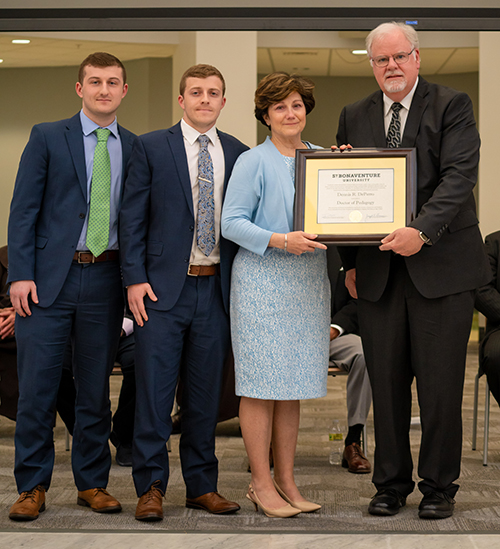 DePerro was also awarded an honorary doctorate by the university, an idea first broached informally shortly after he passed away but not kick-started until Jack Steger approached his fellow senior class officers. The Class of 2022, which graduates May 15, is the last class now at SBU to share a full pre-pandemic year with DePerro.

University administrators fully embraced the idea and decided to honor him Thursday while his family was on campus for the renaming of the School of Health Professions. Steger, who was named one of SBU’s two Ideal Bonaventure Students last month, read the citation recommending DePerro for the honor.

A 1977 graduate of Buffalo’s Bishop Timon, DePerro wanted to go to college at Bonaventure but family finances dictated he attend Canisius instead.

“Forty-five years ago, all that a young man from South Buffalo wanted was a chance to earn a degree from St. Bonaventure University,” Steger said. “Today, that wish will be granted.”

“It has been the greatest professional honor and privilege of my life standing in the shoes of our friend Dennis and fulfilling the role of the presidency for the last 16 months,” Zimmer said. “I have the highest appreciation for all that he accomplished in his time with us. Bestowing this degree and renaming this school completes the circle of love we have for Dennis, Sherry, Andrew and Matt.”

Though he served less than four years as president of St. Bonaventure, DePerro left a lasting imprint on the school and its future.

The Quick and Meyer families have long been generous supporters of the university.

Les Quick earned a B.B.A. in finance in 1975 from St. Bonaventure and has served more than 25 years on the university’s Board of Trustees. He is founding partner of Simon Quick Advisors.

Jim Meyer earned a bachelor’s degree in economics in 1976 and an MBA in 1979 from St. Bonaventure. He served on the university’s Board of Trustees for 10 years. In December 2020, he retired after 16 years at SiriusXM where he rose through the ranks to become CEO. Nina Meyer is a 1979 journalism and mass communication graduate.