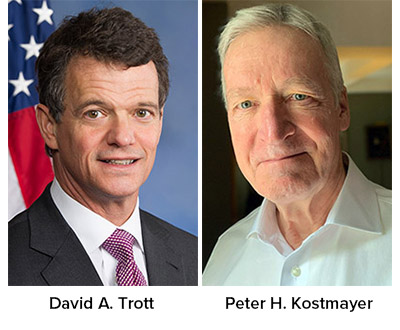 Two former congressmen will visit St. Bonaventure University Nov. 15 and 16 to meet with students and hold a public forum as part of the Congress to Campus program.
Peter H. Kostmayer, D-Pennsylvania, a congressman for 14 years, and David A. Trott, R-Michigan, who served Congress from 2015-2019, will visit numerous classrooms during their stay, engaging in open dialogue with students.
The first day, Monday, Nov. 15, will conclude with a public forum from 7-8 p.m. at the University Conference Center in Doyle Hall. Kostmayer and Trott will take questions from the audience while addressing the topic “How Can We Overcome Partisan Polarization in Our Political System?” The forum is free and open to all.
Hosting the forum will be Dr. Josiah Lambert, associate professor of political science at St. Bonaventure.
“In recent years, partisan polarization has created a toxic atmosphere where Democrats and Republicans see each other as enemies to be defeated, rather than as loyal opponents who work together constructively to address our common problems,” said Lambert. “American democracy requires us to accept opposing points of view, and to compromise. This forum will address how we can overcome this climate of partisan polarization and find common ground in our democracy.”
Congress to Campus, the flagship program of the Association of Former Members of Congress, has been spreading its message of bipartisanship and civility in the face of political disagreement for more than 40 years. Bipartisan teams of former members of Congress, congressional staff members and diplomats travel the country each year to dialogue with college students and the public.
They share insights into their lives in public service, including how to run for political office, managing the work/life balance on Capitol Hill, and the thrill and privilege of debating national legislation on the House or Senate floor.
During their two-day visit to St. Bonaventure, Kostmayer and Trott will visit classrooms to engage with students of history, political science, prelaw, journalism, and international relations. They will also have lunch both days with student leaders and members of the university’s Model Senate.
Kostmayer, elected to the House of Representatives in 1976 at the age of 30, became the first Democrat to represent Pennsylvania’s Bucks County since 1932. He lost a close race in 1980, but was re-elected in 1982 and served for another 10 years. He then served the Clinton administration as a regional administrator for the Environment Protection Agency.
Kostmayer later headed Zero Population Growth (now Population Connection) in Washington, D.C., and in 2005 became CEO of Citizens Committee for New York, which provides micro-grants to community-based organizations in poor neighborhoods. He retired in 2020.
Trott owned or headed a number of businesses before his election to Congress in 2015. As a House member, he served the Foreign Affairs, Judiciary and Financial Services committees. He was an original co-sponsor of legislation reforming the Dodd-Frank Wall Street Reform and Consumer Protection Act, signed into law during the 115th Congress.
Since leaving Congress, Trott has been a visiting lecturer at the University of Michigan and Eckerd College in St. Petersburg, Florida, and has served on a number of boards. He is presently chairman of ATA National Title Group, which services companies and individuals in real estate transactions.
To learn more about Kostmayer, Trott and the Congress to Campus program, visit www.sbu.edu/congress-to-campus.
The University Conference Center is located in Doyle Hall, behind the University Chapel. Community members planning to attend should use the main entrance to campus and park in the new parking lot in front of the chapel.
___________
About the University: The nation’s first Franciscan university, St. Bonaventure University is a community committed to transforming the lives of our students inside and outside the classroom, inspiring in them a lifelong commitment to service and citizenship. In 2020, St. Bonaventure was named the #2 regional university value in New York and #3 in the North by U.S. News and World Report.
Share on Facebook
Share on Twitter
Share by E-Mail
All Rights Reserved © 2023