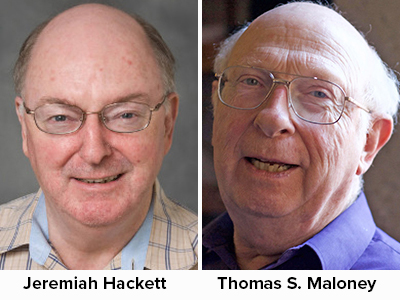 The medal is awarded in recognition of meritorious excellence in medieval scholarship and Franciscan studies.

The award was announced at a gathering of scholars at the Roger Bacon Symposium held by Zoom at St. Bonaventure University. The keynote of the conference was a talk delivered by Hackett on the soon-to-be published joint work of his and Maloney on Roger Bacon’s “Philosophia Moralis” (Franciscan Institute Publications, 2022).

Hackett’s research interests lie in the fields of history of philosophy, metaphysics, philosophy of mind, epistemology, and moral philosophy. He has published widely and is currently interested in Roger Bacon and Averroism. Recently he was honored to receive a Festschrift, “The Philosophy and Science of Roger Bacon: Studies in Honour of Jeremiah Hackett,” edited by Nicola Polloni and Yael Kedar (Routledge: 2021).

Maloney’s specialization is medieval philosophy, but he also has taught courses in ancient Greek philosophy and the philosophy of religion. He has published widely and his research area is medieval logic and semantics, with a focus on Roger Bacon. He is working on a new Latin edition and translation of Bacon’s “Opus minus.” Among his many publications is “Roger Bacon: ‘A Compendium of the Study of Philosophy,’” edited by Thomas S. Maloney (Oxford: 2019).

Roger Bacon was a medieval English philosopher and Franciscan friar. Known by his scholastic accolade, “Doctor Mirabilis,” Bacon is also recognized as the father of the modern empirical method in the sciences.

“The publication of Prof. Hackett and Prof. Maloney’s exquisitely annotated translation of the “Philosophia Moralis” marks a milestone in the contemporary resurgence of interest in the interdisciplinary work of Roger Bacon,” said Fr. David. He noted Bacon’s commitment to exploring the relationship among the liberal arts and their reflection of the divine in the world speaks especially to those seeking a wholistic/holistic perspective on the role of education in the pursuit of wisdom.

For other recent news regarding the Franciscan Institute, visit www.sbu.edu/franciscaninstitute.