It did not take Adam Irwin very long to feel at home on St. Bonaventure University’s campus.

That is because the senior cybersecurity major from Warren, Pennsylvania, who will be graduating a year earlier than scheduled, has been around campus since he was a young boy. He explained that his mother, father and grandmother all obtained their master’s degrees from the university. 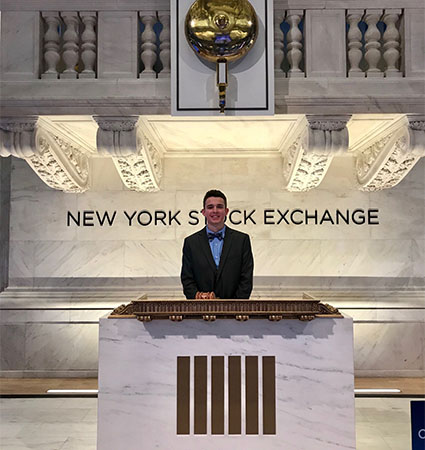 “I’ve been going to basketball games for as long as I can remember,” Irwin said. “It was kind of a lifelong thing, so how it played out was pretty much meant to be.

“I came in and met friends immediately. It felt like home. I am from a small town so it was an easy transition for me.”

As a junior and senior in high school, Irwin said he participated in SBU’s dual enrollment program.

By the time Irwin arrived on campus as a freshman, he already had a favorite professor in Schrems.

“Whenever I have issues, problems, or questions, I always talk to her,” he said. “She’s kind of a life coach.”

And it was Schrems who guided Irwin through an important chapter of his college years.

Last fall, Irwin dropped by Schrems’ office to discuss internship opportunities and how to find the right one. She suggested he start reaching out to companies immediately. 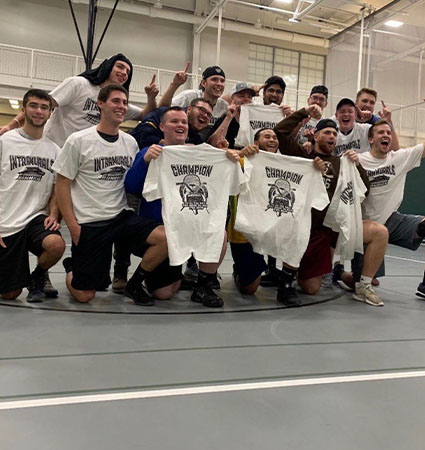 "I told him he should write to companies now and see where they stood with their internships. That way, he would be on their radar before everyone else,” Schrems said. “After all, success in business and marketing revolves a lot around who is there first. I wanted Adam to be that guy.”

Irwin decided to apply for a handful of internships. TJX, a cybersecurity company in Boston, flew him to the city for an interview in November 2019 just before Thanksgiving. When Irwin returned to campus for the tail end of the fall semester, he had an internship.

But then the pandemic commenced with force in March and pushed his internship to the wayside soon after.

Just as his Bonaventure journey has been meant to be, though, it didn’t end there.

TJX Companies offered Irwin a job after graduation this coming spring as a solution developer. Irwin said he has until the end of September to accept the offer.

“I've been fortunate in my career to teach a plethora of wonderful young men and women; however, Adam is one of the best,” Schrems said. “It's not because he's smart (he is. . . super-smart actually) or focused or all those things that teachers crave in students. It's more because he just wants to learn everything he can about everything he's interested in.”

Irwin has been involved in a variety of activities throughout his academic career. He is a member of the Campus Activities Board, Team Bona’s, and club baseball. He once visited the New York Stock Exchange with the Business Information Systems Club. 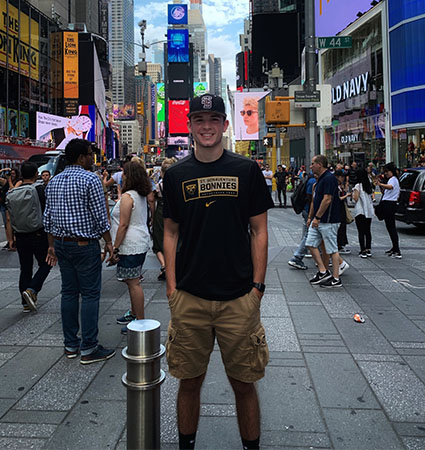 Most important to him, though, is his work as a student ambassador.

“It’s a lot of fun to see students come on campus for their first time, being curious about how the Bonaventure life works. I like to answer questions about what life is like on campus.”

Irwin plans to make the most of the time he has left on the campus he has come to love since he was young.

If he were to go back in time, it’s clear that he wouldn’t change much about his journey. The advice he would offer himself as a freshman clearly illustrates how he has been able to make the most of his time as a St. Bonaventure student.

“Always work hard, get ahead of your work...and be able to hang out with friends. I am graduating a year early but it’s a quick four years for anyone,” he said.  “Do your work, get educated and have fun.”