Revealing the divine through art 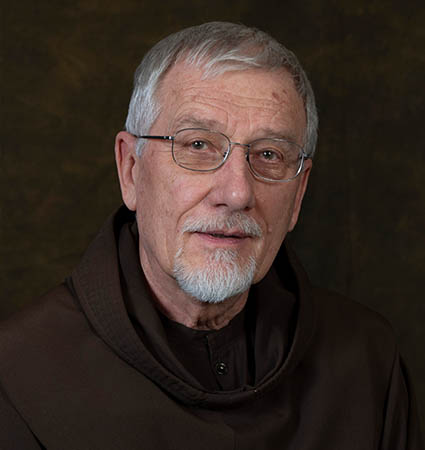 “Good art has an immediate impact on us that causes us to pause in wonder,” he said. “That pause is an opportunity for our hearts to catch up with our minds.”

For more than 40 years, Br. Robert has been creating innovative icons that depict “official” saints, but also holy persons not yet canonized. His work has been strongly influenced by his experiences among the poor in many different countries, and it is rooted in his Russian and Franciscan roots.

His paternal grandparents emigrated from tsarist Russia in the early 1900s. His grandmother wouldn’t talk much about life in Russia because of hostility in this country toward immigrants, but instead she shared stories of holy hermits who became saints.

Among the mysterious hermits Br. Robert learned about in his youth were Saint Seraphim of Sarov, a Russian monk who once tamed a ferocious bear, and Saint John of Bulgaria, a miracle worker who found solace living in the remote Rila Mountains.

“What inspires me about these saints is that during their lives, they became the Gospel,” Br. Robert said. “They embodied it so well that simply by looking at them, you could see Christ.”

He hopes to depict that radiance in each of his icons.

An icon is a representation of some sacred person, such as Jesus or an angel or a saint, painted usually on a wood surface, and venerated itself as sacred. The beginnings of Byzantine iconography can be traced back to the fifth century. 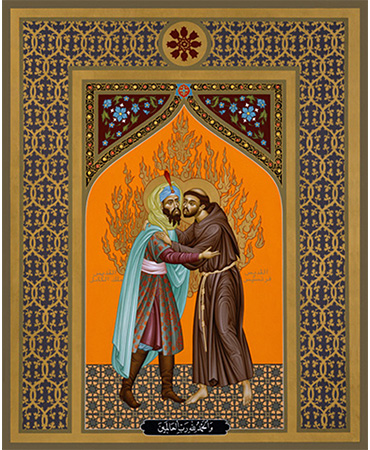 “Instead of inviting you into itself through realistic perspective, an icon, with inverted perspective, comes out to you,” he explained. “That coming out is an eschatological statement, reminding you that you are in the presence of God.”

A retired Franciscan friar living at St. Bonaventure Friary, Br. Robert’s work is known worldwide. One of his most popular icons portrays the historical encounter between St. Francis and Sultan Malik al-Kamil in Egypt during the Fifth Crusade (see inset).

Also popular are his many icons of Christ. Br. Robert made the bold decision not to limit depictions of Jesus to the centuries-old “European face” characteristic of traditional icons. Instead he creates moving images of Christ in the “now”—as an immigrant facing a barbed wire fence, for instance—and in the context of various cultures, such as his Apache Christ, which celebrates the customs and beliefs of the Mescalero Apaches of New Mexico. Just as Francis met with the sultan, Br. Robert met with the medicine men of the Mescalero, and climbed Sierra Blanca, their sacred mountain, to pray. Their time of listening to one another resulted in the eight-foot-tall icon Br. Robert created, which was blessed by both the medicine men and a priest during Mass in their church.

Among those icons is one of Dorothy Day, a Catholic convert who lived among the poor in New York City’s Bowery, sharing their discomforts for decades while calling for social justice.

“I have a reputation for being a rebel, for breaking out of where I ‘should’ be,” said Br. Robert. “No change that I have ever introduced into iconography has not come without incredible thought, sometimes even with discomfort. It was never done for the sense of rebellion. It was trying to look at where things could be now, instead of the way they once were, and still be true to what they truly are.”

Born in 1946 and raised with his brother and sister in a rural area in the Rocky Mountains of Colorado, Br. Robert knew early in his life that he wanted to become a religious brother. While he had worked as a visual artist since childhood, in 1978 he became an apprentice to a master icon-painter in a Greek Orthodox monastery in Boston. 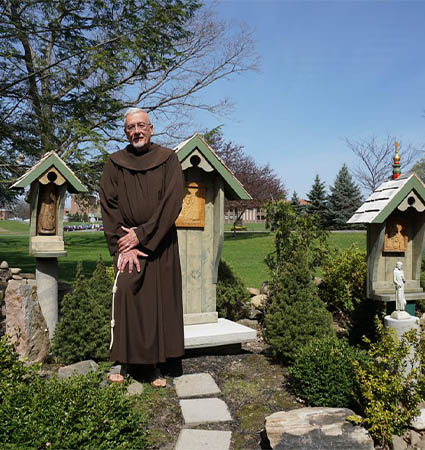 “The icons I love to paint now are of ancient Orthodox saints,” he said. “Nearing the end of my life, I find myself returning to the saints I met as a child and loved as a young man.” These include St. Nicholas, St. Anthony of Egypt, and St. Seraphim.

Throughout a monastic life that spans many years, Br. Robert has lived among the poor in both the Third World and the United States. (He was even once a goat-herd for a herd of Nubian goats at a desert monastery.) His most memorable experiences were in the slums of Mexico City, at a Russian orphanage in Santiago, Chile, and during the 30 years he lived among Native Americans in New Mexico and Arizona. While he misses the vivid colors found in the high deserts of the American Southwest, he is looking forward to putting down roots at St. Bonaventure.

“I hope I can stay here the rest of my life,” he said.

He would like to teach apprentices here at the university.

“Iconography requires a fine hand. It can take months to learn how to control the paint brush. This is a contribution I can make at St. Bonaventure. The icons are not just paintings; they are theological statements. It’s a very deep subject,” he said. “For an artistic student whose Christian faith matters to them, this type of apprenticeship would be something they wouldn’t find at any other university in the United States.”

While he first learned to paint with egg tempera (egg yolks mixed with powdered earth colors), he eventually learned how to adapt the technique to acrylic paint. He also uses real gold, which makes his work radiate light.

He invites alumni, faculty and staff to visit his icon meditation garden, which is located just outside his studio at the Friary.

“I want them to feel free to view the icons and to sit and meditate here,” he said.

To learn more about Br. Robert and to view or purchase his icons, please visit Trinity Stores at https://www.trinitystores.com/artist/br-robert-lentz-ofm.

Lower right: Photo by Priscilla Contreras, ’21, now a graduate student in the School of Business.

Master iconographer Br. Robert Lentz, O.F.M., is shown in the meditation garden at the St. Bonaventure Friary that he created with his own hands at the age of 75, using three tons of river rock, two tons of landscaping blocks, and a number of icons from the Ukraine. Made of ordinary pine, with cedar shingles and a cross on top, the icon houses resemble wayside shrines found  throughout Russia.