Tagging along with his grandfather to various job sites brought a young Jamie Peace to St. Bonaventure’s campus in the early 1960s. He hailed from a family of master stonemasons and the university’s brick and mortar projects at the time (Doyle Hall and the Administration Building) kept the crews busy, offering him a chance to watch artisans at work. 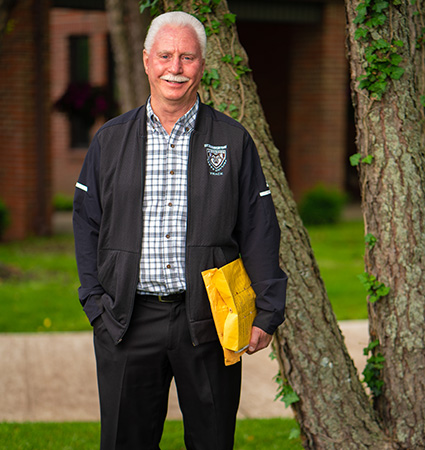 By the time the Reilly Center and Shay-Loughlen Halls were being built in back-to-back construction contracts, Peace was old enough to be moving about on his own and curious enough to be scolded for wandering into construction areas.

He also met the friars, and a lifelong bond was forged.

Peace grew up in Portville, New York, the eldest of five children in a Catholic family. His maternal grandfather, Jack Rowe, was founding partner of Stohr & Rowe masonry contractors in the mid-1930s. His uncles, father, and he himself helped continue the company into the 1990s. But his strong connection with the university drew him to creating a career here.

For 43 years and 44 classes, Peace has worked at St. Bonaventure. He began as a roustabout and today serves as manager of mail and receiving.

“Bonaventure has been my life,” he said. “Now my family is very much a Bona friar family.”

His wife, Yvonne, worked in the St. Bonaventure Friary for 22 years and is now with University Ministries. Their daughter, Devon, and son, Joe, joined her at work in the Friary from the time they were born until they were each three years old. These days, the family can often be found visiting the friary or hosting the friars for barbecues at their home.

One friar whose memory will always linger with Peace is Fr. Gervase White, O.F.M., a 1951 alumnus who served 47 years at St. Bonaventure.

“Fr. Gervase baptized both of our children and was the celebrant at our 25th wedding anniversary in the chapel,” Peace said.

Fr. Gervase was also the one who arranged for a playpen and crib in Yvonne’s office in the Friary for Devon and Joe. In fact, all of the friars helped keep an eye on the kids as their presence in the world was due to much prayer from the friars and 16 years of infertility treatments for Jamie and Yvonne.

“Br. Joe Reilly, the vicar under Fr. Gervase, would pray to St. Gerard, the patron saint of motherhood,” said Peace. “Our son is named after him and the saint.”

Peace would join his family and the friars for lunch in those early years and would take the kids on the mail run with him. He’d strap them into a baby carrier, grab the mail, and go.

“You couldn’t do something like that today,” he said, his smile hinting what good memories those mail runs remain.

His connection with the friars has only grown stronger through the years.

"Jamie has been one of the most faithful and dependable companions of the friars and their mission over the course of several decades,” said Fr. Xavier Seubert, O.F.M., Guardian of the Friary. “His attention to detail and industriousness can always be counted on, even during the most difficult of times and situations."

These days, Peace works hard to keep ahead of the increased demands of the mail. While the use of stamps has decreased, the number of parcels has risen sharply. Mailings of diplomas, admissions materials, fundraising appeals, and athletic tickets take up the bulk of his time, even with enhanced automation.

“If you get behind in this job, you don’t catch up,” Peace said, which is why he gets moving the minute his feet hit the floor in the morning.

He’s on campus by 5:45 a.m. Lunch is usually a quick 15-minute break, only taken when the morning mail run is complete. He walks approximately 15 to 16 miles per day, averaging well over 10,000 steps before noon. As for mail pieces, he estimates that he has delivered tens of thousands.

“I’ve been very lucky,” he said. “In my position, I see and talk with everyone from the president on down. And I see the students through the years, many of whom look me up when they visit after graduating.”

His favorite spaces on campus include the Friary, built in 1986 by P&H Masonry, and the chapel in Doyle. “It’s the most beautiful chapel, so elegant and yet so plain,” he said. His father and an elderly bricklayer from Germany built the reredos, which is the ornamental screen at the back of the altar, with material imported from Italy.

He also loves the brickwork found in Francis Hall.

“Those bricks are from the Hanley brick company founded in the 1800s in Bradford, Pennsylvania. They are coal-fired, which gives them that special coloring,” he said. “The Hanleys called it the ‘Bonaventure Blend,’ and they made it especially for Tom Plassmann.”

The bricks used for Doyle Hall and the Administration Building, he noted, are gas-fired. Each of the buildings feature “cross sets” within the brick design.

“Being connected to St. Bonaventure has tremendously impacted my life,” Peace said. “I just try to do a good job every day, continuing what was started so long ago. What’s happening here today, with the many new academic programs and enhanced learning spaces, it’s all exciting. The dream continues and I’m proud to be part of it.”