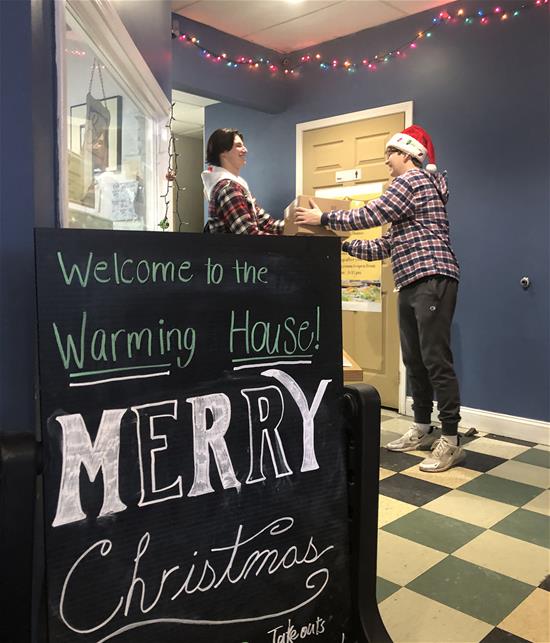 A tradition that’s passed the four-decade mark never gets old.

This year was the 52nd anniversary of the St. Joe’s Food Basket. The Warming House, which started receiving donations from St. Joe’s in 1982, is the primary beneficiary of the Buffalo high school’s annual food drive.

This annual Christmastime donation is the largest donation of non-perishables the Warming House receives each year.

“I’m always amazed at the generosity of their spirit,” said Alice Miller Nation, director of SBU’s Franciscan Center for Social Concern. “This annual donation is so vital to the sustainability of the Warming House.”

More than two dozen young men from St. Joe’s and some Warming House student volunteers from SBU took an hour Tuesday morning to unload boxes and bins containing more than 10,200 items. Afterward, they were treated to lunch in the Warming House.

Betsy Gingerich, wife of SBU President Jeff Gingerich, and Dr. Dave Hilmey, dean of the School of Arts & Sciences and a 1997 St. Joe’s graduate, greeted the students on their arrival.

“I don’t think you realize when you’re having fun working on this project the impact you’re having in this entire community. It’s amazing,” Hilmey said. “What you’re doing feeds people all year long. It makes me proud to be a St. Joe’s alum.”

In 1970, St. Joe’s religion teacher Chuck Ende and a group of St. Joe’s students began collecting food donations for those in need. That first year, the collections fit in the trunk of Ende’s car.

The Warming House is the oldest student-run soup kitchen in the nation.