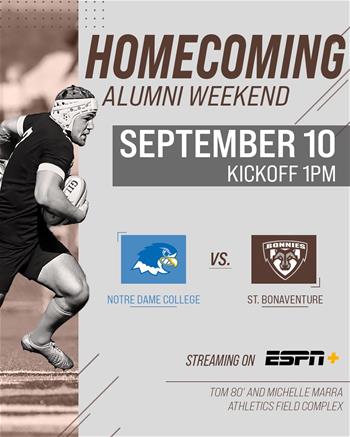 He’s built a winner, a national champion even.

But more important to Tui Osborne, now in his seventh season as St. Bonaventure University’s men’s rugby coach, he’s built a program to sustain that kind of success.

“But I think the biggest change is that everyone has bought in to what we’re trying to do here. Everyone is hungry to learn and work hard.”

The work isn’t happening only during the school year, Osborne said.

“We’ve decided to hold ourselves accountable during the summer so we’re not coming back to school out of shape,” he said. “We don’t have to spend as much time on conditioning so we can work on the playbook.”

That commitment to excellence has made recruiting so much easier.

“We’re at a point now where recruits see St. Bonaventure as a competitor on the national stage and they want to be part of that,” Osborne said. “We’re on the map and they want to come here.”

The Bonnies landed on the national map when they defeated Penn State Dec. 11 to win the National Collegiate Rugby Division I title in Houston. To stay there, they’ll need some of the 28 newcomers to fill the voids left by stalwarts like Cory Ratka and Sebastiano Villani, the No. 2 overall pick in the Major League Rugby draft last month.

Two of the 28 are talented transfers who Osborne hopes can fill those big cleats: Joe Hawthorne, who started his career at SBU and played at perennial national power Life University, and French scrum half Mathéo Lorenzato, a sophomore.

“Joey will be a great addition and Mathéo has a pretty high rugby IQ with great vision and should fill the shoes of Sebastiano pretty well,” said Osborne, who also touted freshmen Matthew Joss of Scotland and Manu Taula from New Zealand.

“We have some depth this year that we haven’t had in the past, especially among our forwards, so we’re looking forward to spelling some of our guys in the front row and giving them some time to rest so they don’t have to play a full 80 minutes,” he said.

The influx of newcomers gelling well with incumbents such as Keelin Coyle and Lucas Otineru, both All-Rugby East selections, Lorenzo Villani and Niku Otineru will determine how much success the Bonnies have on the pitch this season.

The expansion of Rugby East to a two-division, 11-team format will provide added depth to one of the best leagues in the nation, with Army and Navy still considered the best of a strong lot.

“The academies are always strong, but we have to look at all of our opponents as just as important as those two games,” Osborne said. “All the teams in our league have too much talent to overlook anyone.”