Fr. Gregory Boyle, S.J., founder of the largest gang-intervention, rehabilitation, and reentry program in the world, will discuss the transformative work of Homeboy Industries in a September talk at St. Bonaventure University. 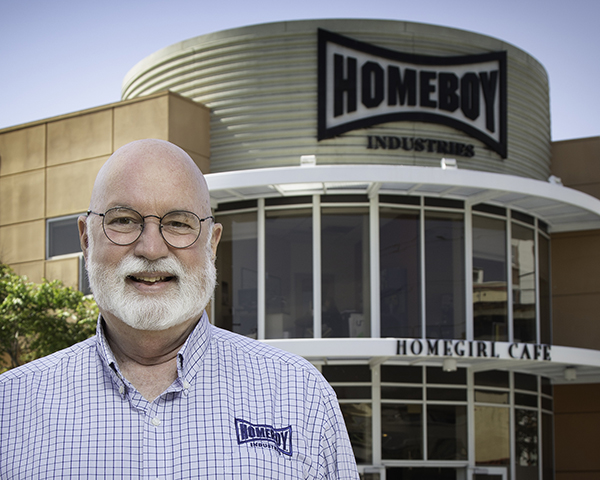 The program will be held at 7 p.m. Wednesday, Sept. 14, in the Reilly Center Arena on campus and is free and open to the public.

Fr. Boyle witnessed the devastating impact of gang violence on his community during the so-called “decade of death” that began in the late 1980s and peaked at 1,000 gang-related killings in 1992. In the face of law enforcement tactics and criminal justice policies of suppression and mass incarceration as the means to end gang violence, he and parish and community members adopted what was a radical approach at the time: Treat gang members as human beings.

In 1988 they started what would eventually become Homeboy Industries, which employs and trains former gang members in a range of social enterprises.

Each year, more than 10,000 former gang members from across Los Angeles come through Homeboy Industries’ doors in an effort to make a positive change. They are welcomed into a community of mutual kinship, love, and a wide variety of services ranging from tattoo removal to anger management and parenting classes.

“Fr. Greg speaks of great compassion and tenderness that were foundational to creating Homeboy Industries,” said Alice Miller Nation, director of the Franciscan Center for Social Concern at St. Bonaventure. “This speaks directly to our university values of compassion, integrity and wisdom.”

Fr. Boyle is the author of the 2010 New York Times bestseller “Tattoos on the Heart: The Power of Boundless Compassion.” His second book, “Barking to the Choir: The Power of Radical Kinship,” was published in 2017. His third book, “The Whole Language: The Power of Extravagant Tenderness,” was released in fall 2021. A short book signing will be held in the Reilly Center following Fr. Boyle’s talk.

Fr. Boyle has received the California Peace Prize and was inducted into the California Hall of Fame. In 2014, President Barack Obama named Fr. Boyle a Champion of Change. He received the University of Notre Dame’s 2017 Laetare Medal, the oldest honor given to American Catholics. Homeboy Industries was the recipient of the 2020 Hilton Humanitarian Prize validating 32 years of Fr. Boyle’s vision and work by the organization.

For more about Fr. Boyle and Homeboy Industries, visit https://homeboyindustries.org/.