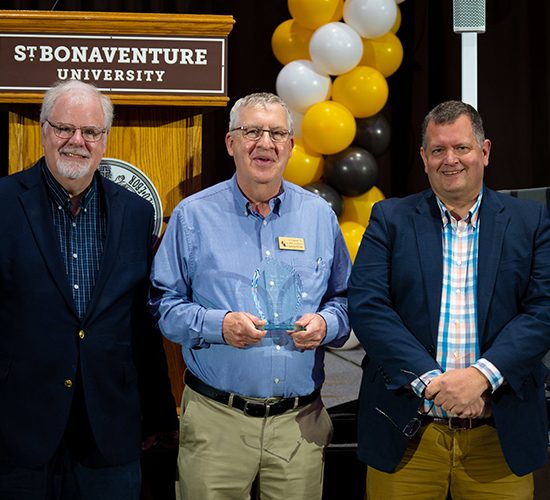 As director of Alumni Services at St. Bonaventure University, Joe Flanagan is usually the person surprising a graduate with the Alumnus or Alumna of the Year Award at the university’s annual Reunion Weekend.
The announcement of the award this past Saturday evening was certainly a surprise to the hundreds of alumni gathered for the Reunion Weekend’s signature event, dinner and dancing in the Reilly Center Arena. And the most wide-eyed person in the hall was Flanagan.
The unsuspecting alumni director, who will retire in July after leading the alumni office for the past 30 years, was honored at the event with presentation of this year’s William P. “Stax” McCarthy Alumnus of the Year Award.
“Joe is as dedicated and loyal to his alma mater as anyone I’ve known and has been a critical part of St. Bonaventure’s success over the decades of his service,” said Bob Van Wicklin, vice president for University Advancement, who, along with acting University President Dr. Joseph Zimmer, presented the award to Flanagan.
“We have been very fortunate to have Joe here for so many productive years,” added Van Wicklin. “He will be truly missed by his Advancement colleagues and so many others from Bona Nation.”
The popular alumni director was emotional as he accepted the award to the cheers of his fellow Bonnies.
“I’m extremely grateful and humbled to receive this award, especially since it’s named after my great friend and former colleague, the late Bill McCarthy of the Class of 1972,” said Flanagan. “It’s been my honor to serve St. Bonaventure’s many loyal and devoted alumni over the years. They made my job easy.”
A native of Binghamton, New York, Flanagan earned a Bachelor of Business Administration degree from St. Bonaventure in 1974 and a Master of Science in counseling from the State University of New York at Oneonta in 1977. He joined St. Bonaventure’s Office of Student Life in 1977, then served as director of Alumni Services at SBU from 1979-1983.
Following stints as director of Alumni Affairs at Broome Community College (1984-1988) and director of Alumni Affairs at the State University College at Buffalo (1988-1992), Flanagan returned to St. Bonaventure as director of Alumni Services in 1992 and has led the university’s more than 31,000 alumni ever since.
He was instrumental in reorganizing the university’s National Alumni Association Board, organizing on- and off-campus alumni programming, and expanding alumni chapters across the United States.
Flanagan is the founder and current chair of the Western New York Alumni Directors and a member of the St. Vincent DePaul Society. Formerly, he was an adjunct instructor of business at Broome Community College and served for a year as director of education for the Tompkins County Council on Alcoholism in Ithaca, New York. He is also a retired NCAA women’s basketball official.
Flanagan and his wife, the former Mary Rosinski, a 1975 SBU graduate, are parishioners at Saints Peter & Paul Roman Catholic Church in Hamburg, where they serve as Eucharistic ministers. They have two married children, daughter Adele and son Joe, ’13, and two grandchildren.

In retirement, Flanagan will continue his role as programming coordinator for “Mountain on the Road” alumni retreats, popular visits to alumni chapters around the country by university affiliated Franciscan friars from Mt. Irenaeus, a Franciscan mountain community in Allegany County.

______________
About the University: The nation’s first Franciscan university, St. Bonaventure University is a community committed to transforming the lives of our students inside and outside the classroom, inspiring in them a lifelong commitment to service and citizenship. St. Bonaventure was named the #5 regional university value in the North in U.S. News and World Report’s 2022 college rankings edition.
Share on Facebook
Share on Twitter
Share by E-Mail
All Rights Reserved © 2022