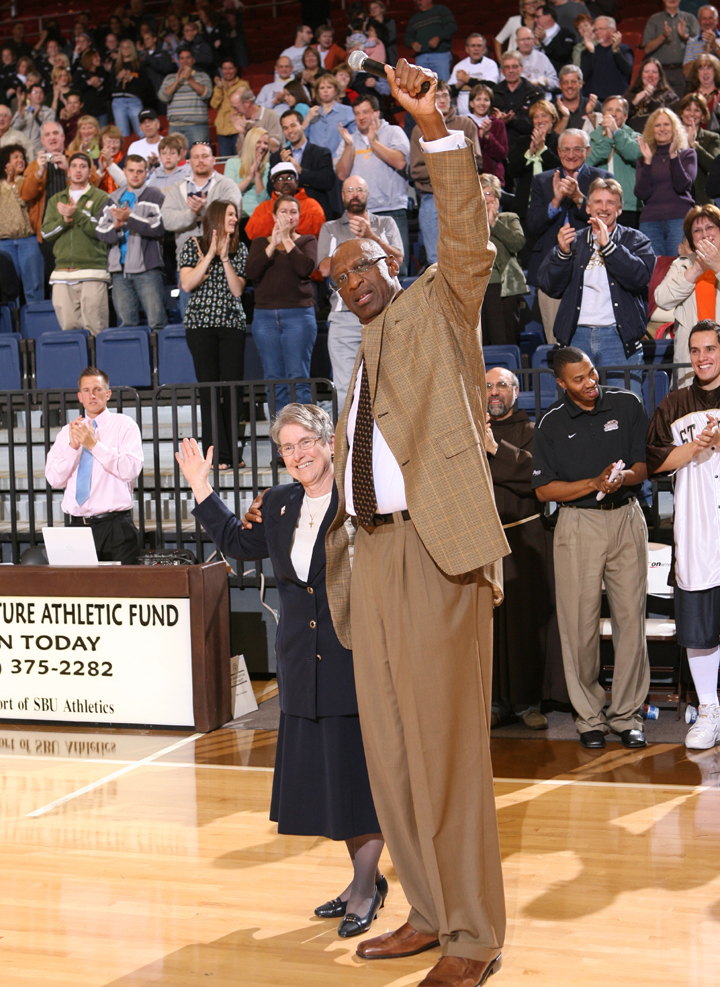 Bob Lanier, the greatest basketball player in St. Bonaventure history, died Tuesday (May 10, 2022) surrounded by family in Arizona. He was 73.

The Reilly Center Arena court where the Bonnies have played since 1966 was named after Lanier in 2007.

“The spirit of St. Bonaventure is bigger than any one man, but no singular soul in 164 years has ever brought more honor, dignity, glory and love to bear at Bona’s than Bob Lanier,” said Mike Vaccaro, ’89, New York Post columnist and the foremost historian on Bonnies basketball.

“Bob transcended race, united a campus and, by the way, was one of the best basketball players who ever lived. He will be synonymous with St. Bonaventure eternally.”

But the All-American center suffered a serious knee injury in the 1970 East Regional title win over Villanova and the short-handed Bonnies couldn’t overcome his absence in a 91-83 loss to Jacksonville in the national semifinal.

“Bob Lanier was a Hall of Fame player and among the most talented centers in the history of the NBA, but his impact on the league went far beyond what he accomplished on the court. For more than 30 years, Bob served as our global ambassador and as a special assistant to David Stern and then me, traveling the world to teach the game’s values and make a positive impact on young people everywhere.

“It was a labor of love for Bob, who was one of the kindest and most genuine people I have ever been around. His enormous influence on the NBA was also seen during his time as President of the National Basketball Players Association, where he played a key role in the negotiation of a game-changing collective bargaining agreement.”

“I learned so much from Bob by simply watching how he connected with people. He was a close friend who I will miss dearly, as will so many of his colleagues across the NBA who were inspired by his generosity. We send our deepest condolences to Bob’s family and friends.”

Lanier was awarded an honorary doctorate by his alma mater in 1985 and the Gaudete Medal, the university’s highest service award, in 2004.

“I was lucky enough to be able to interview Bob at length in 2007 and what impressed me more than anything was that he was as interested in knowing about me as I was in knowing more about him. He was such a kind and genuine man,” said Tom Missel, SBU's chief communications officer.

“Later that day, after the court dedication, it was incredible seeing how willing he was to not only sign anything and everything people threw at him, but to talk to fans who wanted to chat, many of whom he remembered from almost 40 years ago."

In an interview on the day of the Reilly Center Arena floor dedication in 2007, Lanier wept recalling how devastated he was not being able to play in the Final Four.

“We were kind of warriors … in this trench together, and we had one focus: to win an NCAA title. I don’t mean this to be trite: We honestly loved each other and would go through the wall for each other,” Lanier said, recalling the preseason goal the team had set for itself over beers and burgers at The Burton.

“We get to the tournament and we were just rolling through people. And then the worst thing in the world that could happen (vs. Villanova) — Billy’s (Kalbaugh) going down on a break, I turn around, and boom, a guy falls into my knee. I didn’t even know at the time I tore my knee up. But when I ran back down the court and tried to pivot, my leg collapsed. I didn’t know at the time I had torn my MCL.

“It hurt me to my heart that my guys were going (to the tourney) without me,” Lanier said, wiping tears from his cheek. “It’s just that you’re not there to help them. I was in a hospital bed and I watched them bust their butts against Artis (Gilmore) and Pembrook (Burrows) and I know that I could have helped them overcome that. They made me so proud.

“I think about the lasting memories and the lasting friendships I have to this day because of those guys I was in a trench with for so long.”

Years later, Lanier was instrumental in bringing the Final Four team back to campus every few years for an under-the-radar reunion few people knew was happening.

Recruited out of Buffalo’s Bennett High School by Coach Larry Weise, Lanier grew as a freshman into his legendary size-22 sneakers, leading St. Bonaventure back into the national spotlight during his sophomore season in 1967-68. 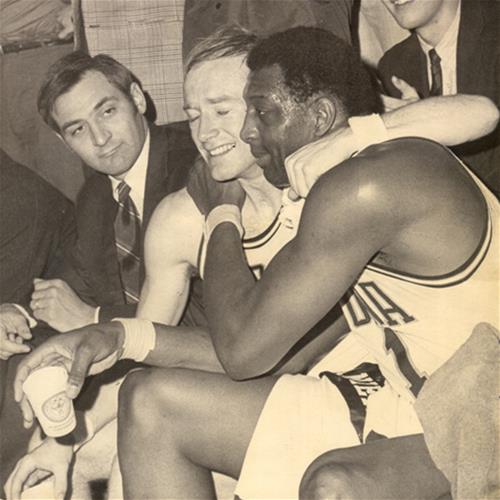 In his first varsity season, the 6-11 Lanier and his teammates — the legendary Iron Man Five of Lanier, Bill Butler, Billy Kalbaugh, John Hayes and Jim Satalin — put together an undefeated regular season and a No. 3 national ranking before losing to North Carolina in the second round of the NCAA tourney. Lanier averaged 26.2 points and 15.6 rebounds per game.

A silky-smooth left-hander with a lethal hook shot and mid-range jumper, Lanier averaged 27.2 points and 15.5 rebounds a game his junior year and 29.1 points and 16 rebounds his senior season. He was a consensus All-American each season.

In 52 years, only his career points record has been surpassed — by three men who played 29, 37 and 48 more games than Lanier did, when freshmen were allowed to play varsity (after 1972) and schedules grew larger.

Lanier was on campus Dec. 7, 2019, for the 100th anniversary of Bonnies basketball and regaled the crowd at the arena for that day's game and later that night at the anniversary gala with tales of the Final Four team.

The MVP of the 1974 NBA All-Star game, Lanier had his No. 16 jersey retired by the Pistons and Bucks, to whom Lanier was traded in 1980. Lanier was inducted into the Naismith Memorial Basketball Hall of Fame in 1992.

Since 2005, Lanier had been the NBA Cares Global Ambassador, routinely working with youth-serving programs that support education, youth, family development and health-related causes.

Lanier was a longtime spokesperson and chairman of the NBA’s “Stay in School” program, later renamed “Read to Achieve,” a year-round initiative supported by all 30 NBA teams, 13 WNBA teams, and 6 NBDL teams that promotes the value of reading and online literacy and encourages families and adults to read regularly with young children.

The Bob Lanier Center for Educational, Physical and Cultural Development is a children’s and youth service in Buffalo, founded in 1994.