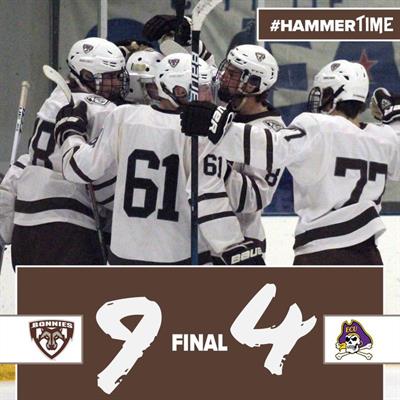 Connor Yuhas scored midway through the second period to break a 3-3 tie and the Bonnies scored five of the next six goals, including the only three of the third period to break open the game.

Mike Rappa, Meggo and Connor O’Brien scored in a two-minute span of the first period to take the Bonnies, now winners of 13 in a row, to a 3-0 lead, but the Pirates scored in the dying seconds of the period and tallied twice early in the second to tie the game.

Mitchell Marsh and Owen Hughes added goals in the third for St. Bonaventure.

The Bonnies, who outshot East Carolina, 46-35, got 31 saves from Nick Filipowicz.

For a fee, the games can be livestreamed at https://www.bdehockey.com/home-chf.php. Packages are available for four-hour increments, all of pool play, all of medal-round play, and the entire tournament.

The team in each of the eight pools with the most points — teams earn two points for a win and one for a tie — will advance to the quarterfinals on Monday after three days of round-robin pool play. Ties for first in the pools will be broken by head-to-head results, then by fewest goals allowed, and then, if still tied, by goal differential.

Quarterfinals, semifinals and title/consolation games are scheduled for Monday, Tuesday and Wednesday.