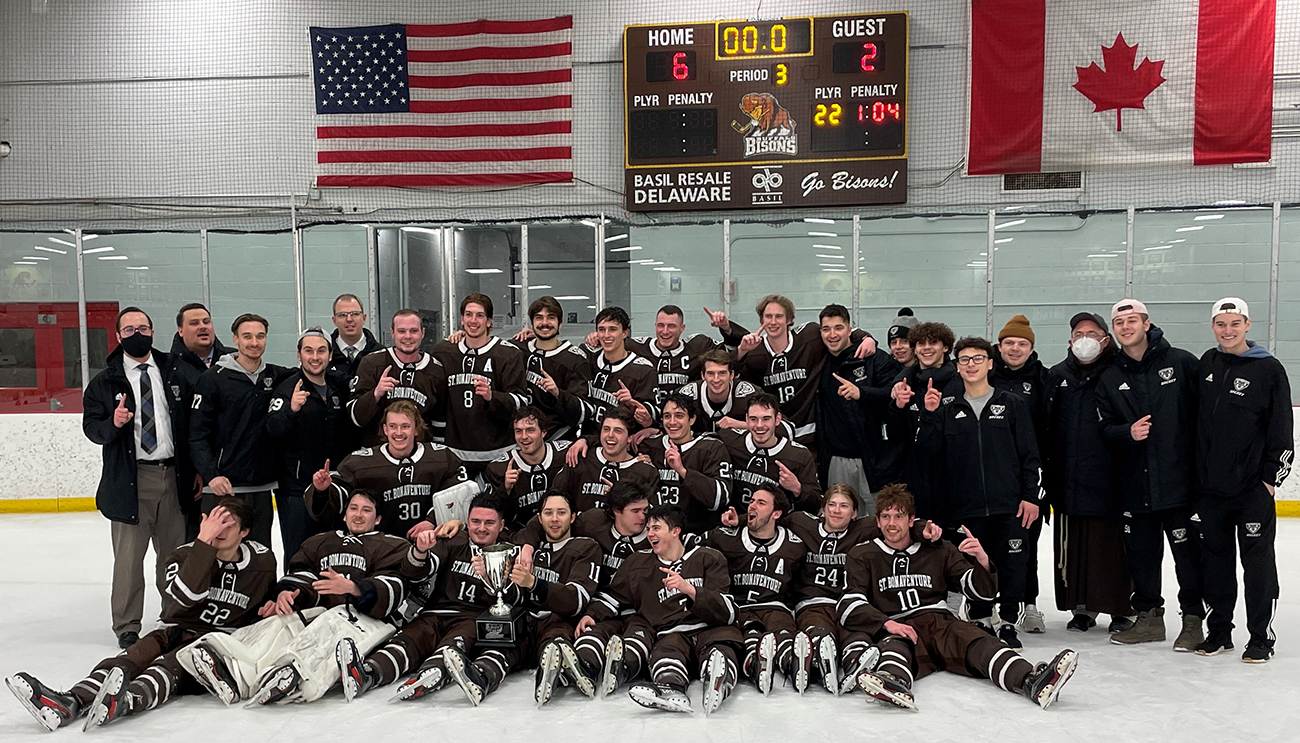 The win was the Bonnies’ 12th straight and capped a thrilling weekend at the North Buffalo Ice Rink.

On Saturday, St. Bonaventure (17-2) rallied from a 4-1 first-period deficit and defeated Cortland State, 7-6, on Owen Hughes’ overtime goal in a tourney semifinal. The Bonnies beat Niagara, 3-2, in the quarterfinals Feb. 21 and Alfred State, 4-1, in the first round of the tournament Feb. 19.

The Bonnies, who lost 5-4 and 6-4 to the Bengals for their only losses of the regular season, jumped on Buff State early thanks to a game-time decision by coach Taylor Rosenberg.

“We just didn’t bring our ‘A’ game either time so we really wanted to set the tone early today. So we sent out three guys — Connor O’Brien, Jimmy Johnson and Sam Cichowski — who aren’t even a line, but we did it because they are three of our best forecheckers,” Rosenberg said. “We put the pressure on them right away and when we made a quick line change, Mason Meggo scored less than a minute into the game.”

Nick Filipowicz was magnificent in goal, turning away the Bengals time and again while the Bonnies were opportunistic in the offensive zone, taking advantage of several Buff State miscues.

The pivotal moment in the game came midway through the second period. Filipowicz made a remarkable save with the Bonnies up 2-0, and less than 30 seconds later, Michael Rappa scored after a Bengal giveaway to put SBU up 3-0.

“Nick was outstanding and really kept us in it for a while when Buff State started bouncing back,” Rosenberg said.

Buff State scored with under 30 seconds left in the second period to make it 3-1, but goals by Ray Werner and Jack Kernitz in the third put the game out of reach. Kernitz was awarded an empty-net goal to make it 6-2 in the final minute when he was dragged down on a breakaway with the Buff State goalie pulled.

Hughes, who was named the tournament MVP, scored not long after Meggo in the first period to stake the Bonnies to an early 2-0 lead.

“Something we’ve prided ourselves on all season is having a lockdown defense,” said senior captain David Stutz. “This team has a lot of heart.”

Ranked 9th in the most recent Collegiate Hockey Federation power rankings, the Bonnies next play at the CHF Federation Cup March 18-23 at West Chester, Pa. SBU had earned a berth in the 32-team tournament before this weekend’s action. It’s the second straight Federation Cup berth for the Bonnies.