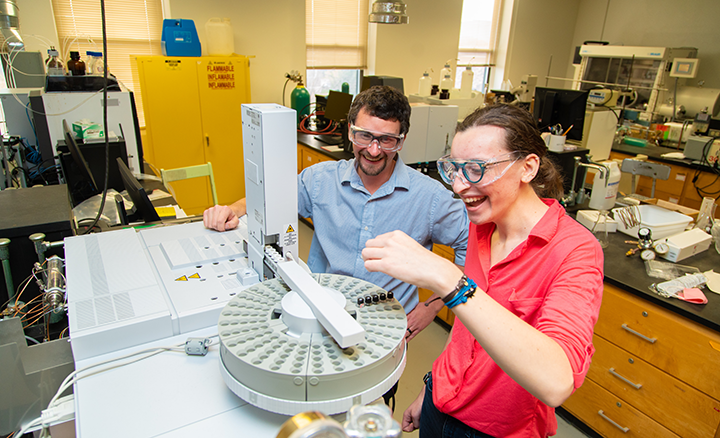 As a chemist, Dr. Scott Simpson is passionate about solving a problem that has a major impact across the globe and pushing scientific research at St. Bonaventure University further.

A National Science Foundation (NSF) grant for $544,892 will help him pursue both of those goals. Simpson, an associate professor of chemistry at St. Bonaventure, has been awarded a prestigious NSF CAREER grant for his research proposal titled “Investigating the Molecular Corking Effect for Potential Hydrogen Storage.” This award is considered the most prestigious award given by the NSF to early-career faculty.

Hydrogen is a versatile, energy-dense gas that can be used as an alternative to fossil fuels in many applications, including transportation and power generation. However, widespread adoption of hydrogen fuels is limited, in part, by the inability to safely store and transport hydrogen gas outside of carefully controlled industrial environments.

“Dr. Simpson’s CAREER Award is remarkable and his research on molecular corking has huge implications in hydrogen fuel and storage research,” said Dr. Dave Hilmey, acting provost and vice president for Academic Affairs at St. Bonaventure. “This is an incredibly prestigious NSF award that benefits the university, our regional community, and the chemistry field – and we are delighted that Dr. Simpson has been recognized for the world-class research that he does.”

The CAREER awards from the NSF recognize early career professionals with promising research who have the potential to serve as academic role models and lead their respective fields. 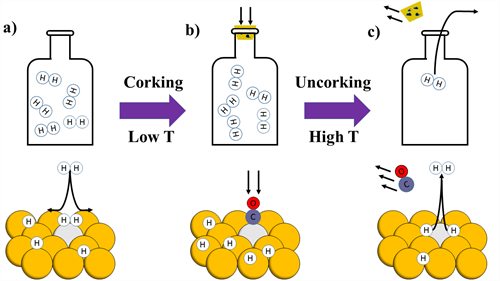 The five-year grant will also provide funding for a postdoctoral research fellow, stipends for undergraduate research students, and new computer servers for computations. It is Simpson’s goal that some of the collaborating students will begin to see scientific research as a career pathway.

“I’m in the business of trying to get people careers. That is what is most important to me, to make sure my students get a job,” he said.

“When I was a college student, I had an opportunity to be an assistant to a researcher. It helped me out a ton in my career,” he said.

An educational component of the project will have undergraduate researchers developing and testing a number of practical quantum chemical exercises, which will then be integrated into St. Bonaventure’s laboratory curriculum and be available to other institutions that don’t have a computational chemist on staff.

Simpson began studying how molecules interact with surfaces when he was pursuing his Ph.D.  As he continued his research, Simpson began to look into trapping hydrogen on surfaces. Learning how to store hydrogen safely could be one round in the fight against climate change and the energy crisis.

“If we ever want to utilize hydrogen, we have to find safe ways to contain it,” Simpson said. “We’re all watching the price of gas tick up. How are we going to beat that? I think this is a way to solve that problem.”

Growing up in Allegany, Simpson was excited to return to the area in fall 2016 and join the St. Bonaventure University faculty. He is a graduate of Allegany-Limestone Central School and was a member of the Olean-Allegany swim team in high school.

His family also has strong ties to SBU.

“My mother, Debra Simpson, my aunt, Vickie Stayer, one of my cousins, Kelly Rzepka, and my wife, Lindsay Simpson, are all graduates of SBU. My grandfather Eugene Rzepka was a butcher at Hickey Dining Hall from the ’70s to the ’90s. My mom and dad were married on campus and had their reception in the Rathskeller,” said Simpson.

Simpson’s excellence as an instructor and researcher has been recognized at SBU through his receipt of the 2019 Junior Faculty Award for Professional Excellence, an award given to a pre-tenure faculty member only once every three years.

He has received a number of internal grants as well as two national awards. In 2018, Simpson received a $55,000 research grant from the American Chemical Society’s Petroleum Research Fund. The goal of that research is to develop heterogeneous catalysts to produce chemicals in a more inexpensive way. Additionally, a $119,373 NSF grant is supporting Simpson’s research group to identify perfluoroalkyl and polyfluoroalkyl substances, known as PFASs, which are compounds that are emerging environmental contaminants.

“Scott represents all the aspects of an outstanding teacher-scholar at Bonaventure – an amazing teacher, researcher, and member of our Bona’s community,” Hilmey said. “This award truly speaks to what Dr. Simpson brings to SBU and we are thrilled for his accomplishments.”

Learn more about SBU's Department of Chemistry at www.sbu.edu/chemistry.