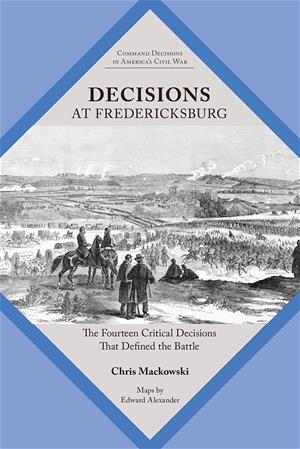 Chris Mackowski, professor in the Jandoli School of Communication at St. Bonaventure University, has published a new book on the Civil War Battle of Fredericksburg.

The book, “Decisions at Fredericksburg: The Fourteen Critical Decisions That Defined the Battle,” is published by the University of Tennessee Press as part of its Command Decisions in America’s Civil War series.

The battle of Fredericksburg took place Dec. 11-13, 1862, on the eve of President Lincoln’s Emancipation Proclamation, set to go into effect on Jan. 1, 1863. The federal government needed a battlefield victory to help give teeth to the proclamation.

Instead, federal commander Maj. Gen. Ambrose Burnside led the Army of the Potomac to its most lopsided loss of the war, sustaining nearly 13,000 casualties compared to only around 5,000 casualties for Gen. Robert E. Lee’s Army of Northern Virginia.

“Burnside has been ridiculed for Fredericksburg for nearly 160 years,” Mackowski says. “He bears the blame because he was the army commander, but in fact, he knew he was looking at a set of bad options and was forced to move ahead because of political pressure. A couple subordinates failed him in key ways, too. There are a lot of misconceptions around the whole battle.”

“Decisions at Fredericksburg” looks at the 14 critical decisions by leaders on both sides, north and south, that shaped the action. As defined by series editors Matt Spruill and Larry Peterson, “A critical decision is a decision of such magnitude that once it was made, it affected the flow and sequence of events of a battle or campaign from that point on.”

Critical decisions cover the entire spectrum of war. “They can occur on the strategic, operational, and tactical levels or within organizational or logistical structures. They can also involve personnel,” the editors write.

Historian A. Wilson Greene said in his review of Mackowski’s book, “The author has done an outstanding job of unpacking those decisions and making the case for their centrality to the campaign’s outcome.” Greene also said, “The author possesses solid knowledge of his subject matter … and employs lively writing that avoids the dry prose that often infects such analytical studies.”

Mackowski has taught at St. Bonaventure in the Jandoli School since the fall of 2000. His is the co-founder of Emerging Civil War, a consortium of public historians, and he is the managing editor of the Emerging Civil War book series, published by Savas Beatie, LLC.

Mackowski is also historian-in-residence at Stevenson Ridge, a historic property on the Spotsylvania battlefield in central Virginia. He has worked as a historian for the National Park Service at Fredericksburg & Spotsylvania National Military Park, where he gives tours at four major Civil War battlefields (Fredericksburg, Chancellorsville, Wilderness, and Spotsylvania), as well as at the building where Stonewall Jackson died.

He has authored or co-authored 15 books on the Civil War, and his articles have appeared in all the major Civil War magazines. Mackowski serves as vice president on the board of directors for the Central Virginia Battlefields Trust, a preservation organization based in Fredericksburg, Virginia, and also serves on the advisory board of the Civil War Roundtable Congress and the Brunswick (NC) Civil War Roundtable, the largest in the country.