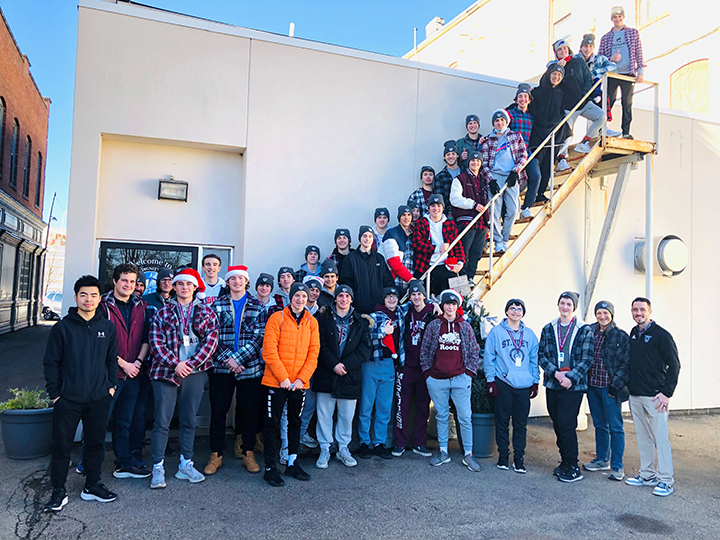 They are the gifts who keep on giving.

For the 40th year in a row, students from St. Joseph’s Collegiate Institute on Friday delivered a truckload of non-perishable food items and paper products to the Warming House, St. Bonaventure University’s soup kitchen on North Union Street in Olean.

This year was the 51st anniversary of the St. Joe’s Food Basket. The Warming House, which started receiving donations from St. Joe’s in 1982, is the primary beneficiary of the Buffalo high school’s annual food drive.

This annual Christmastime donation is the largest donation of non-perishables the Warming House receives each year.

“I’m always amazed at the generosity of their spirit,” said Alice Miller Nation, director of SBU’s Franciscan Center for Social Concern. “This annual donation is so vital to the sustainability of the Warming House.”

Almost three dozen young men from St. Joe’s took less than an hour Friday morning to unload boxes containing more than 8,200 items. Afterward, they were treated to lunch in the parking lot behind the Warming House.

Dr. Joseph Zimmer, acting president, and Dr. Dave Hilmey, acting provost and vice president for Academic Affairs, greeted and thanked the students on their arrival. Both men are graduates of St. Joe’s. 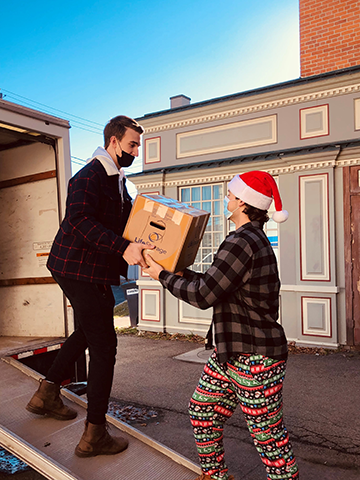 “When I was at St. Joe’s we were sending our primary donation to Albion. The year after I graduated (1981), the switch was made to the Warming House and I’m so grateful that the Food Basket has been coming here ever since,” Zimmer said.

In 1970, St. Joe’s religion teacher Chuck Ende and a group of St. Joe’s students began collecting food donations for those in need. That first year, the collections fit in the trunk of Ende’s car.

For the second year, St. Joe’s asked its alumni to assist in the collection by either dropping the items off at the school, or utilizing an Amazon Wish List to send boxes of non-perishables directly to the Warming House to supplement what the students delivered Friday.

The Warming House is the oldest student-run soup kitchen in the nation.