For more than 36 years, Kathy Boser, administrative assistant in the Jandoli School of Communication, has championed the strong sense of community found at St. Bonaventure University. 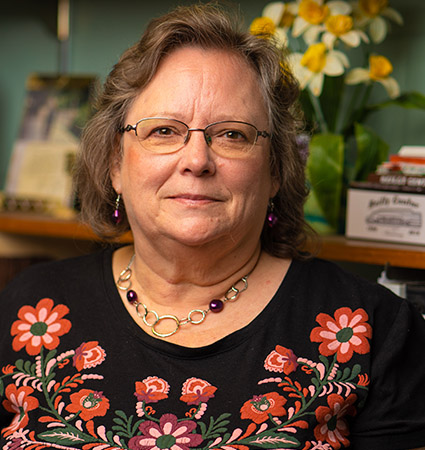 Throughout her long career, she has served under four deans, welcomed dozens of faculty members and greeted hundreds of students — all while raising a family in nearby Allegany, New York, with her husband of 48 years.

“Her ability to build connections and to think about the values of the school and what’s really important go well beyond her job duties,” said Aaron Chimbel, dean of the Jandoli School of Communication.

If you attended the Jandoli School since the mid-1980s, chances are Kathy connected with you in some way. Co-workers and students describe her role in the school as the glue that keeps everything and everyone together.

She also faces every challenge of the workday head-on and finds a solution—from the simplest of daily problems such as a printer malfunctioning to complex issues like employee compensation.

“Kathy has been a real advocate for staff at the university,” said Chimbel, noting that she has advocated for the professional success of her colleagues. “Throughout the years she has worked to improve the lives of staff members.”

In 1998, she served on the retirement subcommittee that gained approval for staff members to receive TIAA-CREF retirement benefits. She has served on the staff affairs committee for more than 20 years, and this past May received the Advocacy Award, presented to a staff member who has contributed to improving the work environment. 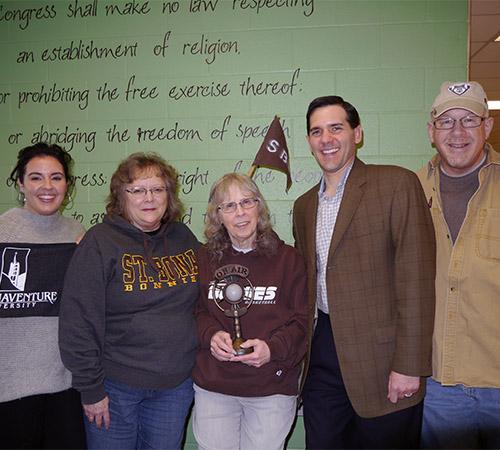 “She's the one very often who will step forward and say here’s a point where the staff need a voice in this process,” said Carole McNall, assistant professor of journalism and member of the Class of 1975. The two have worked together for 18 years and have been friends for even longer.

She also nourishes the legendary Bonaventure community feeling throughout the Jandoli office. When McNall’s husband passed away last year, Kathy was there to lend whatever support was needed.

Dean Chimbel perhaps sums it up best: “She is a really good example of what makes St. Bonaventure special. She has a specific job but she goes well beyond that job every day because she cares so much about the university, the Jandoli School, and most importantly the people.”

Kathy recently reflected on her time at St. Bonaventure, sharing her thoughts in the following Q&A.

What year did you begin working with the university and how did you land your job with the Jandoli School? 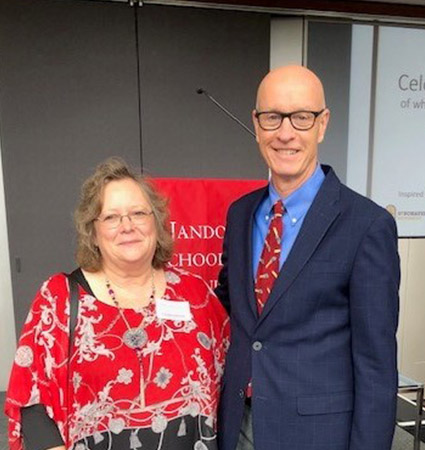 offered the job earlier, but was finishing a three-month clerical upgrade program at Olean Business Institute (where I had graduated from in 1973). Dr. Mary Hamilton selected to hire me and felt that it was important for me to be able to finish my program before beginning work at the university. The Jandoli School (which was then a department) had gone without an administrative assistant for ten years, completely relying on student staff. Mary was a faculty member of the Jandoli School and had just begun the position as department chair a short time earlier. Thankfully she had confidence I was the right person and worth holding the position open for until I would be available (which would allow me to finish my coursework).

Another interesting aspect about my hire was that I partially credit Lee Coppola, our former dean, for that opportunity. Once Dr. Hamilton took over as department chair, she met with the Advisory Council to the President on Journalism and Mass Communication of which Lee Coppola was a member. Some suggestions had been made and Dr. Hamilton said that she wouldn’t be able to act on them without having the support of an administrative assistant. Lee and a couple other council members then went to the president of the university to seek permission for Mary to be able to hire a full-time administrative assistant. The president agreed, and a full-time, nine-month position was created (that eventually turned into a 12-month position). Consequently, when Lee became dean in the early 1990s and I then became his administrative assistant, it was like he had helped set this in place years before.

You worked for a while with Dr. Jandoli. What do you remember best about him and what did you most admire about him? 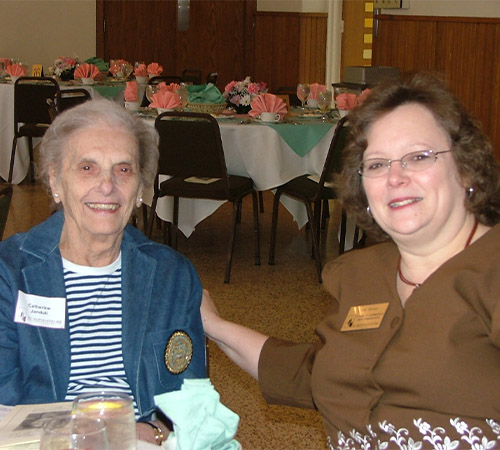 Shortly after I started my position, I was approached by one of Dr. Jandoli’s students asking if I would mind being interviewed for a story they were doing for a class assignment for Dr. Jandoli. I agreed and didn’t give it much thought until Dr. Jandoli presented me a copy of the article a short time thereafter. As many of his former students would tell you, it was filled with red ink corrections/comments. I learned a lot about his passion for helping the students hone their writing and interviewing skills from that paper. I also learned a bit of what he thought about me in some of the comments. (It was something I tucked away for safekeeping and this prompts me to now wonder where I placed that.)

His students/alumni seemed to take the place of him never having children of his own and he took pride in their every accomplishment whether personal/professional. There were countless alumni with whom he corresponded through the years (with many copies still stored in our alumni files).

One of the things I admired most of Dr. Jandoli was that he seemingly established the “family” emphasis in our work environment that I’m pleased to say it is still maintained by those who have led our program since he founded it.

What are some ways graduates stay in touch with you? Approximately how many do you think you’ve been in touch with through the years?

There are many ways that graduates remain in touch with me, via phone, email and primarily now social media. As far as how many I’ve been in touch with through the years, it would literally be hundreds. In the beginning, prompted by our annual correspondence or newsletter, alumni would often send along updates along with notes or I would meet them at various events. Since that time, graduates I’ve known as students have also kept in touch keeping me apprised of their various milestones (work, life, family). Many of those who attended since I first started working here now have children of their own attending college. (Including Lee Coppola who now has a granddaughter, whom I’ve known since birth, and started St. Bonaventure this fall). 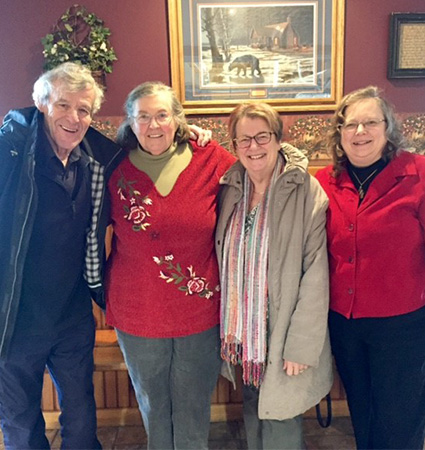 What about former faculty members—do you get together with any, and if so how and where?

Yes, I’m still in touch with former faculty. If they are still in the area, we may meet for lunch or at a gathering. If not from the area, it will be dependent on whether we can meet when traveling, such as with Alan and Barbara Mackenzie from the UK. Typically they will travel to the U.S. annually and we will always meet for breakfast at Sprague’s when they return. As far as Mary Hamilton, we have been going together on a weeklong vacation retreat to Southern Pennsylvania every summer for the past thirteen years. (We only missed one year, which was last year due to Covid.) We also regularly meet throughout the year for lunch, movies, etc.

Has working among friars/for a school that embraces Franciscan values brought a sense of awareness to you that you might not have had before?

I had no real connection with the friars or knowledge of Franciscan values before I began working at the university. I have been fortunate to have worked directly with friars in our programs as interns, faculty members and directors, and some even began as students since I began working at the university. As a result, it has created some lifelong friendships. Although I am not Catholic, I discovered we had much in common and some of the same values. I’m extremely grateful for the lasting friendships and support I’ve received directly from the friars throughout my time here at the university.

Throughout your many years working at the university, what are your favorite memories or moments? 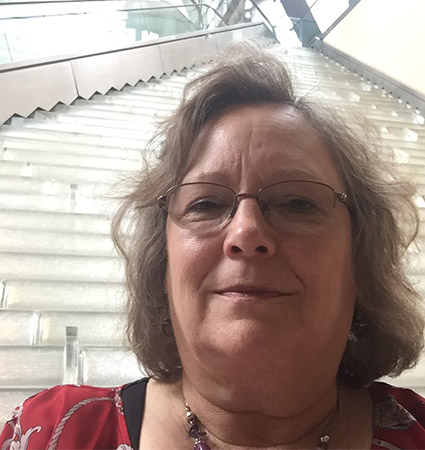 My favorite memories or moments at the university have been the connections I have made with employees, students, guests, friars and alumni through the years through events arranged by the Jandoli School of Communication or the university and courses I’ve participated in.

Events that stand out are the annual Mark Hellinger Awards (at the Plaza Hotel and Hearst Tower in New York City, and the Press Club in Washington, D.C.), St. Bonaventure University Annual Family Picnic, Quick Arts Center Family Fun Day and of course, Bona’s Basketball. Of the courses I’ve been able to take, the one that stands out the most was the Imaging Journaling Course offered by Constance Pierce. If memory serves correct, I was able to take two courses from her that were offered specifically for faculty/staff. I learned a lot from her how imaging and writing connect and how both can be meditative and healing.

What have been the most interesting moments and how have they impacted you?

I feel some of the most interesting moments have been during through periods of trials and seeing how we as a department/school or the university pulls through. It’s been a good experience for me in my personal life as well as public committee involvement applying some of those same values and commitments.

How much has the university changed since you began and what are your opinions on it?

The university has changed a lot through the years, through different presidents, different governance structures, but I’d like to think it’s all been for the better of the university, its students, faculty and staff. As a staff member, during my time here, I’ve seen the staff being given more recognition now than ever before, through formation of staff affairs committee and even the introduction of staff awards in 2020 and with additional benefits.

What advice would you give to St. Bonaventure students and staff?

My advice to students and staff would be to become involved at the university. Step out of your comfort zone, serve on committees, volunteer and participate in events. Both you and the community will benefit by your having done so.

What do you love the most about St. Bonaventure?

The community. Despite the fact that the people in the community may change and that we come from different backgrounds, different interests, customs and goals, we all have a special bond that lasts throughout our lives even once we leave the university.