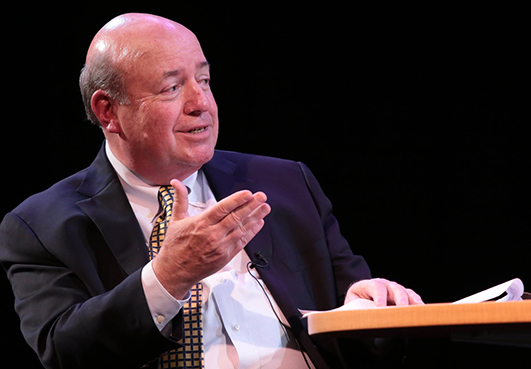 The presentation, titled “Getting Back to Business: Challenges in the Post-Pandemic World,” will begin at 4:30 p.m. on Thursday, Oct. 7, in the Rigas Family Theater of the Regina A. Quick Center for the Arts on the St. Bonaventure campus.

The event will be livestreamed at https://video.ibm.com/channel/st-bonaventure-university-live-stream.

“This year’s lecture is timely as it directly addresses the impact of COVID-19 on the business realm,” said Dr. Matrecia James, dean of the School of Business. “Students and members of the local community are invited to join in. Dick Kearns and his Globetrotter Team always deliver a lively and informative lecture. We are thrilled to have them back on campus.”

Dick Kearns ‘72 serves on the Board of Directors of Zurich North America Insurance Co. From 2002 until 2011, he was based in Switzerland as Zurich’s Group Chief Administrative Officer and member of the Group Management Board. Prior to joining Zurich, he spent 30 years at PwC in senior roles, including as Vice Chairman.

Dick served as a St Bonaventure University Trustee from 2000 to 2009. He is a recipient of the University’s Gaudete Medal, 2017 Alumnus of the Year, and was awarded an Honorary Doctorate in 2019. He received a BBA in Accounting and is a CPA.

Joining Kearns on the panel will be:

Brian Kearns
Vice President & CFO, BH Aircraft Co.
Kearns is CFO and a board director of B.H. Aircraft, a leading manufacturing company serving the aerospace and defense industries. He began his career with EY, where he spent 15 years in various audit and consulting roles, including multiple international assignments serving global clients throughout Europe and the Middle East. He also served in financial positions at Goldman Sachs and Pall Corporation. He received a BS in Accounting from Providence College and is a CPA.

Donard P. Gaynor
Chairman, Glanbia, Plc.
Gaynor is Group Chairman and Non-Executive Director of Glanbia, an Irish based global nutrition group with operations in 32 countries. He previously served in senior executive positions at Beam Global Spirits, Seagrams and PwC. Gaynor serves on the boards of other internationally based companies and has held global roles throughout his career in the U.S., Europe, and Asia Pacific. He is both a CPA and Chartered Accountant.

Thomas McCarthy, ’10, ’13
Hotel Sales Executive, W Nashville
McCarthy is a Hotel Sales Executive at W Nashville. He has worked for Marriott in a series of sales roles, including at their Ritz Carlton brand, since joining the company in 2013. McCarthy chairs One Marriott, an associate network fostering an open workplace of diversity and authenticity. A St. Bonaventure graduate, he received a BBA in Marketing in 2010 and an MBA in 2013. He also worked as an admissions counselor while pursuing his graduate degree.


Jennifer Torneden
Senior Vice President, Legal & General American Insurance
Before joining LGA in 2020, Torneden served in global and national leadership roles at Aon and Zurich Insurance. She lived and worked in Switzerland for eight years. Torneden received the 2019 Women to Watch Award from Business Insurance Magazine and holds a BS in Finance from George Mason University and an MBA from Columbia University. She is the executive sponsor of LGA’s Diversity & Inclusion initiatives, designed to accelerate change among executives, employees, and customers.

The event is free and open to the public. Kearns and his team welcome local businesspeople to attend.