Remembering Fr. Mychal Judge and the early moments of 9/11

The late Br. F. Edward Coughlin, O.F.M., ’70, former vice president for Franciscan mission at St. Bonaventure University, was serving as provincial secretary of Holy Name Province and based in New York City on Sept. 11, 2001. His reflection about Fr. Mychal Judge, O.F.M., ’57, a fellow Franciscan friar, originally appeared in the province’s newsletter on the 10th anniversary of the terrorist attacks. Fr. Mychal was serving as chaplain to the New York City Fire Department when he was killed, becoming the first certified fatality of the Sept. 11 attacks.

Sept. 11, 2001, began as the perfect New York day — bright sun, deep blue sky. It was Mychal Judge’s custom at morning prayers in the lower church to pray for the safety of those who might be living in or visiting New York each day. Ironically, this was one of the rare days when he was not present to offer that prayer.

There are so many moments and images that flash in my mind at the most unexpected times. Breakfast after morning prayers was particularly high spirited and jovial until Brian Carroll returned from 6th Avenue with the news of what was happening. He and thousands of others on the street had heard the plane fly over and watched it fly directly into the building. His question: Has anyone seen Mychal?

Walking Downtown
Later that morning the Archdiocese called both the Provincial Office and the Friary to advise us that Mychal had been killed and that his body had been taken to St. Peter’s Church. I went to find then guardian Peter Brophy, OFM, who was on his way to find me.

We meet on the street and neither of us had a clue what we ought to do or could do; we simply knew that we could not leave Mychal’s body in the church. We also knew we would need our habits, passports I think we called them that day, before we went to the firehouse on 31st St. to see what we might be able to do. The captain knew before we arrived that Mychal had died and quickly offered to take us to the 19th St. station, a command post. We walked down 7th Ave. and passed a seemingly endless stream of people, covered in dust and debris, heading uptown and hoping to find a way out of the chaos. 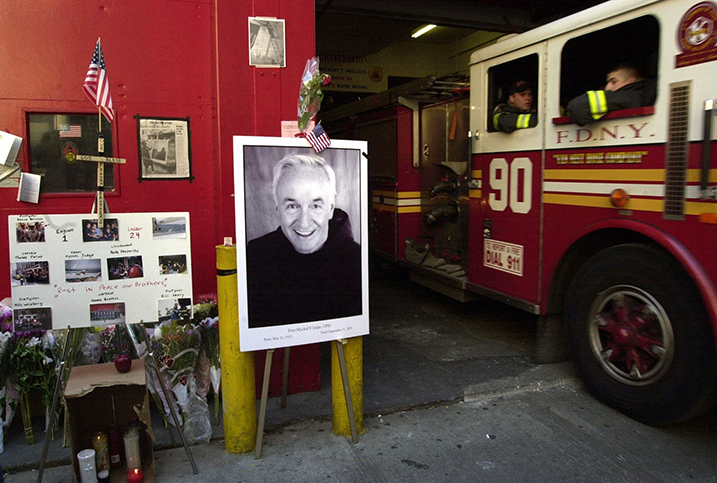 When we arrived at the firehouse on 19th St. the crowd of firemen got very quiet, most of them looked away — they obviously knew why we were there. After a number of calls and consultations we got in the chief’s car and headed down 7th Ave. once again toward the World Trade Center. As the car sped past St. Vincent’s Hospital, I was stunned to see the sidewalk was filled with medical personnel and gurneys at the ready at around 1 p.m. Only later would they learn that no one was coming but they were ready to do whatever was needed.

The chief parked the car on a deserted street beside City Hall. The dust, smell and debris was unimaginable — the set of a horror movie perhaps — as we walked to St. Peter’s Church.  On every block exhausted firemen were trying to catch their breaths, get a cold drink and prepare themselves to return to the terrible task for which they had been summoned.

Finding Mychal
The church was very quiet when we entered. There was a huge crack in the wall on the right, the side facing the street and the collapsed towers one block away. On the left an elderly priest covered in dust quiet prayed the rosary. Mychal’s body so carefully placed before the altar with his helmet, badge and a stole on top of the sheet had already become a place to which the firemen were coming to say a prayer. As we considered what we might do a chief informed us that they thought they needed to evacuate the church, they were not sure how stable the building was.

After several failed attempts to make arrangements to have Mychal’s body transported we were standing in front of the church not sure what to do. Firemen, policemen were all around and a group of FBI people were across the street. There was an explosion on the seventh and eighth floors of the building across the street less than one block away, fire and smoke pouring out the shattered windows and the silence grew deeper as the fire and police personnel in the area look helplessly on.

When the FBI people turned to see what had happened it was clear that one of them was a priest. He was a retired O.M. I. chaplain from Long Island who headed to the city when he heard what happened. He came over to Peter and I and wondered what “the brown robes” might be doing in the midst of the chaos. We explained our dilemma and he said he would see what he could do.

About thirty minutes later he tapped me on the shoulder as we stood quietly in the center aisle of the church. He had arranged for an ambulance to transport Mychal’s body. We needed a plan to take Mychal’s body to a safe place so other arrangements could be made, they were stopping the firemen from entering the church to pay their respects because of their concerns about the stability of the building.

Our instincts told us we should not bring him to the church or the Friary so we decided that the most discreet and unsuspected place would be the firehouse across the street.

Receiving His Body
After radio calls back and forth, we are cleared to go. The firehouse was asked to prepare a place to receive his body. I notified the friars what the plan was and asked them to be ready to come to the firehouse to receive Mychal’s body.

When I arrived at the firehouse with the captain, I was moved by the way the firemen had created a kind of sanctuary in the back of the firehouse, sheets hung from the ceiling, a bunkhouse bed frame for a resting place. As I crossed the street to call the friars, the ambulance was arriving. Once we were assembled a firemen pulled the sheet-curtains closed, the friars, the firemen and little Sr. Emalia, FMM, prayed and wept and, yes, a few humorous comments were made as well.

There are a million other little things that make 9/11 and the days immediately following seem like yesterday. One of my most profound is the faces of the many firemen we passed or encountered along the way that day. Mychal’s ministry among them had surely made a difference. In the midst of all that was happening they kept going, doing what needed to be done, even stopping to pray. Grace and character called forth many saints that day and some of them are still on the ground, ready to respond to the next call.