This is another article in the continuing People of Jandoli series. The purpose of the campaign is to reach out to Jandoli School of Communication students and alumni for their opinions and insights about predominant stories in journalism and communication. Viewers can follow along on the Jandoli School's Facebook, Twitter and Instagram accounts.

On Jan. 6, Americans watched as rioters stormed the Capitol to disrupt the certification of the electoral votes in the presidential race. For many, the date has become dubbed as one of those “Where were you when?” days in American history.

Just two days following the attack, Twitter announced it would ban President Donald Trump’s Twitter account indefinitely over concerns that his tweets incited the attack. The unprecedented decision made by Twitter CEO Jack Dorsey incited a debate over the legality of a social media platform restricting “free speech” and censoring content.

Carole McNall, ’75, a lawyer and assistant professor in St. Bonaventure’s Jandoli School of Communication, and journalism major Jeffrey Uveino, ’21, offered their perspective on this topic as part of our ongoing People of Jandoli series.

It was surprising because it was so unprecedented,” said Uveino when discussing Twitter’s decision to ban the former president from the platform. “The president of the United States getting removed from one of the nation's most popular websites? That's an odd concept for many to comprehend.”

McNall agreed but wasn’t overly surprised with the decision.

“Given the number of controversial tweets he'd posted over his term without consequence from Twitter, I thought they'd decided having him on the service was worth the controversy,” she said.

Some argue that this action sets dangerous precedent. McNall does not think it's a fair conclusion to draw and understands the difficult position many media companies find themselves in.

“I'm more comfortable with this arrangement than I would be with the government having that power,” she said. “If [companies] don't monitor what's posted (and do something about outrageous comments), they draw angry comments,” she said. “But if they do act, they are accused of censorship.”

Uveino agreed but said private companies should have the right to make those decisions on their own terms.

“It's Twitter's right to remove Trump from its platform if the company feels that his use of it is dangerous,” he said. “If a law was made to regulate Twitter's suspension and removal of users, that would infringe on the rights of the company.” 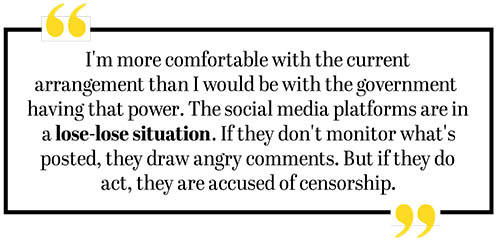 Many find that it is not a corporation exhibiting its rights as a private corporation but a product of a much bigger issue of free speech. McNall does not see the correlation.

"I know people are making it a free speech/constitutional issue, but I think it's really a 'where do you draw the line?' issue,” she said.

The pressing question then becomes, where is that line? Uveino does not have an answer.

“I guess that there is a moral debate at the heart of the situation,” he added.

Both sides of the aisle in Washington, D.C., agree on the need for comprehensive legislation that regulates the digital space. However, like Uveino, McNall said the solution is unclear.

“I am very wary of giving that power to the government,” said McNall. “I'm especially wary right now because we have a federal government that's incredibly polarized and that includes lots of people who don't truly understand the internet.”

As for the future of journalism, McNall and Uveino do not think it is something to be concerned about now, but something to monitor in the coming years.

“I could see social media platforms deciding to reject a news organization, but many news providers have enough resources to go create their own space,” McNall said. She offered the news reports of Trump potentially starting his own media company as an example.

“The app's ability to control which of its users say what feels worrisome, but it only becomes so if the app attacks groups of users that hold certain views or share certain opinions,” said Uveino. “I don't think that will ever happen on a large enough scale that it becomes a problem for the average user to think about.”

Kyle Haller is a graduate assistant in the Jandoli School of Communication. An MBA student, he majored in marketing with a minor in finance at St. Bonaventure for his undergraduate degree. He is a former runner for the men's cross country and track team and was named team captain his senior season in 2019-2020. 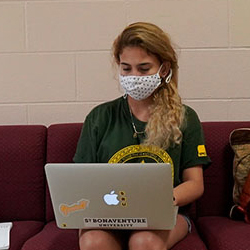