Students and friars offer a blessing before a meal at Mt. Irenaeus, a Franciscan mountain community near campus.

University Ministries welcomes students of all religious affiliations to participate in a variety of opportunities for spiritual growth, service learning, social action and community building. 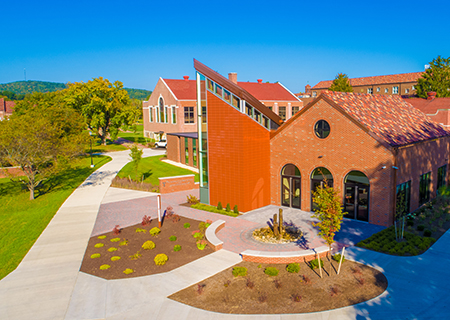 As the nation's first Franciscan university, St. Bonaventure affirms the unique dignity of every person and invites everyone into a community of  acceptance and understanding. All are welcome here.

University Ministries is the focal point for forging these loving bonds of belonging, and for extending this sense of community beyond our campus borders. We strive to share God's unconditional love, particularly with marginalized populations — the needy, ignored and excluded.

We're located in the McGinley-Carney Center for Franciscan Ministry (pictured), located in the center of campus. Opened in 2017, the center houses offices, an interdenominational prayer tower, a great room for student gatherings, and kitchen facilities.

We are committed to transforming the lives of our students inside and outside of the classroom, inspiring in them a lifelong commitment to service and citizenship.

Our liturgical life, centered around Sunday Eucharist, invites all members of the Bonaventure community to join in various liturgical ministries and many prayer opportunities.

Your hub for service-learning, whether it's feeding the hungry, befriending a child, or visiting with a senior citizen. Be a leader in service to others.

The resident friars of this Franciscan community near campus welcome all to relax, hike, garden, sit and talk, or share a home-cooked meal. A special ministry, a special place.

We invite all into the life of the Catholic Church, with liturgical programs, sacraments, worship experiences and opportunities for spiritual growth.

Mass intentions to honor the living and remember the deceased may be ordered online.

A donation to the Franciscan Friars of $15 is suggested for each Mass intention requested. Please know that your intention may be one of two intentions offered at a particular Mass.

You may choose from a selection of cards and make your donation online. We will send you a confirmation with the date that the Mass will be offered, and, if you desire, we will inform people in the university community.

Each December, students may participate in a Franciscan Leadership Pilgrimage to Rome and Assisi through the Franciscan Pilgrimage Program. Participation is open to students of all faith traditions.

The pilgrimage brings together leaders of various faith traditions form Franciscan colleges and universities across the U.S. to reflect on and learn form the vision and values of saints Francis and Clare of Assisi. It includes time for reflection, study, conversation, leisure, relaxation and visits to sacred Franciscan locations  in Assisi and Rome.

Jun 14, 2021, 12:31 PM by Thomas Missel
Undaunted by COVID-19 limitations, the students of SBU Theater produced a video production this spring expressing the power of theater to inspire and revive. 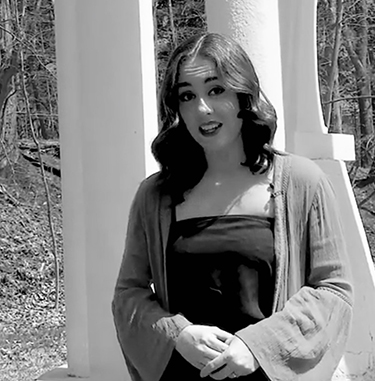 Undaunted by COVID-19 limitations, the students of SBU Theater produced a video production this spring expressing the power of theater to inspire and revive.

“I was so proud of Emily’s decision to open the production up to others and make it a vaudeville for our times,” said Dr. Ed. Simone, director of SBU’s theater program. “She created an entertainment based around a powerful idea and she and her team just ran with it.”

Weber’s concept for the show started with a quote she encountered in one of her theater classes.

“In a documentary about vaudeville, the critic John Lahr said, ‘Frivolity is our species’ refusal to suffer.’ That really made me think,” said Weber. “Right now, we’re doing some suffering and I wanted to produce something to allow an escape, to refuse to suffer.”

The video opened with a shot of a hand turning on the “ghost light,” the ubiquitous light bulb on a stand that illuminates darkened theaters the world over. It’s a sign that something theatrical and wonderful is about to happen. In Weber’s production, the frivolity begins and ends with theatrical dance.

A lifelong dancer, Weber choreographed the two dance pieces that bookend the video: a moody solo piece set to “The Attractions of Youth” by Barns Courtney and an ebullient tap trio set to Paul Simon’s “Me and Julio Down by the Schoolyard.”

“I wanted the first of the dance pieces to express what we’re going through now, but to also say that if you hold on to what you love you’re going to feel better,” said Weber.

“The tap piece is meant to be a joyful celebration, which is why it’s a trio, not a solo,” she added.

The dances, like all of the production, were recorded using COVID-protocol distancing and masks. Keeping students safe was a priority.

“The whole project was done within protocols. We were able to have Emily unmasked for her monologue and her song because they were recorded outdoors after that protocol was changed to allow it,” said Simone. “But even in those outdoor recording sessions, the musical accompanist and camera operator were masked and distanced.”

Weber’s musical accompanist for her outdoor performance of Amy Winehouse’s “Valerie” was senior Jessica Matias, who also accompanied freshman Kaylee Middaugh in the video performance of “Rise Up” by Andra Day. “On with the Show” also featured Matias performing Erik Satie’s “Gnossienne No. 1,” a dada-esque work for solo piano.

“I’d worked on the monologue in class and it stood out to me as having elements in it that reflect me as a person. That was important to include in the project,” said Weber. “It’s a strong exploration piece; I identify with the character of Hypatia and really resonate with how she expresses herself.”

Senior Lauren Barry, junior Catie Duszynski and sophomore Emily Tiedemann wrote and performed the video’s original pantomime, which Weber recorded in black and white. The animated pieces that appeared between the live-action performances were created by sophomore Anna K. Smith and Barry.

“The songs, the pantomime, the music and dance and the animation all came together to celebrate all the performing arts forms, to reflect their inclusivity and to express the beauty in every art,” said Weber.

Weber edited the video production and presented it at a distanced watch party for the cast, artists and crew in the Garret Theater, SBU theater program’s performance lab and historic home, on May 6.

Weber, who received SBU’s 2021 Theater Award, is taking a year to choreograph and teach dance. She then hopes to land a spot in a graduate program for acting.

“I want to keep making art — to keep telling stories that matter,” she said.