History: A Tradition since 1899

The masthead from the early issues of The Laurel. The Laurel was the first student publication at St. Bonaventure's College (as our university was called at the time), appearing in June 1899. The Laurel served both as a literary magazine and a college newspaper. Founded by the students of the college and under the direction of Father Paschal Robinson, O.F.M., it flourished exceedingly well.

The purpose of The Laurel was stated in the introduction for the first issue: “... to aid students in their literary labors and to chronicle the news of the college.” Later in the introduction, the goal was clarified: “We publish our little paper, in order that our literary efforts may appear before the world. Thus, our work will be more practical than it would be if confined to the limits of our classes; and we will derive more benefit on this account.” [1] 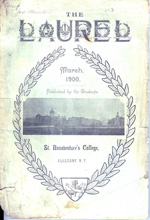 The first editor of The Laurel was Jeremiah Cavanaugh, class of 1900. The first business manager was Lawrence Fell, class of 1899.

The above photo shows the first page of the first issue, from which we've been quoting. The first page lists the original price of The Laurel as “one dollar per scholastic year in advance.” The photo to the right shows the cover of the third issue. Click on either image to see a larger version. [2]

In 1922, the first printing press was installed on campus in Alumni Hall. This enabled the November issue of The Laurel  to be printed on campus for the first time.


Transition to a dedicated literary magazine

In 1932, The Laurel narrowed its scope from literary magazine and college newspaper to publishing exclusively literary articles and art. At this time The St. Bona Venture (now The Bona Venture) took over responsibility for the publication of news for St. Bonaventure.

The Laurel has included essays as well as fiction, poetry and art, black-and white and color photography. It continues to be a splendid outlet for creative students, faculty, staff, and other members of the community.

For the first two years, The Laurel was published quarterly. Since that time, it has been published monthly, and, most recently, biannually with issues in the fall and spring semesters.


The name and the legacy

The name “The Laurel” was given to the magazine by its creators to remind students of the efforts made by the ancient Greeks and Romans to secure the laurel wreath, the emblem of victory. The editor spoke of this emblem in the first issue: “We hope to make The Laurel worthy of its name by keeping it in a flourishing condition.” [1]

Accordingly, the masthead of the first several issues of The Laurel included laurel wreaths, as you see in the image just under the title of this page.

Jeremiah Cavanaugh and his fellow contributors to the inaugural issue would be well-pleased to know that their “little paper” is now the oldest continuously-published college magazine in the United States. In 2020, The Laurel celebrated its 121st year of continuous publication.