St. Bonaventure University’s Arthur O. Eve HEOP Program (HEOP) is a comprehensive program, jointly sponsored with the state of New York, to assist in providing access for all New Yorkers to the state’s private colleges and universities.

This program is designed for students who have the potential and interest in furthering their education but due to certain life circumstances, financial and educational, higher education may not have initially been an option.

Our HEOP staff works to make sure that each student’s individual needs — academic, personal and financial — are met through counseling, tutoring and a comprehensive financial aid package.

A student's academic profile, including high school grades, college board scores and academic history should indicate that he/she would not be admissible under St. Bonaventure University's regular admissions standards, but demonstrate the student's potential for success at the university level.

A student must meet the Financial Guidelines established by the New York State Education Department, with appropriate support documentation.

Economic guidelines can be reviewed by downloading our HEOP Financial guideline sheet 2020-21.

The economic guidelines mandated by the State Education Department of New York are set up according to the number of people in the household. Adjustments are made for families with two workers, one-parent families, and families with unusual and extenuating circumstances. Students must be New York state residents and meet other eligibility guidelines. Please contact the HEOP office at 1-800-462-5050 or HEOP@sbu.edu for further information.

Students and families must be able to provide extensive documentation of their income including, but not limited to, copies of: Free Application for Federal Student Aid (FAFSA); parents’ and student's 1040, 1040A, or 1040EZ, and W-2 forms; Social Services Documentation; Social Security form 1099; and verification of child support. All must be signed by appropriate persons and include the total amount of income received in the prior-prior year.

Are you ready to take the next step to be a Bonnie?
Make your confirmation deposit today.

Note: You may find it helpful to first visit: How to make your HEOP confirmation deposit
Play video (YouTube) 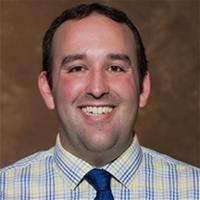 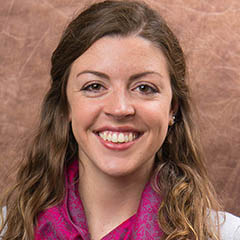 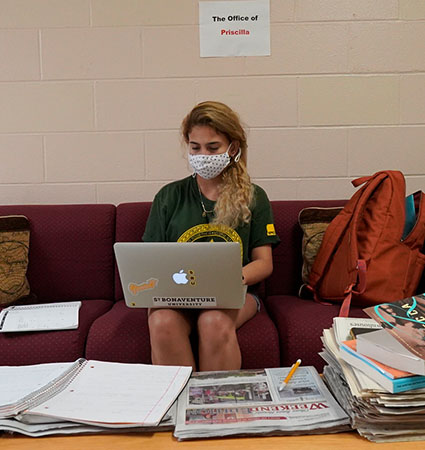 “I’ve made friends here throughout the years who are no longer just friends,” she said. “They are family to me.”

For Contreras, it feels like “just yesterday” that she arrived as an undeclared major with no connection to campus. Now she proudly claims two majors — journalism and English — and holds an “honorary office” in the hallway on the second floor of the Jandoli School of Communication’s Murphy Building.

Her adviser, Dr. Denny Wilkins, professor of journalism, posted the sign that reads “The Office of Priscilla” in recognition of the many hours she spends studying there. 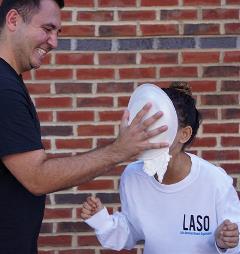 “He did that during my sophomore year when I was taking JMC 201 and 202. Those were hard classes for me and he’s a tough grader,” Contreras said. “I would walk into his office, ask for help, and then go back to my little office until I got it right. Those two classes made me a better writer.”

Wilkins also gives her and his other advisees “a word to live by” each semester, she said, with the expectation that they each share what it was like living with the word.

Composure. Peace. Poise. Purpose. Imagine. These are the words Contreras has lived with for the past few semesters. Of them, peace has been the most powerful for her. “I was going through a rough time when he gave the word to me. It reminded me to slow down, to have peace at mind and peace at heart,” she said. “It meant so much to me.”

Wilkins has appreciated watching Contreras come into her own.

Focused and driven, Contreras has been involved in numerous activities. She serves as photo editor for the student-run newspaper, the BonaVenture, maintains a blog, has hosted a weekly show for the campus radio station, The Buzz, and has written for HerCampus.com. 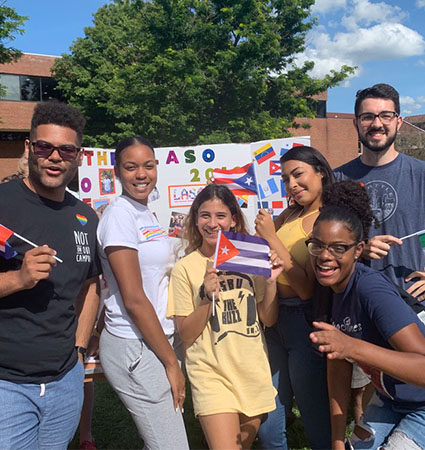 But what she is most proud of is her work with the Latin American Student Organization (LASO), which she joined her freshman year. She is currently running for vice president and previously served as a senator representative with the Student Government Association and as secretary.

“It’s good to get back to your culture and your roots,” she said, noting that the organization was especially helpful to her during her first year at Bona’s. “This is a mainly white institution and sometimes it could feel overwhelming.”

Her mother is Dominican, her father Salvadoran, Contreras said, and she grew up in a neighborhood that is predominantly Hispanic. Being a member of LASO made the transition to life on campus easier and has since allowed her to bring awareness to others about the Latino community.

A lover of the written word, and especially of reporting, her goal is to one day work for ESPN, either as a producer or a reporter. Whatever the future holds, Contreras is determined to keep evolving.

Her motto is simple and to the point: “Don’t be afraid of change and keep on making connections.”