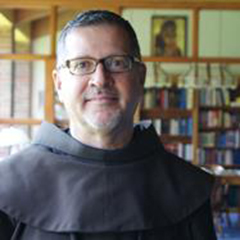 After studying library science at Columbia University (MLS, 1988) and working as an academic librarian in New York City, he entered the Franciscan Order in 1996 and studied at the Washington Theological Union (M.Div., MA, 2003).

As a friar, he lived in Cairo in 2001-02, ministering in a leprosarium; and between 2003-2011 he spent many summers in Egypt teaching English at a Coptic-Catholic seminary in Cairo.

Fr. Michael began teaching at St. Bonaventure University in 2003. After initiating the program in Arabic, he developed and taught a variety of courses in Islamic Studies that comprised a minor in Arabic and Islamic Studies.

He left St. Bonaventure in 2012 in order to complete his doctoral studies in Islamic Studies with the Institute of Arab and Islamic Studies at the University of Exeter, UK. During this time, he served as a chaplain at Georgetown University where he was active in the programs of the Alwaleed bin Talal Center for Muslim-Christian Understanding and the Center for Contemporary Arab Studies. In April 2015 he successfully defended his dissertation, an analysis of the Egyptians in the Qur’an, Islamic Exegesis and extra-canonical texts.

Fr. Michael has traveled extensively in the Islamic world, and has visited and conducted research in Morocco, Tunisia, Egypt, Jordan Syria, Oman, Turkey and India. He speaks widely on various aspects of Islam and Islamic culture including the Qur’an, Islamic spirituality, art and architecture, and Christian-Muslim relations.
ACCOMPLISHMENTS