'I can say this without qualification: I would never have gotten where I am if I hadn't gone to SBU.'

Our graduates have achieved extraordinary success in the competitive sports media industry. Here's a sampling of those who make us proud. 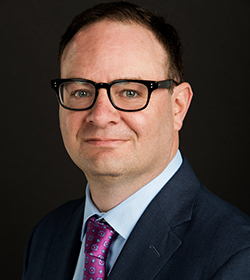 Adrian Wojnarowski has long been considered the most dominant force in reporting on the National Basketball Association. So frequent and accurate are his NBA scoops that they have their own name: Woj Bombs.

Wojnarowski joined ESPN in 2017 after nearly 10 years at Yahoo Sports. In 2017, he became the first ESPN media member to be named National Sportswriter of the Year by the National Sports Media Association. He followed that up with a repeat win of the award in 2018, then again in 2019, a sports media three-peat achieved by only six others.

“Woj is in incredible company winning this award, but he fits right in. He works hard, is never satisfied and is always pushing for the next story, big or small. It’s a well-deserved honor,"  said ESPN NBA Deputy Editor Cristina Daglas.

He hosts “The Woj Pod,” which regularly delivers the biggest stars and newsmakers in the NBA, and “The Woj Report” on ESPN’s YouTube page.

Prior to his work for ESPN, Wojnarowski worked for Yahoo Sports, where he spent nearly 10 years, including two as editor of The Vertical. His standout career in journalism includes nearly 10 years at The Record of New Jersey (where he was twice named the APSE Columnist of the Year), as well as several years each at The Fresno Bee and The Waterbury (Conn.) Republican-American.

With the help of Gale Dickau, an English teacher of five decades at his high school alma mater, Wojnarowski founded and funds the “The Writing Initiative.” The multifaceted program encourages students at Bristol Central High School to write and helps them develop and hone their skills; funds scholarships for college, residential summer writing programs, and numerous educational trips in the Northeast; and develops teacher enrichment programs for educators teaching writing.

Wojnarowski is also the author of "The Miracle of St. Anthony: A Season with Coach Bob Hurley and Basketball's Most Improbable Dynasty," a New York Times best-seller published in 2006.

The Jandoli School honored Wojnarowski with its Alumnus of the Year Award in 2019 and added him to its Wall of Distinguished Graduates. 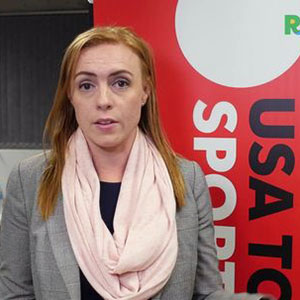 She previously worked at the Orlando Sentinel, Orlando, Florida, covering the University of Florida, from 2010-2012; and from 2006 to 2010 she was a senior sports reporter at the Wilmington StarNews in Wilmington, North Carolina.

At USA Today, Axon has covered a range of issues related to the NCAA, pro and Olympic sports. She was part of a team at USA Today that placed third in the 2013 Associated Press Sports Editors' writing contest for projects reporting in the over-175,000 circulation division, for a special report that examined the risks and rewards for assistant coaches in college football.

Axonl placed second in the 2007 Duke University/Green-Rossiter Award for Distinguished Newspaper Work in Higher Education, and is a two-time winner (2007 and 2009) of the New York Times Chairman's Award. 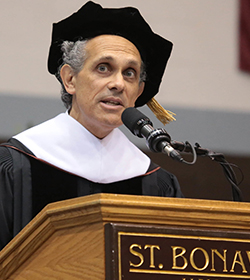 Christopher M. LaPlaca joined ESPN in 1980, less than a year after its launch. Prior to joining the network he was the assistant sports information director at Brown University.

LaPlaca received his bachelor’s degree in journalism and mass communication from St. Bonaventure and since graduation has remained active in support of the university. He serves on the Jandoli School of Communication’s Advisory Council.  He is a founding contributor to the School’s Dick Joyce Sports Symposium, named after the late AP sportswriter and 1960 St. Bonaventure alumnus.

LaPlaca was also instrumental in establishing the Joyce Symposium’s John Domino Award, named after another late Bona graduate and a former ESPN colleague of LaPlaca’s. The award is given to a Bonaventure graduate who best personifies the ideals set forth by the Jandoli School. He also serves on the Jandoli School's advisory council.

He has been honored by the Jandoli School with its Alumnus of the Year Award and has been inducted onto the school's Wall of Distinguished Graduates. He was awarded an honorary doctorate by the university at its 2016 Commencement Exercises, and addressed graduates as that year's Commencement speaker.

Based in Bristol, Connecticut, LaPlaca is also active in his community, having served on the boards of several community organizations. He was awarded the Fred Solani Award for his overall contributions to Bristol's Caring About People program in 2003. 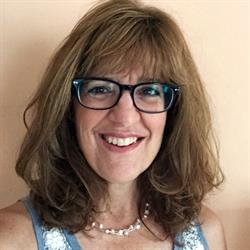 "I have covered nearly every sport over the course of my career," said Ditota. "I have liked and practiced variety in my reporting — the chance to immerse myself in a compelling enterprise piece and the challenge of deadline writing have been equally rewarding. I've also been excited about new media. I've developed a web show for the basketball beat I cover. I've shot and posted video for the web. I've communicated breaking news through Twitter. I've also embraced advanced analytics and have used them frequently in my reporting of trends and topics."

Prior to joining The Post-Standard, Ditota was a writer for a Syracuse business magazine. She is also a former adjunct instructor in the Newhouse School at Syracuse University, where she taught a graduate-level class in sports reporting, and she served as a mentor for the Syracuse City School District. 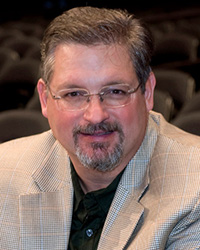 Michael F. Vaccaro, lead sports columnist at the New York Post since 2002, has been named New York Sportswriter of the Year by The National Sportscasters and Sportswriters Association on three occasions: 2013, 2014 and again in 2019.

He has garnered more than 50 writing awards over a career in which he has been privileged to cover multiple Super Bowls, Olympics, World Series, NCAA tournaments and a Stanley Cup Final.Mike's rise to the top of the sports reporting world reveals a record of accomplishment earned through hard work and a devotion to his craft while writing for newspapers big and small across the country.

Before joining the New York Post he worked as a columnist and reporter at the Olean Times Herald, Newark Star-Ledger, Kansas City Star, Middletown Times Herald-Record, and as the sports editor for the Northwest Arkansas Times.

It's a journey Vaccaro says would not have happened if he hadn't enrolled at St. Bonaventure. “I can say this without qualification: I would never have gotten where I am if I hadn’t gone to SBU,” he said. “Because of the size of the school, I was writing for The Bona Venture my first week on campus, writing columns for the paper by my sophomore year, and editing it my junior year. I was taking overnight shifts on 88.3 WSBU-FM, The Buzz, my second month on campus, something I never would’ve been able to do at Syracuse or Missouri. I got to know Dr. Jandoli (the Jandoli School's namesake) very well, a privilege I’ll always treasure.”

Vaccaro has written two books: “Emperors and Idiots: The Hundred Year Rivalry between the Yankees and Red Sox, From the Very Beginning to the End of the Curse” (2005), “1941: The Greatest Year in Sports" (2007). 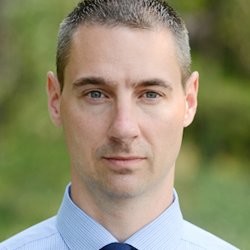 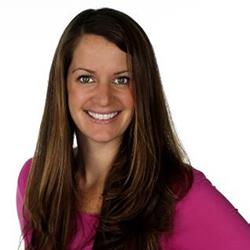 Shannon Dan's leads the Services team for Intersport, a marketing agency based in Chicago. In that role, she directs a collection of people with world-class specialties in content marketing, experiential marketing, sponsorship consulting and hospitality.

Dan has been recognized as a Forty Under 40 Award winner by Sports Business Journal and a Top Women in Digital and "It List" honoree by Cynopsis Media. Additionally, Intersport was named "Best Digital Studio/Production Company" by Cynopsis Media.

While at student at St. Bonaventure, Dan played women's basketball, served as president of the Student-Athlete Association, was a student-athlete mentor, and participated in a number of outreach programs, including serving as a weekly volunteer at the student-run Warming House soup kitchen in Olean. 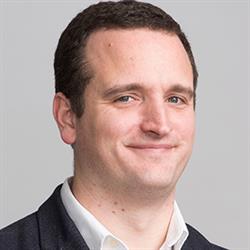 Tim Bontemps has been covering the NBA for @espn since November of 2018. Before that he was the national NBA writer for The Washington Post for three years, providing daily coverage of the entire NBA for the newspaper's print edition and website.

A year into the Washington Post job he moved from New York to San Francisco in order to be closer to the most important story in the league at that time: Kevin Durant's decision to join the Golden State Warriors. While at the Post, Bontemps also hosted a podcast called "Posting Up."

Before joining The Washington Post, he worked for nearly nine years at the New York Post, first as the beat writer for minor league baseball, then as the Brooklyn Nets beat writer. He also began writing a national column covering topics around the NBA.

Bontemps honed his craft as a writer by serving sports writing internships as a student at St. Bonaventure. He was an intern at The Buffalo News in the summer of 2006, and served as an intern in the Sports Department of the Olean Times Herald his junior and senior years. In his senior year, he was the Times Herald's beat reporter for St. Bonaventure's women's basketball team. 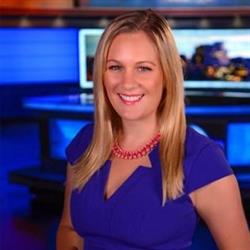 She is presently the Buffalo Bills beat reporter for Sports Illustrated and Maven.

Prior to her return to Buffalo, Shepherd worked as a production assistant for Fox Sports San Diego, assisting with editing and sound for Padres broadcasts. During the NBA season she served as the social media production assistant for all L.A. Clippers games — posting content on Facebook, Twitter and Instagram for the FOX Sports San Diego and FOX Sports West accounts.

Before her move out west, Shepherd spent six years in front of the camera, most recently at WIVB-TV, the CBS affiliate in Buffalo, N.Y.

While in Buffalo, Shepherd was a fill-in sports anchor and reporter covering the Buffalo Bills and Sabres. She also took turns studio hosting “Buffalo Kickoff Live” a half-hour preview show prior to Bills games on CBS.

In her reporting duties, she was won her first AP Award in the category for “Sports Feature.”

Prior to WIVB, she was sports reporter at WSYR-NewsChannel 9, the ABC affiliate in Syracuse, NY, where she covered Syracuse University athletics and local sports in central New York.

At her first stop, Shepherd was the weekend sports anchor at WSAW-TV the CBS affiliate in Wausau, WI. During her time in Wisconsin she covered back-to-back Green Bay Packers playoff seasons, and traveled to the Big Ten Championship to follow the Wisconsin Badger football team.

Shepherd was the sideline reporter for SBU-TV sports for men’s basketball from 2009-2012. She also broadcast women’s basketball games and worked closely with the Sports Information Office, contributing post-game basketball highlight packages, behind-the-scenes documentaries and her GoBonnies.com miniseries “Out Of Bounds.” Shepherd traveled to the 2012 NCAA tournament with the men's and woman's basketball teams. 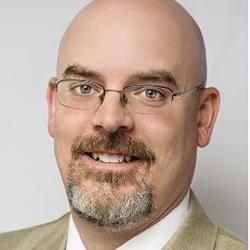 Eric Fisher was named the first U.S. editor at SportBusiness, a London-based sports industry news and intelligence service, in April of 2019. He leads the company's American editorial operations from his New York-area base.

His duties include serving as an ambassador for the U.K.-based brand in the U.S. Moderate sessions at the Sports Decision Makers Summit, a series of global sports industry conferences.

A 25-year veteran of sports and business media, Fisher joined SportBusiness after a 14-year run with Sports Business Journal, where he was a staff writer covering Major League Baseball, ticketing, technology, and digital media. He reported from many major U.S. sporting events.

Fisher previously worked as a sports business reporter for The Washington Post, where he wrote news and feature stories of local, regional and national interest, as well as a weekly column; and as business editor at the Easton Star-Democrat, a daily newspaper on Maryland's eastern shore.

An honors graduate from SBU, Fisher was a staff writer, section editor and associate editor for The Bona Venture student newspaper. He also studied abroad in Ireland. His wife, Maribeth (Franczyk) Fisher, also a Class of 1994 graduate, is an adult services librarian with the Scotch Plains (N.J.) Public Library.