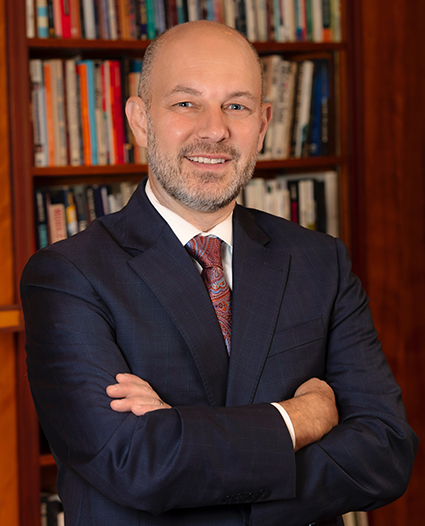 Dr. Jeff Gingerich, provost and senior vice president of Academic Affairs at the University of Scranton, has been named the 22nd president of St. Bonaventure University.

“Seldom in life do you see so many points of interest intersect on one conclusion, but in this case, all facets of the university community converged on a singular belief — that Jeff should be our next president,” said John Sheehan, ’82, chair of St. Bonaventure’s Board of Trustees.

The press conference will be streamed live on the university’s ustream.tv channel.

“I’m so grateful to Joe for his service during these extraordinary times and look forward to a seamless transition this summer,” Sheehan said.

"Jeff has extensive academic administration experience and has shown himself to have a Franciscan heart ... I think he will enrich our tradition and continue the great Franciscan tradition at St. Bonaventure University."

Trustees unanimously selected Gingerich after a nine-month search process led by a committee comprising university trustees, administrators, faculty, staff and students; the committee was co-chaired by trustees Deb Henretta, ’83, and Michael Hill, ’96. More than 60 members of the campus community participated in the on-campus interviews of the finalists.

“I am overwhelmed with gratitude for the opportunity I’ve been given to join the Bonaventure community,” Gingerich said. “I have always had such deep respect and admiration for the Franciscans. Their humility, reflection and sense of community are fundamental in the way I strive to live my life.”

“Having to cope with a pandemic and a president’s tragic death, much like we did during this strange and dynamic time, was important and spoke to his leadership ability, but I think what made Jeff shine is the way he fits into the charism of this institution,” Hill said.

“One of the friars stopped me at the Beef ‘N’ Barrel (restaurant) and by then he had seen all of the candidates. So I asked him, ‘What are your general impressions so far?’ and he told me, ‘That guy walks with (Saint) Francis.’ That comment was representative of the views of many trustees – that he’ll fit seamlessly into a place as special as Bonaventure.”

Gingerich checked every box the university was seeking in a leader, Henretta said.

“When I step back from everything I felt and all that I heard through the deliberations and the feedback from the stakeholder interactions, I think about it in three pillars,” she said. “Jeff is mission-driven, he’s student-centered and he’s a caring, empowering leader.”

“The initiatives that the university has been driving to put St. Bonaventure in a place to allow it to thrive in the future are very important to me,” he said. “There is a culture of innovation here that’s so critical in higher education today.”

Gingerich walked away from two days of campus interviews last week convinced that Bonaventure was a place he wanted to be, professionally and personally.

“Every person I encountered had a spirit about them that made it clear how much they loved and were committed to this place,” he said.

Prior to his role as provost at Scranton, Gingerich spent more than 18 years at Cabrini University in suburban Philadelphia, teaching in the Department of Sociology and Criminology (2005-2018) and serving as provost and vice president for Academic Affairs (2014-2018). He has served as acting president at Scranton and Cabrini, both Catholic institutions.

A key institutional leader throughout the pandemic, Gingerich guided Scranton through unprecedented transitions to online and hybrid formats before the university returned to fully in-person instruction.

An avid supporter of student-centered program growth, Gingerich worked with faculty at Scranton and Cabrini to develop successful new undergraduate and graduate programs, as well as the establishment of the Nerney Leadership Institute, the Slattery Center for Humanities, and four mission-focused academic centers at Cabrini.

Those years of volunteer service made an impact on St. Bonaventure’s trustees and campus community members involved in the search and interview process.

“The man starts his career serving the poor in New Orleans. How incredible is that?” Hill said. “What better role model could we have for our students?”

“When Jeff said that Francis went out to live the gospel of Jesus Christ, that resonated with me. That’s the exact phrase that friars use to profess their way of life,” Fr. Kevin said. “He showed himself to have a Franciscan heart just through his own personal experiences of being sensitive to and responsive to people who are on the margins. This gives me great confidence that he not only understands our tradition, but will enrich it.”

A native of Parnell, Iowa, Gingerich and his wife, Betsy, are the parents of five children. Betsy has 30 years of experience in higher education, including many years at Alvernia University and Cabrini University.