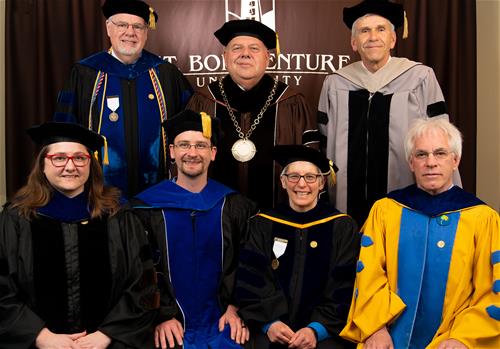 Four St. Bonaventure University faculty members who were honored with awards for professional excellence earlier this spring were recognized Sunday at the university’s 159th Commencement Exercises.

Dr. Barry Gan, who has taught at St. Bonaventure since 1984, has a record of publication and professional excellence that has earned him status as a world renowned scholar, said Dr. Steven Nuttall, associate professor of philosophy at St. Bonaventure, one of four higher education associates to nominate Gan for the award.

“Dr. Gan has published 18 peer reviewed articles and book chapters, been the editor of two national journals in peace and conflict studies, authored two influential books in peace studies, and presented his work at literally scores of conferences,” said Nuttall.

His two books are used extensively at colleges and universities. “Nonviolence in Theory and Practice” (coedited by Robert L. Holmes), now it its third edition, and “Violence and Nonviolence: An Introduction,” are “lauded by students as among the best and most accessible philosophy texts they have read,” said Dr. Andrew Fitz-Gibbon, philosophy professor, chair, and director of The Center for Ethics, Peace and Social Justice at the State University of New York at Cortland.

Dr. Predrag Cicovacki, associate professor of philosophy and peace studies at the College of Holy Cross in Worcester, Massachusetts, uses “Nonviolence in Theory and Practice” in his Peace and Conflict Studies course, and called the text “by far the best book on the market for these kind of courses.”

In addition to Gan’s impressive publication record, he served for 26 years as editor of “The Acorn: Journal of the Gandhi-King Society.” He also has a long association with Concerned Philosophers for Peace, which Fitz-Gibbon described as “the foremost organization of its kind in the United States.”

Gan’s invitation to address the United Nations on the International Day of Nonviolence in 2016 demonstrates that “he is regarded as among the top scholars in the field of nonviolence,” said Nuttall.

Gan is a member of the International Center for Nonviolent Conflict in Washington, D.C., and has served a number of other associations and consortiums for peace and nonviolence. He also has a long record of community and university service. A member of St. Bonaventure’s Faculty Senate every year but one during his tenure, he served as chair from 2010 to 2016 and has chaired a number of its committees and boards.

Gan earned his bachelor’s, master’s and doctoral degrees in philosophy from the University of Rochester.

Dr. Robin Valeri “has amassed an impressive body of work on instances of hate crimes and terrorism,” said Dr. Darryl Mayeaux, professor of psychology at St. Bonaventure, in nominating his colleague for the research and publication award. In her 25 years at St. Bonaventure, he added, Valeri has produced 34 publications and made 58 conference presentations.

In addition to her expansive research portfolio, Valeri is “a noted and sought after speaker from an academic and pop culture perspective,” said Dr. Pauline Hoffmann, associate professor of communication at St. Bonaventure, adding that her work is often referenced in the research of others, and public media seek her out as an expert on hate crimes.

Samantha Gier, who graduated in December 2018 with majors in journalism and mass communication, and political science, worked alongside Valeri as a student researcher for four years. Gier, who’s working at a Buffalo law firm and will attend law school at the University at Buffalo in the fall, described Valeri as an enthusiastic and driven researcher. They presented together at two American Society of Criminology conferences, which Gier called “the two most educational and informative experiences of my college education.”

Valeri has conducted research under two grants from the American Lung Association and seven from St. Bonaventure. She has also served as a reviewer for a number of academic journals including Michigan Sociological Review and the Journal of Qualitative Criminal Justice and Criminology.

She has held a number of leadership positions at St. Bonaventure including academic department chair, associate director of the Francis E. Kelley study abroad program at Oxford, and Institutional Review Board chair. A resident of Cuba, New York, she served on the Cuba Library Board of Trustees for 11 years and is an active member of the Cuba Fire Department. She is also a nationally certified fire investigator and a member of the Allegany County Fire Investigation Team.

Dr. Scott Simpson, assistant professor of chemistry, has made outstanding contributions in teaching, research and publication, and service in his three years at St. Bonaventure, said Dr. Adam Brown, associate professor of education, in nominating Simpson for the Junior Faculty Award for Professional Excellence.

“Dr. Simpson’s evaluations are laudable and show higher than average on all measurement points,” said Brown, adding that he hears “over and over” from students about Simpson’s engaging and effective teaching style.

Six of his current or former students submitted letters enthusiastically endorsing his nomination for the award, noting he is not only knowledgeable and friendly, but accessible, whether in his office after class, or via email in the evenings and on weekends.

“He is the reason I came to Bona’s,” said Katie Heitzman, a freshman biochemistry major from West Richland, Washington. During a visit to SBU her senior year in high school, Simpson talked to Heitzman and her father, then took them on a 90-minute tour of science departments and labs. “He made me feel like I was already part of the community … and I was absolutely sold,” said Heitzman. In class, she added, Simpson is “dynamic, funny and an incredible teacher … it’s a class I consistently look forward to.”

His chemistry colleague, Dr. Ashley Evanoski-Cole, said Simpson is not only “the most enthusiastic professor that I know,” but a productive researcher who involves students in his work. He has published in high-level journals and co-authored papers with students. Simpson is also engaged in service at SBU, having served multiple committees and participated in department events; and in the community, where he visits local schools to promote STEM education, said Evanoski-Cole.

In nominating Dr. Christine Uhl, assistant professor of mathematics, for the Junior Faculty Award for Professional Excellence, Dr. Maureen Cox, associate professor of mathematics and department chair, uses adjectives such as confident, outstanding, enthusiastic and approachable. “She has a combination of personality, social skills, and effective practices that draw both students and faculty to her,” said Cox.

Another mathematics colleague, Assistant Professor Dr. Christopher Hill, called Uhl “an utterly dedicated and passionate teacher,” and added that in just three years on campus she has “distinguished herself in teaching and service, while continuing her vibrant research program.”

Uhl practices a form of teaching known as inquiry-based learning, a student-centric methodology that encourages students to formulate proofs on their own, with some preliminary information and guidance from the professor. “Studies done on IBL have shown that student engagement and learning are much higher than in a traditional lecture class,” said Cox. “Members of my department had become interested in IBL in the last several years, but Dr. Uhl’s arrival acted as a catalyst that helped some of us take the plunge.”

In his endorsement of Uhl for the award, Dr. David Hilmey, dean of Arts and Sciences, cited her engagement “in a variety of service activities,” including being a member of the Faculty Senate’s Academic Standards Committee and the All Bona Reads Committee. Uhl is also co-organizer of two math contests for regional schoolchildren, MathCounts and Challenge 24, and founder of the campus Math Club.

Uhl was also a principal investigator on a successful National Science Foundation grant, and is working on another NSF grant to improve student retention and student success in STEM fields. An active researcher, she has one published paper and others in development.

One of her most endearing and significant traits is her collegiality, said Dr. Mary Rose Kubal, associate professor of political science. Uhl has effectively worked the university’s social network to pull people out of their “tribes” and “silos” and into a broader community. In short, said Kubal, “Christine has made the university a nicer place to work.”

About the University: The nation’s first Franciscan university, we believe in the goodness of every person and in the ability of every person to do extraordinary things. St. Bonaventure University cultivates graduates who are confident and creative communicators, collaborative leaders and team members, and innovative problem solvers who are respectful of themselves, others, and the diverse world around them. Named the #1 regional university value in New York and #2 in the North by U.S. News and World Report, we are establishing pathways to internships, graduate schools and careers in the context of our renowned liberal arts tradition.