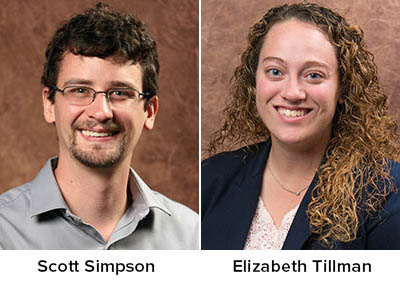 Two St. Bonaventure University professors have been honored by their colleagues with awards of excellence for the 2021-22 academic year.
Dr. Scott Simpson, associate professor of chemistry and Department of Chemistry chair, was awarded the Professional Excellence in Research and Publication Award, while Dr. Elizabeth Tillman, assistant professor of political science, received the Junior Faculty Award for Professional Excellence.
Simpson and Tillman were recognized at the Staff & Faculty Excellence Awards at 3:45 p.m. Thursday, April 28, at the Rigas Theater in the Quick Center for the Arts. (Simpson was ill and unable to attend.)
Simpson’s research and publications record represents “one of the most rigorous, consistent and prestigious contributions made to one’s field” that Dr. Adam Brown, professor of education, said he has seen in his 22 years at St. Bonaventure.
Over the past 10 years Simpson has published 29 articles in peer-reviewed journals, a rate that is “exceedingly rare” for someone at a teaching institution, said Brown. Simpson’s agenda to get SBU students publishing scientific research has resulted in several co-authorships for students. In addition, Simpson has had eye-popping success in the highly competitive grants market.
Simpson has secured more than $700,000 in external funding for his research including a prestigious National Science Foundation CAREER grant for $544,892 to support his continued research into “molecular corking,” which energy experts see as a potential solution to the global problem of safely storing and transporting energy-rich hydrogen. He is also working with University at Buffalo researchers on ways to combat so-called “forever chemicals,” those that do not break down easily and are known to cause cancer and other health issues.
“I’m impressed by Scott’s ability to secure grants … most impressively the National Science Foundation CAREER Award. This is the NSF’s most prestigious award for early-career faculty,” said Dr. Eva Zurek, professor of chemistry at UB and Simpson’s research colleague. “I consider Scott’s achievements outstanding both in terms of research and education.”
Simpson’s work is even more noteworthy because he involves students in his research, said Dr. Kellie Gast, assistant professor of chemistry at St. Bonaventure.
“The Simpson research group is active around the year and is very successful. There are always students chomping at the bit to join his group,” said Gast. “In the classroom, he engages students with demonstrations weekly and has open discussions daily. His dedication to his students is very evident.”
Simpson earned his B.S. in chemistry from the State University of New York at Fredonia in 2010 and his Ph.D. in chemistry from University at Buffalo in 2014. Prior to joining the St. Bonaventure faculty in 2016 he was an assistant professor of chemistry at Alfred State College and a chemistry lecturer at Penn State Behrend. He is also a graduate of the Allegany-Limestone School District.
His awards include a 2019 SBU Junior Faculty Excellence Award, the University at Buffalo Graduate School Excellence in Teaching Award, the SUNY Fredonia Outstanding Chemistry Senior Award, and the SUNY Fredonia Van Valkenburg Award for Service.
Simpson serves on St. Bonaventure’s Lenna Visiting Professor Committee and is a reviewer for more than a dozen scientific journals including The Journal of Hazardous Materials, the Journal of Chemical Education, and the International Journal of Environmental Research and Public Health.
Junior Faculty Award winner Tillman is “a superb professor and a promising scholar; a young professor who understands the unique academic and social needs of her students,” said Dr. Ibrahim Zabad, professor of political science. “She spares no means to deliver and simplify the course material to her attentive students.”
Students feel at ease in her classroom and “actively and enthusiastically ask questions, raise issues and answer inquiries,” said Zabad.
Tillman does not wear the “easy grader” label, which “makes her excellent teaching evaluations and general popularity with our students even more impressive,” said Dr. Mary Rose Kubal, associate professor of political science and program chair.
A number of students submitted letters in support of Tillman’s nomination. “It seemed like I had a say in what I learned,” wrote one student. Another called her “fun and engaging, while being strict when she needs to be,” and a third described her as “incredibly smart and an amazing teacher.”
Tillman’s excellent teaching record “does not come at the expense of service to the university,” said Kubal. Tillman advises Honors students and is co-director of the university’s Center for Law & Society. She also serves on the Student Government Association Constitution Revision Committee.
Tillman earned her bachelor’s degree in human relations from the University of Pittsburgh at Bradford, and her master’s and Ph.D. in political science from the State University of New York at Buffalo. Prior to her start at St. Bonaventure in 2018 she was an instructor of political science at UB and an adjunct instructor in the Department of Behavioral Sciences at Pitt-Bradford.
She serves as a member and committee chair of the Pitt-Bradford Alumni Association Executive Board and as a student debate judge for Erie 1 BOCES.
_____________
About the University: The nation’s first Franciscan university, St. Bonaventure University is a community committed to transforming the lives of our students inside and outside the classroom, inspiring in them a lifelong commitment to service and citizenship. St. Bonaventure was named the #5 regional university value in the North in U.S. News and World Report’s 2022 college rankings edition.
Share on Facebook
Share on Twitter
Share by E-Mail
All Rights Reserved © 2023