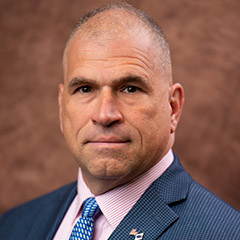 After eight years I was accepted to the Interservice Physician Assistant Program (IPAP) at Fort Sam Houston, Texas. After graduation and commissioning, I was assigned to the 10th Mountain Division at Fort Drum, New York, where I had the opportunity to attend the Flight Surgeons course and become an aeromedical physician assistant (APA).

In 2004, I deployed to Iraq in support of Operation Iraqi Freedom (OIF) with the 2nd Battalion, 14th Infantry Brigade, and was awarded the Combat Field Medical Badge (CFMB). Back at Fort Drum, I transitioned to the 10th Aviation Brigade, taking over as the brigade surgeon and chief of the Aviation Troop Medical Clinic.

When I left the service in 2007, my wife and I moved back to her hometown of Portville, New York, with our two children. I have worked in emergency medicine since then in the local community hospital and numerous facilities in Western New York with TeamHealth. My time with TeamHealth afforded me the opportunity to advance in leadership positions as a physician assistant.

Working as the regional director of Advanced Practice Clinicians (APCs) allowed me to influence both regional and national leaders of one of the largest healthcare delivery companies in the United States. My experience working with the TeamHealth National APC Council to address issues affecting APCs was very rewarding as we worked to continually advance our profession.

As I begin my career at St. Bonaventure, where I also serve as faculty adviser for the SBU Chapter of Student Veterans of America, I hope to be able to relate to my students from a perspective of someone who has worked his way up in his career, has practical knowledge to impart, and is passionate about the profession.
ACCOMPLISHMENTS
TEACHING PHILOSOPHY
CURRENT RESEARCH INTERESTS/PROJECTS
PERSONAL INTERESTS/COMMUNITY INVOLVEMENT
LINKS
All Rights Reserved © 2022