Oxford is a town rich in history and steeped in a tradition which links its beginnings with St. Frideswide, supposedly a Mercian princess who became a nun in a monastery founded there at her behest, and who died in 735. 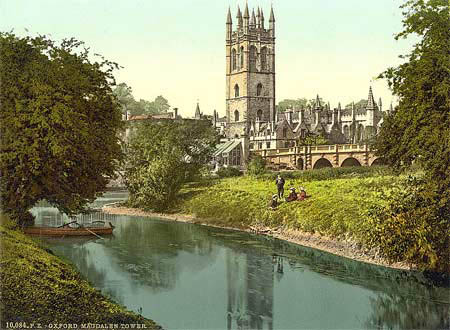 It was first established on low lying ground where the River Cherwell meets the River Thames, and was one of a system of fortified towns set up as a defense against the Danes. The town gradually expanded and by the 11th century was among the largest settlements in England. It boasted 1,000 houses, 11 churches, and a castle, which was largely destroyed in the 17th century. There was even a royal residence there.

During the Middle Ages, Oxford's economy, which depended on cloth and leather, flourished, and this led to further suburban expansion and to the establishment of Oxford University. The presence of a university attracted friars to the town. The Dominicans settled there in 1221, the Franciscans in 1224, the Carmelites in 1256, and the Augustinians in 1267.

Although the university brought prosperity to the town, there was often conflict between "town and gown" because each was governed separately. There were regular riots from the early 13th century. The Black Death in the later Middle Ages wiped out about one third of Oxford's population and its economy began to decline. The university, however, expanded by acquiring much of the city's property, and later, when Henry VIII dissolved the monasteries and friaries, much of their property passed to the university.

Oxford was transformed during the reign of Queen Elizabeth I when the sons of aristocrats were encouraged to spend time at the university. It acquired city status when the diocese of Oxford, with its cathedral at Christ Church, was created in 1542. There followed a period of growth for both the city and the university, which was interrupted in the 1640s by the Civil War, when Oxford became the capital of Royalist England and housed King Charles I at Christ Church. 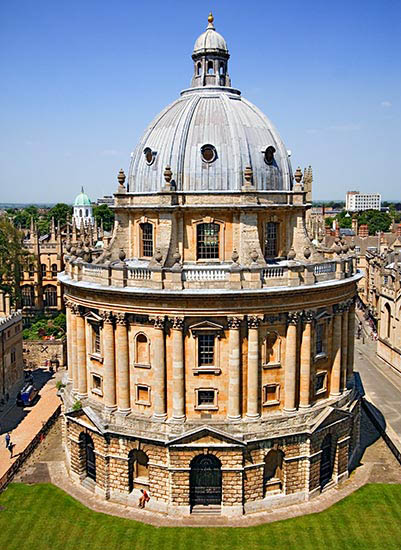 The city however, excelled in architecture, having fine buildings like the Radcliffe Camera (1748) and the Radcliffe Observatory (1794).

The 18th century was a period of relative calm between "town and gown" and of frantic activity by the city's administrators, who organized much demolition and rebuilding. This led to further expansion, including many housing developments for college servants, the working class, and the better off.

During the 19th century, prices of goods rocketed. This was mainly due to the more fashionable establishments allowing their customers long-term credit. Many accounts were never settled; so prices in Oxford were always higher than elsewhere.

Unemployment became a problem because of the long university vacations. Many businesses depended upon student trade. Later in the century however, the university began a rapid expansion which helped Oxford's economy by keeping the building trades buoyant. The growth of tourism also helped to boost the economy.

The university changed radically during this time, as the old clerical establishment was gradually dismantled and replaced by a more modern institution devoted to teaching and scholarship. 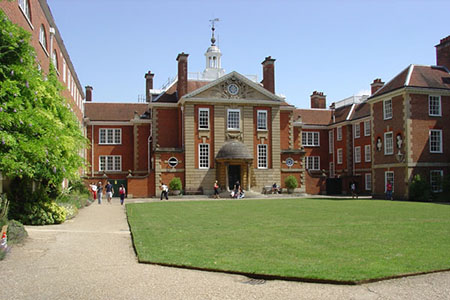 The first two women's colleges opened in 1879 - Lady Margaret Hall and Somerville - but, although allowed to take exams, women were not formally awarded degrees until 1920.

The auto industry flourished in Oxford in 1912 when William Morris (later Lord Nuffield) built his first motor car. But the decline of the industry in the later 20th century presented problems. The university however, has become once again a major influence on the city's economy. It benefited greatly from the philanthropy of Lord Nuffield. He founded one of the 38 colleges that make up the university and donated large sums for medical and scientific research.

Oxford has become Britain's chief publishing center outside of London and it houses one of the largest medical research complexes in Europe. It also remains one of the country's great tourist attractions.

Trinity College is one of the smaller Oxford colleges in terms of student numbers, which makes it more friendly. It occupies an exceptionally spacious site with some of the most beautiful gardens and buildings in Oxford.

The Bodleian Library and the other major University buildings are only a few yards from our front entrance on Broad Street, and the science area is a short walk from our back gate on Parks Road. 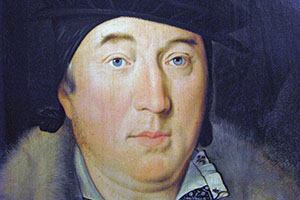 Trinity College was founded by Sir Thomas Pope in 1555. A devout Catholic with no surviving children, Thomas Pope saw the Foundation of an Oxford college as a means of ensuring that he and his family would always be remembered in the prayers and masses of its members.

He came from a family of small landowners in Oxfordshire, was trained as a lawyer, and rose rapidly to prominence under Henry VIII. As Treasurer of the Court of Augmentations he handled the estates of the monasteries dissolved at the Reformation, and amassed a considerable personal fortune.

Pope was a discreet and trusted privy counsellor of Mary Tudor, and it was from Mary and Philip that he received Letters Patent and royal approval for his new foundation. Pope died in 1559. Although his religious ideals were never fully realized — Elizabeth I had succeeded her sister and England returned to the Protestant faith - nonetheless the memory of his name, like his college, has endured the fluctuating fortunes of over 400 years. 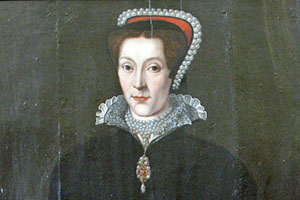 His wife, Lady Elizabeth Pope, was a particularly influential figure in Trinity's early years. Pope's foundation was for a President, twelve Fellows and twelve scholars, all supported by the income from his generous endowment of lands, and for up to twenty undergraduates. The Fellows, all men, were required to take Holy Orders and remain unmarried. The College Statutes set out rules for a simple monastic life of religious observance and study. The Garden was an informal grove of trees, mainly elms, amongst which the members of the College could walk and meditate.

Trinity saw many significant changes in the last century, and many of these are reflected in the more modern buildings of the College.

The undergraduate Library was built in 1928 as a memorial to the 155 members of Trinity who died in the First World War. The years following the Second World War were another period of great expansion of student numbers within the University, and Trinity's Cumberbatch building was completed in 1966 to provide increased accommodation. Women were admitted to Trinity College in 1979.
All Rights Reserved © 2021